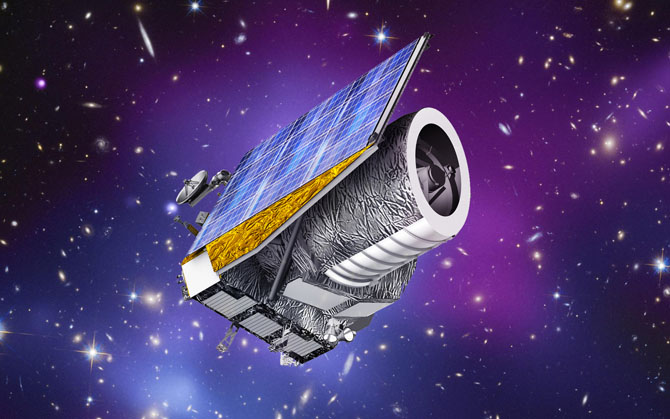 Euclid CCD273 is a charge coupled device (CCD) used in a 6 x 6 detector focal plane of the VISible imaging instrument VIS on board of the Euclid telescope. The CCD273-84 sensors have been designed and manufactured exclusively for Euclid by Teledyne- e2v technologies. The sensors are designed to provide a maximum charge transfer efficiency (CTE) to minimize distortions to source shapes. Each sensor undergoes a rigorous on-ground electro-optical testing at MSSL at several stages of the mission to ensure that strict requirements are met before the launch of the spacecraft.

Euclid is an ESA mission to map the geometry of the dark Universe. The mission will investigate the distance-redshift relationship and the evolution of cosmic structures by measuring shapes and redshifts of galaxies and clusters of galaxies out to redshifts ~2, or equivalently to a look-back time of 10 billion years. In this way, Euclid will cover the entire period over which dark energy played a significant role in accelerating the expansion.

ESA’s Euclid mission, to be launched in 2020, is set to provide a unique window into the evolution of our 13.8 billion year-old Universe. It will map the history of the Universe’s structure by studying billions of galaxies. In this way, it will be able to probe the nature of invisible dark matter, which makes itself known by the forces it exerts on ordinary matter, and the mysterious dark energy that drives the accelerating expansion of the Universe. Dr Magdalena Szafraniec with one of the CCDs for Euclid, the mission to understand dark matter and dark energy.