This four-year programme offers an extra year over the Physics with Medical Physics BSc in which you will extend your knowledge by taking additional advanced modules. You are advised to apply for the MSci programme initially but transfer between the BSc and MSci is possible during the first two years.

Grades
AAA
Subjects
Mathematics and Physics required at grade A.
GCSEs
English Language and Mathematics at grade C or 5. For UK-based students, a grade C or 5 or equivalent in a foreign language (other than Ancient Greek, Biblical Hebrew or Latin) is required. UCL provides opportunities to meet the foreign language requirement following enrolment, further details at: www.ucl.ac.uk/ug-reqs

Grades
AAB (more about contextual offers)
Subjects
Mathematics and Physics required at grade A.
GCSEs
English Language and Mathematics at grade C or 5. For UK-based students, a grade C or 5 or equivalent in a foreign language (other than Ancient Greek, Biblical Hebrew or Latin) is required. UCL provides opportunities to meet the foreign language requirement following enrolment, further details at: www.ucl.ac.uk/ug-reqs

Points
38
Subjects
A score of 18 points in three higher level subjects including grade 6 in Mathematics and Physics, with no score lower than 5.

Points
36 (more about contextual offers)
Subjects
A score of 17 points in three higher level subjects including grade 6 in Mathematics and Physics, with no score lower than 5. Grade 6 in Higher Level Mathematics required.

Not acceptable for entrance to this programme

Successful completion of the WBQ Advanced Skills Challenge Certificate plus 2 GCE A-Levels at grades AAA to include Mathematics and Physics.

The English language level for this programme is: Standard

We offer the option of studying a three-year Physics with Medical Physics BSc or a more in-depth four-year Medical Physics MSci programme. The first two years of study for both programmes are identical and transfer between the two is possible up to the end of the second year. We advise applying for the MSci initially which makes it easier to defer your decision.

In the first year, you will receive an exciting introduction to all the major medical imaging techniques employed in modern hospitals, including X-ray imaging, computed tomography, magnetic resonance imaging, ultrasound, nuclear isotope imaging and electroencephalography.

In your second year, you will explore the physics of the human body - covering such topics as blood flow, lung function and thermal regulation - and biophysics, in which you will focus on topics including biological polymers, gas and fluid transport processes, membranes and nerve signals.

During years three and four you will choose three medical physics modules each year from a range of options and, in your final year, you will work on a major project with one of the department's research groups.

An indicative guide to the structure of this programme, year by year.

All second year modules are compulsory.

You will select three of the following:

Plus three of the following Medical Physics options:

Students are able to take an appropriate module outside of those listed above at the discretion of the Programme Tutor.

You will select 1.5 credits of further medical physics options (see below), plus 1.0 credit from suitable physics or approved outside options.

As well as attending lectures, you will also participate in tutorials and practical work, including projects. Projects are conducted in active, well-equipped research groups, often involving collaborations with local hospitals. Many medical physics lectures and projects are taken by a mix of medical physics and medical students, reflecting the multidisciplinary nature of the work performed in hospitals and universities.

Modules are normally assessed by a combination of coursework and end-of-year examination.

Our degrees are accredited by the Institute of Physics and, as well as a career in medical physics, you will have access to the same wide diversity of careers as with any other UCL physics degree.

Physicists tend to be logical, numerate problem solvers and there is a demand for people who have developed such skills in a wide range of careers. If you are focusing on a career in medical physics there are three main paths.

Firstly, you can train as a medical physicist in the health service. Secondly, you can follow a career in industry: MRI scanners, radiotherapy equipment, and physiological monitoring equipment, for example, all need researching, manufacturing, supplying and maintaining. Thirdly, you may pursue a career in research, probably initially by taking a higher degree - an MSc or a PhD.

“In 2014 I was part of the UROS programme (Undergraduate Research Opportunities Scheme), which allowed me to receive a bursary to undertake my own research. As my first taste of research, it meant I could experience working in a laboratory and share an office with PhD students and post-doctoral researchers. This helped me to make an informed choice about whether I wanted a career in research or not, and to network with others who could help me with my final year project.” Esther Uwannah - Medical Physics MSci 2015

“The department offers plenty of careers guidance with close links to many in research and those who work in the healthcare industry. My final degree will be accredited to the Institute of Physics so my career options are currently still very broad, but I will most likely look for a career in the biomedical engineering industry, or possibly in research.” Adam Doherty - Medical Physics MSci Third Year

Your application will be especially interesting to us if you can demonstrate your interest in the medical applications of physics and engineering. You should be motivated by a desire to apply your training to the pursuit of improvements in the diagnosis and treatment of disease. Relevant work experience, project work and your knowledge of issues and current affairs surrounding this field will assist your application.

Shortlisted candidates will be invited to visit UCL and tour the two departments in which your teaching will take place. During your visit you will be able to view our facilities and meet staff and current students.

This four-year programme offers an extra year over the Physics with Medical Physics BSc in which you will extend your knowledge by taking additional advanced... 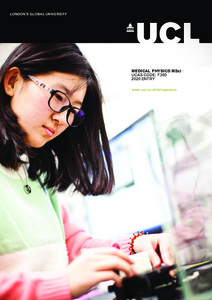