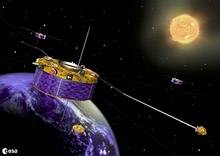 The Cluster II mission, together with the Solar and Heliospheric Observatory (SOHO), forms the First Cornerstone of ESA's Horizon 2000 programme. The mission was designed to study the magnetosphere with a fleet of four identical spacecraft orbiting together and is the first mission to make such observations.

The original Cluster mission was destroyed in the launch failure of Arianne 501 on 4th June 1996. In April 1997, approval was given by ESA to rebuild the Cluster mission, producing three brand-new spacecraft and a further spacecraft made from spares from the original mission (originally known as Phoenix).

Cluster II was successfully launched from Baikonur in Kazakhstan in two Soyuz-Fregat rockets on the 16th July and 9th August 2000. The two pairs of spacecraft were brought into formation on the 15th August 2000 and a 6-month commissioning phase began. On 1st February 2001, the spacecraft began routine operations, making more detailed observations of the magnetosphere than ever before.

Details about the Cluster mission, its history, operations and other instrumentation can be found on the ESA Cluster pages. Videos prepared for the 10th anniversary of the mission, describing the mission and its science goals, can be found on YouTube.