What is Space Plasma?

The universe is made of up of space plasma, the fourth state of matter.

The universe is made of up of space plasma. Plasma is the word given to the fourth state of matter (solid, liquid, gas, plasma). A plasma is a gas that is so hot that some or all its constituent atoms are split up into electrons and ions, which can move independently of each other. Because they are made up of electrically charged particles, plasmas can be strongly influenced by electrostatic and electromagnetic fields and forces, which can lead to very complex and interesting behaviour.

Plasmas are found throughout the Solar System and beyond: in the solar corona and solar wind, in the magnetospheres of the Earth and other planets, in tails of comets, in the inter-stellar and inter-galactic media and in the accretion disks around black holes. There are also plasmas here on Earth, ranging from the inside of a nuclear fusion reactor to a candle flame.

In the Space Plasma Physics Group, we study plasmas in the Earth's magnetosphere and the solar wind, and what happens when they interact. 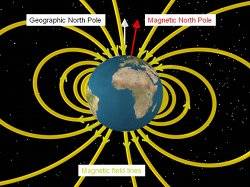 The Earth has a magnetic field that is generated by electric currents flowing in its liquid outer core. It can be detected using a simple magnetic compass - from the UK a compass points north if you hold it horizontally and into the ground if you hold it vertically. If you were to do this experiment at lots of points on the Earth's surface you'd find out that the Earth's magnetic field look like that of a bar magnet - a magnetic dipole. 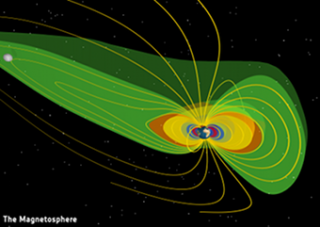 All of the plasma in the magnetosphere comes from either the ionopshere or the solar wind. One of the great mysteries of the magnetosphere is how all of these different plasmas are produced from only those two starting points.

The Magnetosphere and the Aurora 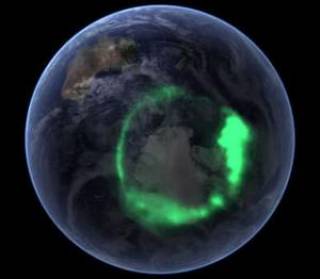 It is because we have a magnetosphere that our planet has the spectacular aurora borealis and australis - the northern and southern lights that can often be seen at night near the arctic and antarctic circles. The aurora are caused by electrons from the magnetosphere being accelerated along the Earth's magnetic field into the upper atmosphere, where they collide with atmospheric particles at altitudes between 100 and 200km. The brightest colour of aurora, green is caused by electrons hitting oxygen atoms in the atmosphere.

Images from space have shown us that the aurora form ovals centred around Earth's magnetic poles. The radius of these ovals get larger and the aurora move to lower latitudes when the Earth's magnetosphere is strongly affected by the solar wind or engulfed by a coronal mass ejection, a massive explosion of solar plasma and magnetic field that travels through the solar system, often at speeds much faster than the normal solar wind.

During the strongest events the auroral oval can reach as far south as the UK. Sign up to aurorawatch to receive alerts when you can see the aurora in the UK! 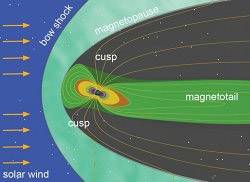 Space Weather is the name we give to the effect the interaction between the Sun and the Earth has on our technology and society.The magnetosphere acts as a protective shield, stopping the majority of the Solar Energetic Particle radiation from the solar flares, and cosmic rays from the wider galaxy and beyond, from reaching the Earth. 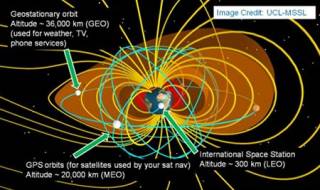 Even though it does a good job of protecting us, the magnetosphere isn't completely benign. It is home to the dangerous radiation belts, regions of space filled with highly energetic protons and electrons that are harmful to astronauts and can damage spacecraft. The radiation belts are much more dangerous in the hours and days after the magnetosphere has been hit by a coronal mass ejection or exposed to particularly strong solar wind. The orbit of the GPS constellation and Geosynchronous orbit, the location of the vast majority of communications satelites, are both within the outer radiation belt which makes them vulnerable during some space weather events.
Space Weather: Effects on the ground

Space Weather and the dynamics in the magnetosphere can also effect the surface of the Earth and our atmosphere. During space weather events there is a higher than usual flux of charged particles impacting the upper atmosphere. This can subtly change the conditions in the ionosphere and interfere with radio and satellite comunications. These increased particle fluxes are strongest at the poles so can also result in diversion of transpolar flights. 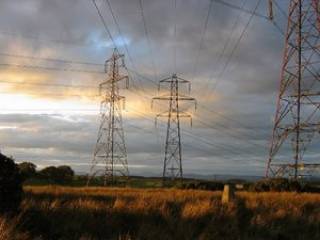 It is only by properly understanding the magnetosphere and how it interacts with the solar wind that we can accurately predict and mitigate the effects of space weather on our society.