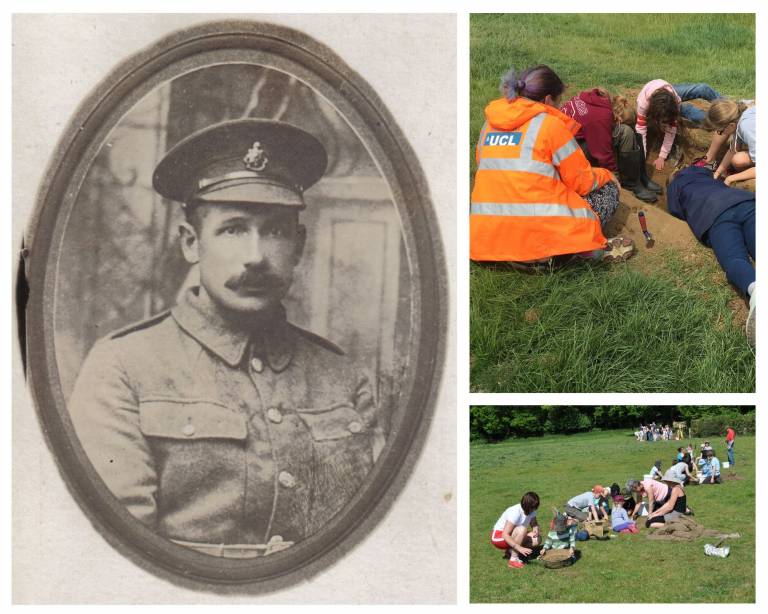 Richard Henry Page was born in the village of Newick, East Sussex in 1881. He was the fifth child of Richard Page Snr., an agricultural labourer, and his wife Emily, who were both from nearby Fletching.

By 1891 the Page family were living some distance from the centre Newick in a property listed as Styences. Ten year old Richard was a pupil at the village school, and had four younger siblings, Robert, Percy, Doreen and Mabel and a nephew, George living at the property. The cottage may have been in some state of disrepair at the time, as it was demolished only a decade or so later.

Following the positive identification of the site of Styences from cartographic sources, the landowner Mr John Sclater kindly invited ASE to undertake archaeological work at the site involving children from the local primary school. The Stiances Archaeological Project (which uses the modern field name) was instigated in 2010. 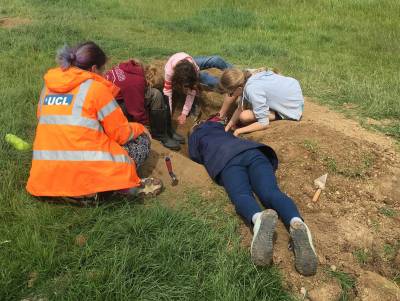 Moving away, marriage and family

By 1901 Richard, now aged 20, had moved away from Newick, and the census of that year shows that he was working as a porter in a hotel in Eastbourne. He married Maggie Davis at Eastbourne Registry Office in October 1901. By the time of the census of 1911, the Pages, now with three children, Archibald, Amy and Gertrude, were living at No. 71, Cavendish Place, Eastbourne. The couple went on to have a second son, Cecil.

Joining up, training and a brush with military authority

When war broke out, the Pages were apparently still living in Eastbourne, and the rare survival of his military records at The National Archives show that Richard joined up in the town on 11th June 1915. He gave his age as 35 years and 199 days (although he was actually 34 years and 199 days old), and his occupation as Outside Porter. He was 5ft 7¾in tall, weighed 126lbs and had a chest measurement of 36in. His address was 20 Bexhill Road, Eastbourne, and his next-of-kin was given as his wife Maggie.

No.7164 Private Page was posted to the 3rd Battalion of the Royal Sussex Regiment, and duly arrived for basic training at the Regiment’s depot in Chichester on 16th June 1915.

During this training, Richard fell foul of military authority, arguably for entirely understandable reasons. Much of the Royal Sussex Regiment’s training was undertaken on The Downs and Richard was sent to a training camp at Newhaven later in the summer of 1915. It appears the temptation to visit his wife and children in nearby Eastbourne proved irresistible, and his records show that he was found to have been absent from the camp without leave (AWOL) from 9.30pm on 1st August 1915 until 9.00pm on 4th August 1915, a serious offence. Clearly the circumstances were taken into consideration and he was sentenced to a lenient 7 days ‘confined to barracks’, and forfeiture of 4 days’ pay (corresponding to the period he was AWOL).

Richard was transferred to the recently-formed Machine Gun Corps on the 1st January 1916, at a time when battalion machine gun companies were being moved en masse to the new formation, which had been set up to allow tighter organisation (and hence efficiency of firepower) for the British army’s rapidly increasing number of available machine guns.

Richard sailed from Folkestone to Boulogne as No. 26750 Private Page on the 25th March 1916. He joined the 165th Company of the Machine Gun Corps in the front line a month later, presumably after a period of training at the Corps’ depot at Camiers near Etaples. Richard probably joined a six-man team trained to operate a Vickers machine gun which was capable of firing nearly 500 rounds per minute. Two men were needed to carry the gun and tripod and two others were detailed to carry ammunition, which was held on canvas belts. A Vickers machine gun team also had two spare men armed with rifles to defend the other operators, who were ‘marked men’ during enemy attacks, hence the Corps’ nickname of ‘The Suicide Club’.

As for so many, Richard’s time on the front line was tragically short. His records show that he was killed in action on the Somme on the 26th September 1916. The unit War Diary shows that the 165th Machine Gun Company were in and out of the Somme front line throughout September and that on 25th their guns were deployed during a successful attack on the village of Guedecourt. The following day the Company was involved in another fruitful attack on Grid Trench, which was captured with the support of a tank (at the time still a novelty, having been first deployed in battle only ten days earlier). Although there is no record of casualties, it seems certain that Richard was killed during these operations. 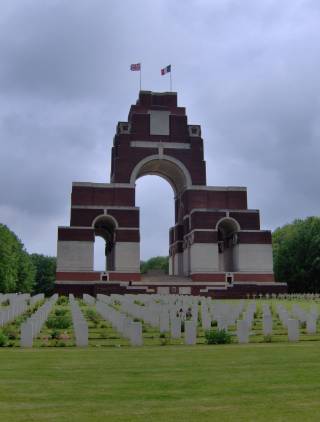 Private Page has no known grave and is commemorated on Pier 12 Face C of the impressive Thiepval Memorial to the Missing of the Somme. His name is alongside  more than 72,000 other men from the United Kingdom and South Africa killed on the Somme front between July 1915 and March 1918 who have no known place of burial.

Construction of the massive memorial, designed by Sir Edwin Lutyens, began in 1928. It was unveiled by the Prince of Wales on 1st August 1932; Lutyens attended the ceremony. At 140ft it is the largest war memorial to Commonwealth war dead in the world, and is understandably one of the most visited sites on the Western Front. In Newick, Richard is commemorated on the school plaque and in the village’s Roll of Honour and Book of Remembrance, as well as at the village green.

Documents held with Richard’s military records show that his widow Maggie was awarded a pension of 28s/6d a week, although separately filed pension records give a figure of 28s/9d. Richard was entitled to the British War Medal and the Victory Medal, both of which were sent to Maggie after the war.

Newick Primary School’s archaeological project has been running once every three years since the rediscovery of the remains of the cottage Richard lived in as a child. It has enabled students aged 4 to 11 to have a go at excavation, map analysis, finds identification and processing and learn about the history of their local area. The project recently won Youth Engagement Project of the Year (2022) at the Council for British Archaeology/Marsh Community Archaeology Awards. 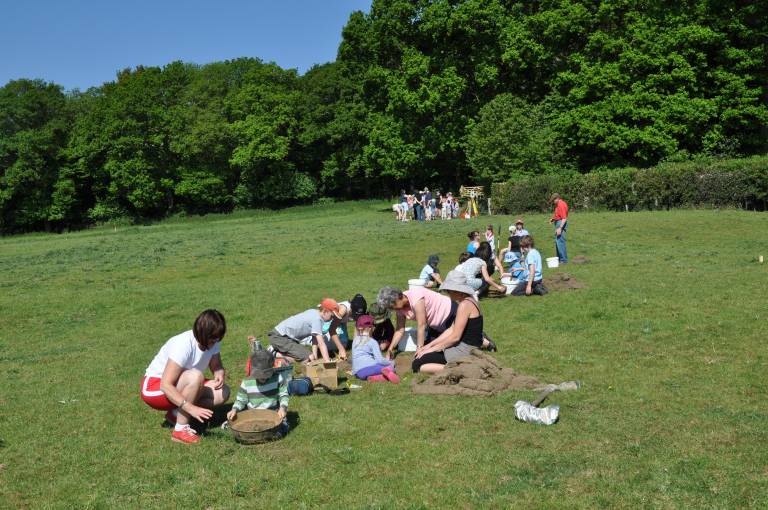 Simon Stevens is a senior archaeologist at ASE. His interest in The Great War stems from the service of his maternal grandfather, Charles Curl, 6th Battalion, East Kent Regiment, wounded twice, taken prisoner, a man who suffered both physically and mentally for the rest of his life.

The research on the lads from the village of Newick came about after seeing the village’s two original war memorials in the church and school and wondering how such a small village had given so much; there are 40 names on the memorials.

Starting with pictures and limited details in a ‘Roll of Honour’ kept by the village headmaster (who lost a son himself) the stories of the men were compiled from various documents held by the National Archives, the Commonwealth War Graves Commission, and a range of other sources including press cuttings. Research led to the discovery of 13 more men with connections to Newick who died as a result of their service.