Dr An Vanderhelst discusses her experience of VoiceThread, a video blogging tool. 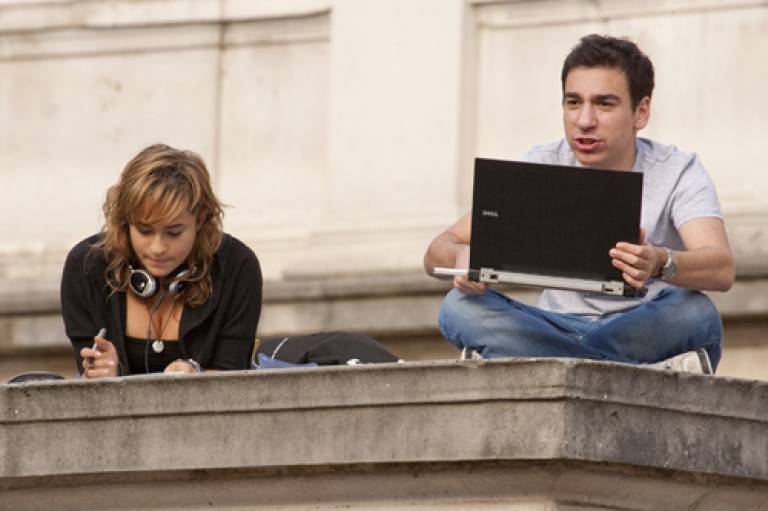 Earlier this year, Dr An Vanderhelst was awarded a Teaching Innovations Grant so that she could trial VoiceThread, a video blogging tool that enables distance-learning students to practise their speaking skills in their own time.

We spoke to her about her experiences using the software on her online course.

"I teach an online Dutch course for intermediate learners, called "Hogelands".  Students and the tutor upload conversational videos to a blog-style tool so that they can practise speaking regardless of time zone.

My courses used to mainly consist of people from Europe, but now my students come from all over the world.

It’s important to practise speaking on a language course but when people are in time zones that are sometimes 12 hours apart, it’s difficult to organise practice sessions that work for everybody. Simply pairing people up with others in their own time zone doesn’t always work, as there might be a large age gap or they could be at very different levels, meaning that they’re both disadvantaged. It’s also not ideal if students are only conversing with me – it’s better if they can exchange experiences with other students and it also makes the course less lonely.

For these reasons, I decided to look for a tool that would allow people to speak asynchronously i.e. not at the same time.

VoiceThread was recommended by a number of people teaching similar courses. It’s a sort of spoken blog, which allows you to upload or link to a pre-existing audio, image or video file (for example a Dutch news bulletin) and then use VoiceThread’s built-in recording tool to create a short video of yourself talking about it. I set research or discussion questions linked to the topic. I might, for example, have picked a video about the Dutch education system and then ask the students to discuss how it compares to the education systems in their own countries. They can then simply click the ‘record’ button and post their response, which is automatically uploaded. VoiceThread is very simple to use and it looks like a lot of other social networking tools so the younger students in particular find it easy to get to grips with.

I usually dedicate a week to each video and students can participate as many times as they want; they just log in, whether it’s morning or evening where they live, listen to what others have contributed and continue the conversation. That’s the great thing about VoiceThread: it provides a platform for students to speak with each other as much as they want – and speaking is often the skill they want to develop most. Some weeks we’ll have 100 recordings over seven days!

Being there to moderate the threads is important – you need to log in and listen to what’s going on at least two or three times a day. I participate and spur things on if necessary, and also have the power to delete inappropriate recordings.

I don’t think VoiceThread would work for beginners as they’re not usually ready to formulate answers to questions, but it’s ideal for people who are intermediate or advanced. We do still use Skype for some exercises, but I like the way that VoiceThread allows us to start from the same picture or video so we’re not just talking in a vacuum. It makes the topics much less dry and means I can visually engage the students more.

It’s difficult being one of the few people at UCL who is running a purely distance learning course – a lot of what I’m doing is trial and error, and tools and technologies change so rapidly that they’ll often have moved on before I’ve had the chance to use them because of having to wait to hear about funding applications!

For example, the Second Life software, which I was using two years ago, is now pretty much obsolete – hardly anyone is using it and money hasn’t been spent on maintaining or updating it so I very rarely use it these days.

I was lucky to discover VoiceThread when I did, as they recently announced that they’re going to start charging people to use it. However, the exercises that I’ve already got online will still be free to use (I can just delete the students’ recordings and reuse my original postings with new groups), which is lucky as it has become a really integral part of the course."

Examples of VoiceThread being used for educational purposes

Staff asked to prepare for migration to new, improved Moodle for 2018-19