Magnetospheres are found across the Universe from Mercury, Earth, the giant planets of our Solar System, to exoplanets, pulsars and even the galaxy. Magnetospheres are regions surround celestial bodies that are dominated by electromagnetic forces. The magnetosphere around Earth has been studied for over 50 years and we have a very detailed understanding of its three-dimensional structure and variability. It is significantly affected by the Sun producing the phenomenon of Space Weather.

Planetary scientists at MSSL study magnetospheres beyond the Earth, from the magnetospheres surrounding Venus and Mars, to those of the giant planets. These magnetospheres are often driven by very different energy sources and have different sources of particles to populate the magnetosphere. Jupiter's magnetosphere is the largest physical structure in the Solar System. It could easily swallow the Sun and if it were visible to the naked eye it would appear twice as big as the Moon in the night sky even though it is 2000 times further away! The image on the right shows an artist's impression of the inner regions of Saturn's magnetosphere.

Our instruments return data about these magnetospheres to answer questions such as:

In the planetary group we are interested in how the natural satellites of planets such as Jupiter and Saturn interact with the magnetosphere of their parent planet. Moons such as Io, Europa and Ganymede at Jupiter, and Enceladus and Titan at Saturn have important interactions with the jovian and saturnian magnetospheres: 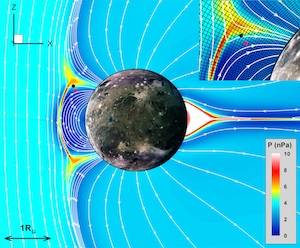 MSSL planetary scientists study these (and other) aspects of moon-magnetosphere interactions. 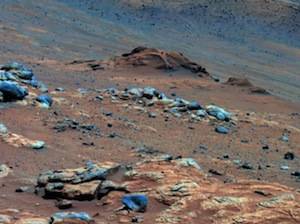 The surfaces of planetary bodies and natural satellites provide vital clues as to the origin and evolution of these bodies and the Solar System. Using imaging instrumentation developed at MSSL and in collaboration with other institutes we have embarked on a new programme of planetary surface and atmosphere studies. Using these instruments we will study martian geology. Not only can imaging allow us to study the geology and mineralogy of the surface but we can also use it to investigate the physics of the martian atmosphere.

Imaging observations can be used to measure the height profile of dust and of water vapour which relates to our studies of the interaction of Mars with the Solar Wind. We have also studied the influence of radiation on the surface and sub-surface layers on Mars.

Comets are important to study as they are ancient objects, almost unchanged since the beginning of the solar system 4.6 billion years ago. They are often called the building blocks of the outer solar system, and are the nearest surviving objects to the early "planetesimals".  Comets are thought to be stored in two "reservoirs": the Oort cloud and the Kuiper belt. Every so often comets are nudged inwards in their orbits, passing through the inner solar system and in some cases being trapped in a lower solar orbit by Jupiter. Some comets, likely to be from the Oort cloud, have orbits with "long" periods (eg Halley 76 years, Hale Bopp thousands of years) and others such as Wirtanen (Rosetta's original target) and Grigg-Skjellerup have interacted significantly with Jupiter and have "short" periods near 5 years.

Comets are also important due to their role early in the solar system of bombarding the Earth's and other atmospheres with volatile substances like water and carbon based compounds. There is evidence that at the end of the solar system's early bombardment phase, 4.6 to 3.8 billion years ago, the compositition of Earth's atmosphere bore some similarities to the composition of comets. Comets therefore may have played an important role in bringing water and other volatiles to Earth and other inner solar system objects, in addition to outgassing of volatile material from the forming planets. They are also important because of collisions which can still happen, as seen with comet Shoemaker-Levy 9 hitting Jupiter in 1994.

In connection with our programme of research into planetary magnetospheres we are interested in how these planetary magnetospheres are affected by Space Weather. In the context of the terrestrial magnetosphere this activity is almost completely controlled by the Sun and the extension of its atmosphere to form the Solar Wind. At the giant planets activity in their magnetospheres can also be produced by dynamic activity in their magnetospheres. For example, we know that Jupiter's magnetosphere can respond to sporadic and dramatic volcanic eruptions on its moon Io. In the planetary group we are interested in understanding these Space Weather effects at Venus, Mars, Earth, Jupiter, Saturn and other bodies in the Solar System. One of the ways we can do this is to use images of the aurorae (see image on the right) which is often described as a "TV screen" for Space Weather. In recent work we have studied how evidence of strong Space Weather activity from auroral images of Saturn is confirmed by measurements from our CAPS/ELS instrument in the magnetosphere  of Saturn.

MSSL is one of only a few UK academic departments that design, build, operate scientific instruments on spacecraft and also do scientific analyses on the data that comes back. As we push out further into the Solar System and try to study more challenging targets it is imperative that we develop new scientific instruments and continue to reduce the mass/power consumption of our existing designs. Our instrumentation research programme is continuing to design and develop instrumentation for a range of Solar System missions.