Tailcatcher is a service that searches for crossings of comets' ion tails by spacecraft.

When provided with a spacecraft ephemeris as a list of timed positions, the Tailcatcher code will search a database of all known comets for periods when tail crossings may have been possible, if solar wind speeds allow.

Why are Comet Tail Crossings Interesting?

All dedicated comet spacecraft missions have been targetted at comets' heads, with the exception of the 1985 encounter by the International Cometary Explorer (ICE) with Comet 21P/Giacobini-Zinner.

From comet tail crossings, we can learn what happens to cometary material after it has left the region of the comet's nucleus. Comets' ion tails have magnetic field structures that we can also learn about from studying data from magnetometers gathered during tail crossings. Some instruments can directly measure the composition of ions carried in the solar wind, so can provide information on the make-up of the comet from tail material sampled far downstream.

What's needed for a Tail Crossing to Take Place? 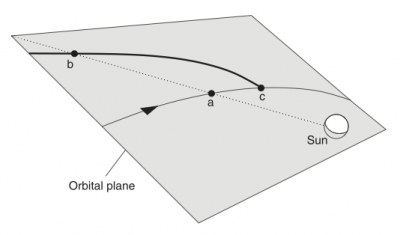 For a tail crossing by a spacecraft at position (b) to be possible, several conditions have to be met:

The need for all these conditions to be met means that tail crossings are rare. However, they do sometimes occur. The aim of Tailcatcher is to find all possible known ones, and to predict when future tail crossing events will take place. If crossings can be predicted, instruments on spacecraft can be on and in modes that will return the most valuable data from the encounters.

To demonstrate its output, an example Excel format file listing possible encounters with comets by the Ulysses spacecraft during its 1990-2009 mission is available

To demonstrate its output, an example Excel format file listing possible encounters with comets by the Ulysses spacecraft during its 1990-2009 mission is available

The service may be used informally by sending a request to the following email address: Dr Geraint Jones (g.h.jones ucl.ac.uk)