What is Planetary Science?

Planetary science is the scientific study of planets and their planetary systems which includes moons, ring systems, gas clouds, and magnetospheres.

Planetary science is the scientific study of planets and their planetary systems which includes moons, ring systems, gas clouds, and magnetospheres. It involves understanding how planetary systems formed, how these systems work and how all their components interact. It is a cross-discipline field including aspects of astronomy, atmospheric science, geology, space physics, biology and chemistry.

What are the big scientific questions that Planetary Science tries to answer?

How are these questions answered?

Planetary scientists use lots of different techniques involving lots of branches of science to try to answer these questions:

Example: The discovery of large organic molecules in Titan’s atmosphere 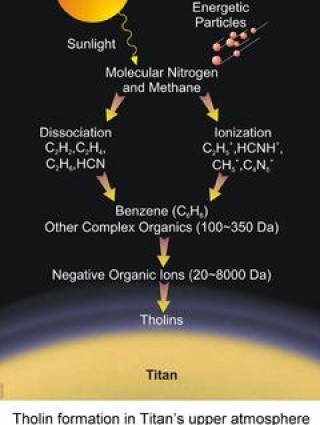 Titan is Saturn's largest moon and the second largest moon in the Solar System. MSSL Planetary scientists used measurements made by the Cassini spacecraft, as it flew through Titan's upper atmosphere, to discover very large electrically charged organic molecules in Titan's atmosphere. By measuring their mass and considering the chemistry involve to create them we found out that they could be created by complex chemistry in the atmosphere. The energy to drive this process comes from sunlight and from particles in Saturn's magnetosphere raining down on the atmosphere. These particles slowly rain down onto Titan's surface, becoming neutral as they do so, and become a type of heavy molecule known as a Tholin. We think these are important for the origins of life and may have been important early in the history of the Earth. So in a sense Titan is like a window into the past history of the Earth.

Why are these questions important?

Where did the Solar System come from? Where did life come from? These sorts of questions are some of the most profound we can ask. It is also important to study many planetary systems as that tells us more about our own planet Earth and helps us understand effects such as space weather and climate change.