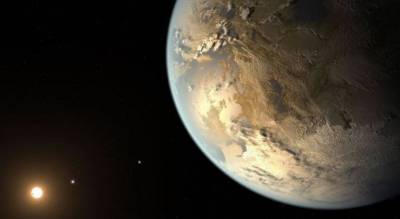 Observations of transiting exoplanets rely on disentangling variations in the depth of the transit as a function of wavelength from instrumental effects, and from potential confounding astrophysical signals. Because the signals of interest are small (~ 1:10,000), sophisticated data reduction techniques are required. The UCL Exoplanets group specialises in developing new and innovative methods for reducing exoplanet spectra, from the Hubble Space Telescope, Spitzer and ground-based observatories.

As more and more exoplanets continue to be discovered, scientists are becoming increasingly interested in characterisation of these worlds.  UCL CPS researchers are very active in this exciting field, with particular emphasis on the use of transit spectroscopy. When a planet passes in front of its parent star it causes the starlight to appear dimmer for a short period of time. The magnitude of this dip in light allows us to infer the radius of the planet. By repeating this measurement at different wavelengths of light, apparent changes in the radius of the planet can be seen, due to the planet’s atmosphere absorbing or scattering particular wavelengths to varying degrees.

We use radiative transfer and spectral retrieval techniques to infer atmospheric properties from transit spectra. Simple, parameterized atmospheric models are coupled with a retrieval algorithm (e.g. optimal estimation, nested sampling) or used in conjunction with a neural network. These models are applied to transit, eclipse or phase curve spectra from observatories such as the Hubble Space Telescope, and the retrieval algorithm is used to calculate a posterior probability distribution for each of the parameters in the model. Using this technique, it is possible to recover information about temperature structure, cloud properties, and relative abundances of gases within the atmosphere, which helps us to understand the physical processes governing the evolution of the atmosphere.

To this end, UCL is currently leading a new space mission, ARIEL - the Atmospheric Remote-sensing Exoplanet Large-survey. ARIEL was selected in 2018 by the European Space Agency (ESA) for its next medium-class science mission due for launch in 2028. The goal of the mission is to investigate the atmospheres of several hundreds of planets orbiting distant stars in order to address the fundamental questions on how planetary systems form and evolve.

In addition, Blue Skies Space Ltd, a UCL start-up, is working with European space industry to enable cost-effective, quickly-delivered scientific instruments for users worldwide through a service-based model. BSSL's first satellite, the Twinkle Space Mission, will carry unique instrumentation designed to analyse the atmospheres of planets orbiting distant stars, as well as objects in our own Solar System.

The fields of planetary sciences and exoplanets have firmly entered the era of ‘big data’. Current and future space missions provide an unprecedented wealth of information. Analysing currently available observations of often invoke large and correlated parameter spaces that can be difficult to map or constrain. This is true for both: the data analysis of observations as well as the theoretical modelling. Issues of low signal-to-noise data and large, non-linear parameter spaces are nothing new and commonly found in many fields of engineering and the physical sciences. Recent years have seen vast improvements in statistical data analysis and machine learning that have revolutionised fields as diverse as telecommunication, pattern recognition, medical physics and cosmology. In many aspects, data mining and non-linearity challenges encountered in other data intensive fields are directly transferable to the field of planetary sciences. UCL is at the forefront of this effort with both, the Centre of Space and Exoplanet Data and the European Research Council funded ExoAI group. Together, working with leading statisticians, we develop novel machine learning solutions to these the contemporary data problems.

When spectra of exoplanets are retrieved, we must compare the observations to that of models in order to understand what we are seeing.  To do this, we use the Quantemol programme suites (developed here at UCL) to generate the spectra expected from various molecules at different temperatures.

The generation of these molecular line lists is led by Prof. Jonathan Tennyson of the Atomic, Molecular, Optical and Positron Physics (AMOPP) Group.  Comprehensive line lists for a range of molecules, including H2O, CH4, NH3, and HCN, have been used in recent studies and support the accurate retrieval of molecular abundances from spectra.

It is now well established that rocky planetary systems are present and active around a large fraction of white dwarf stars.  They manifest as transits, debris disks, and importantly this planetary material pollutes the otherwise pristine surface of the stars.  The pattern of heavy elements in the white dwarf thus provides a measurement of the bulk chemistry of the underlying minor or major planets in orbit.  No other technique either current or planned can provide this level of insight into planetary compositions.

At UCL we are using space-based observations with Hubble and Spitzer, as well as ground based observations from the VLT and Keck to characterize these evolved planetary systems, and constrain both the assembly and chemistry of extrasolar planetary material.  To date, the bulk of measurements points to rocky and Earth-like compositions and even evidence of water.  Monitoring of these systems in the optical and infrared has revealed many are changing over months to years, both in terms of transiting behavior and the evolution of their debris disks. The UCL group is working on all of these aspects using observation.