One of the most basic questions that scientists can ask about rocky and potentially Earth-like exoplanets is “What is their chemical composition?”

Small, solid exoplanet detection has become a scientific reality with state of the art facilities such as the Kepler mission, yet the empirical characterisation of these most intriguing planets is extremely challenging. Transit plus radial velocity information can yield planet mass and radius, and hence planet density, but the bulk composition remains degenerate and model−dependent.

Fortunately, as demonstrated by the Spitzer Space Telescope and complementary ground−based observations, debris−polluted white dwarfs can yield accurate information on the chemical structure of rocky minor planets (i.e. extrasolar asteroids); these are the building blocks of terrestrial exoplanets. The white dwarf distills the planetary fragments, and provides powerful insight into the mass and chemical structure of the parent body.

Heavy elements sink rapidly from the outer layers of cool white dwarfs due to their high surface gravities, resulting in pure hydrogen (or helium) atmospheres. However, those stars with planetary system remnants can become contaminated by small, but spectroscopically detectable, amounts of metal-rich material as have been observed (but not understood) for decades. In recent years, infrared observations have firmly linked these atmospheric metals to tidally destroyed planetary bodies analogous to the asteroids of the Solar System. At least one such system exhibits deep and irregular transiting events, strongly confirming the presence of a planetary system.

Image (from left to right):  1. Tidally disrupted, rocky minor planets at white dwarfs. 2. The orbit of a large asteroid is highly perturbed (by a planet, analogous to the Kirkwood gaps in the Main Belt created by Jupiter) so that it passes within the Roche limit of the star, where it is destroyed by tidal forces. 3. The material forms a disk that gradually rains down heavy elements onto the surface of the white dwarf, where its elemental composition can be observed. 4. The disks may be geometrically and physically similar to the rings of Saturn. 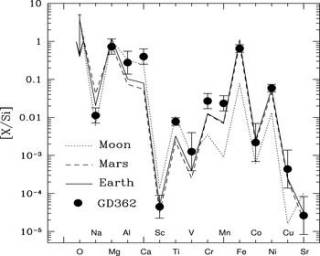 This archaeological method provides empirical data on the assembly and chemistry of terrestrial exoplanets that is unavailable for any planetary system orbiting a main sequence star. In the Solar System, the asteroids (or minor planets) are leftover building blocks of the terrestrial planets, and we obtain their compositions, and hence that of the terrestrial planets, by studying meteorites. Similarly, one can infer the composition of terrestrial exoplanets by studying tidally destroyed and accreted asteroids at polluted white dwarfs.

Image: The abundance of many metals detected in asteroid-polluted white dwarf GD 362. The relative pattern of heavy elements is best matched by a combination of the Earth and Moon, demonstrating the debris is refractory-rich, volatile-poor, and terrestrial in nature. 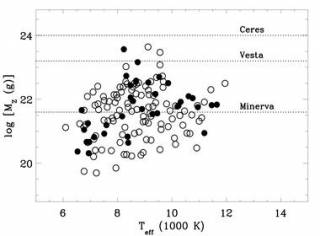 Image: The minimum mass of planetary debris accreted by numerous polluted white dwarfs from the Sloan Digital Sky Survey. On average, these stars have consumed at least a 150 km diameter asteroid (e.g. Minerva), but several contain metal masses similar to the two largest asteroids in the Solar System, 4 Vesta and 1 Ceres. These latter two minor planets are sufficiently large as to be differentiated (i.e. with cores, mantles, and crust) and are considered to be planetary embryos.

UCL is one of the few places in the world where this research is being led, and there are currently opportunities to study exo-terrestrial planetary system composition, frequency and architecture.