As more and more exoplanets continue to be discovered, scientists are becoming increasingly interested in characterisation of these worlds.

Researchers in the UCL Exoplanets group are very active in this exciting field, with particular emphasis on the use of transit spectroscopy. When a planet passes in front of its parent star it causes the starlight to appear dimmer for a short period of time. The magnitude of this dip in light allows us to infer the radius of the planet. By repeating this measurement at different wavelengths of light, apparent changes in the radius of the planet can be seen, due to the planet’s atmosphere absorbing or scattering particular wavelengths to varying degrees.

We use atmospheric radiative transfer models and so called “spectral retrieval” techniques to infer atmospheric properties from transit spectra. Simple, parameterized atmospheric models are coupled with a retrieval algorithm which try to solve the inverse problem of inferring the atmospheric parameters (such as abundances of atmospheric gasses, cloud layers and the atmosphere’s temperature structure) from the data. Multiple retrieval approaches exist and we use a combination of Bayesian techniques (e.g. optimal estimation, nested sampling) and deep neural networks. These models are applied to transit, eclipse or phase curve spectra from observatories such as the Hubble Space Telescope and ground-based telescopes such as the VLTs in Chile. Using these techniques, it is possible to recover information about atmosphere, which helps us to understand the physical processes governing the evolution of the extrasolar planet.

Multiple spectral retrieval codes are available. Within the group, we use TauREX, which is an open-source code developed at UCL specificially for extrasolar planets, and NEMESIS, which was originally developed at the University of Oxford for application to spectra of Saturn obtained by the Cassini spacecraft. Whilst different retrieval codes have strengths particularly suited to specific scenarios, benchmarking tools to ensure consistency is extremely important, and this has recently been a focus of ours. 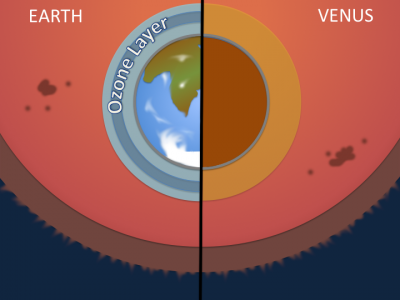 Much of our current work is devoted to model development for upcoming space missions. As well as the UCL-led ARIEL mission, which will be dedicated to obtaining transit and eclipse spectra of exoplanet atmospheres, the group is also involved in planning early observations for the James Webb Space Telescope (JWST), which is due to be launched in 2021 (Waldmann JWST-MIRI consortium, and Barstow NIRSpec Exoplanets GTO consortium). JWST is expected to provide exquisitely precise and detailed spectra of hot Jupiters, and also has the potential to characterise more Earth-like worlds such as those in the TRAPPIST-1 system. The group’s research goals for JWST include an improved understanding of the behaviour of clouds on hot Jupiters; understanding the chemistry and climate of these planets; the detection of ozone in the atmosphere of a terrestrial planet; and to put our own solar system in the grander context of our galactic neighbourhood.

Image: Detecting absorption from ozone in the atmosphere of a terrestrial exoplanet could allow us to discriminate atmospheres that are Earthlike from those that more closely resemble Venus. Credit: Dr Jo Barstow.