We view space science and engineering as part of our wider culture and have collaborated with many artists over the years to co-create art-science activities.

Activities such as these open new conversations between people who work at MSSL and audiences from diverse backgrounds, and they motivate us to view and use our surroundings in new ways.

Giving over our grounds to students from the Slade School of Art led to the creation of a variety of space-inspired sculptures and an opportunity to discuss space science and engineering from a different perspective. Our story-telling event with artist Joanna Griffin, produced by the Arts Catalyst and funded by UCL Beacons for Public Engagement, took people on a sunset walk through the grounds stopping at selected locations to exchange stories, experiences and views on space and space exploration. Joanna developed this event after spending several months visiting MSSL and its surrounding community gathering knowledge and building an understanding of how space can be made tangible and how our science and engineering teams form part of the fabric of the local community. 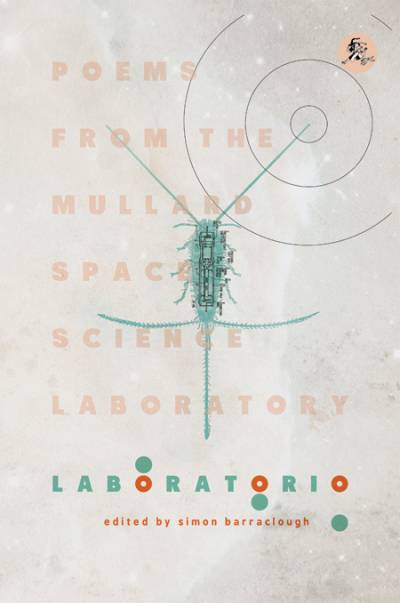 Our collaboration with award-winning poet Simon Barraclough led to Simon taking up a residency at MSSL, fully embedding himself in the day-to-day activities of the laboratory and providing new avenues for creativity. The residency was funded by STFC and culminated in the publication of a poetic anthology of MSSL, called Laboratorio, (published by Sidekick Books) as well as a series of events for public audiences. You can listen to an interview with Simon about the residency in the podcast here.

Lisa Pettibone’s year-long residency at MSSL focussed on the Euclid Mission, a European Space Agency spacecraft to explore the dark universe through observing structures formed by luminous galaxies. This residency was funded by the Arts Council England and Lisa led creative workshops and held interviews with staff in the department. The project culminated in the development of an artwork that will be placed on the Euclid spacecraft ready for its launch in 2022, an exhibition at the Lumen Gallery in London and a symposium that explored the benefits of art/science collaborations.

The European Solar Orbiter mission that is studying the Sun, and in which MSSL is playing a major role, inspired the creation of an artwork by Melanie King that was commissioned as part of the ITV Creates programme and showcased on ITV over 500 times, reaching an audience of millions. Melanie’s work revolves around astronomy, analogue photography and materiality and she is a PhD Candidate at the Royal College of Art.

Leading and being part of exhibitions enables our scientists and engineers to directly engage with thousands of member of the general public, school students and teachers, and family audiences. We frequently exhibit at the Royal Society’s Summer Exhibition having had exhibits on the Sun, the aurora, Mars, comets, icy bodies in the depth of the Solar System, and the Gaia mission. We also played a founding role in the creation of the Science Museum’s Sun exhibition ‘Living with our Star’ that is now touring internationally after a 7-month stint in London. This exhibition was the museum’s first blockbuster on the science of the Sun and its contribution to our culture, and it showcased both artefacts that are 3000 years old and the latest space-based instrumentation. MSSL has loaned a model of the Solar Wind Analyser, a replica of the one carried onboard the Solar Orbiter spacecraft, for display in this exhibition.​​​​

Many of our staff and students regularly write reflective and informative articles about space science and space science exploration. Our articles have appeared in print media such as the BBC’s Sky at Night Magazine, Astronomy Now and Wired, as well as appearing as online articles in, for example, The Conversation. You can read articles in The Conversation by Prof. Andrew Coates, Prof. Lucie Green and Prof. Geraint Jones.

We are always very happy to consider requests for talks. For all outreach queries please email:
Email: mssl.outreach@ucl.ac.uk