The Invisible Disabilities Sunflower lanyard scheme is an initiative designed to act as a discreet sign that somebody has an invisible disability and requires additional assistance while out in public.

The scheme has been introduced at UCL following requests from disabled staff and students. Please note that wearing of the sunflower lanyard is optional.

History of the scheme 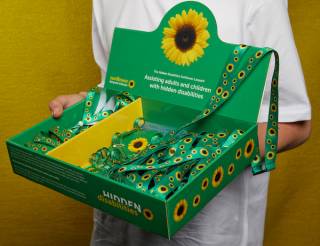 The scheme was first launched in 2016 at Gatwick Airport by designers, Tabbers Limited, alongside the OCS Group UK, who provide support services to UK airports. More than 10,000 lanyards have been collected.

Today the lanyard is recognised at international airports, cinemas, shopping centres and several NHS Trusts as more UK airports, supermarkets, railway stations and sports venues distribute the lanyard. Sainsbury’s has been the first supermarket to trial the scheme with 40 stores. Tesco is also trialling the scheme in 15 Hertfordshire stores.

Which invisible disabilities eligible for a sunflower lanyard?

Where can I collect a sunflower lanyard?

If you require a lanyard before attending UCL, please ask your department representative to collect a lanyard on your behalf and post it out to you. Alternatively they may be obtained from the sunflower lanyard shop.

Students may request a Lanyard via ‘askUCL’.

How can I get a sunflower lanyard ahead of coming to campus?

We recognise that some individuals will want to have a lanyard ahead of arriving on campus, therefore students can request a lanyard to be posted to them via ‘askUCL’.
Student Support and Wellbeing will then post a lanyard out to you.

I already have a sunflower lanyard; can I use that?

Why ‘invisible disabilities’ not hidden?

Whilst the national scheme calls itself the ‘hidden disabilities sunflower lanyard scheme, UCL is using the term invisible disabilities. We are proud of the diverse make-up of our university and would not want anyone to feel they should hide who they are.

Sunflower for your email footer

Show your support and download and one one of these two sunflower badges and add them to your email footer.