Pinney's research has a strong geographic focus in central India: initial ethnographic research was concerned with village-resident factory workers. Subsequently he researched popular photographic practices and the consumption of Hindu chromolithographs in the same area. His publications combine contemporary ethnography with the historical archaeology of particular media (see eg. Camera Indica and Photos of the Gods). The Coming of Photography in India, based on the Panizzi Lectures was published by the British Library in October 2008. Other recent work includes Photography and Anthropology (Reaktion 2011) and (together with Suresh Punjabi) Artisan Camera: Studio Photography from Central India (Tara, 2013).

He is currently (2016-2020) leading the ERC-funded project "Citizens of the Camera: Photography and the Political Imagination" 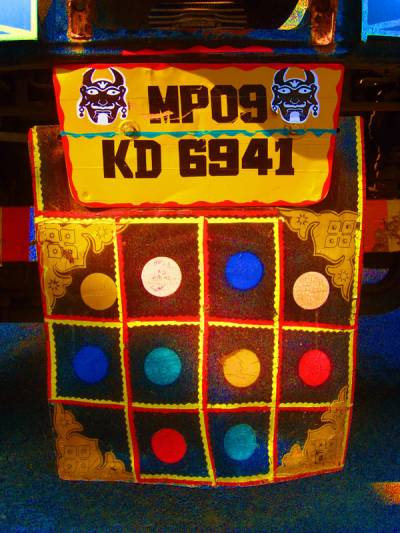 He is currently interested in cultural spaces which conventional social theory has tended to neglect: "more than local and less than global", and spaces of cultural flow that elude the west. In addition to ongoing projects with an Indian focus (for instance, a filmic record of two central Indian Dalit intellectuals) he is also working on visual dimensions of cultural encounters from 1492 to the present, and thinking through Kracauer's later work and the question of 'multiple temporalities'. 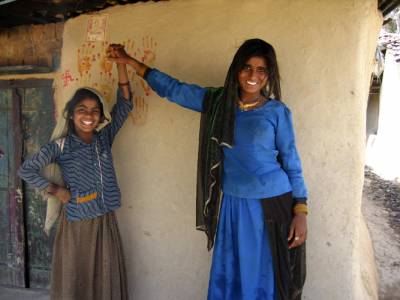 In 2009-10 Pinney visited India for research on several occasions in connection with a British Academy funded project "Power From Below: Dalit Modes of Political Performativity" which is examining the visual ethics and politics of Dalit goddess possession. He also participated in the Kovalam Literary Festival in Kerala, conferences on Gandhi's Hind Swaraj in Mumbai and on the New Cultural History in Kolkata, and gave public lectures at the University of Hyderabad, English and Foreign Languages University (Hyderbad) and at the arts organization 1 Shanthiroad (Bangalore).

Pinney's current photographic xeno-epistemic digital-cyanotype project Notes on Indian History is an attempt to document India's colonial and postcolonial predicaments. The image below, taken at the Union Carbide plant in Bhopal in April 2010 is part of the Bhopal:Blueprint/Endplan series. The Madhya Pradesh Government official number of fatalites was 3,787. Other Indian Government agencies have since calculated the total at more than 15,000. Perhaps between 100,000 and 200,000 people still live with gas-related disabilities. The rickshaw driver who drove me to the plant (in a densely populated area, just north of the railway station) was eight on that night - 2nd/3rd December 1984 when 28 tonnes of lethal gas rolled across the centre of Bhopal. He recalled waking with excruciating pain in his eyes and being rushed to a chaotic hospital by relatives. Countless family members still live with the effects of that night.

Tank 610 - containing 42 tons of methyl isocyanate (MIC) - was rapidly filled by water late on December 2nd, causing the temperature of the tank to rise to more than 200°C.

Union Carbide downplayed the incidents of phosgene leaks (some involving fatalies) in 1981, 1982 and multiple MIC leaks in 1982, 1983 and early 1984. Indian authorities warned of the probability of a major incident from 1979 onwards. Visiting US experts in 1981 warned Union Carbide of the potential for a 'runaway reaction' in the MIC plant.

The MIC tank alarms had not worked for four years and there was only one manual back-up system as opposed to the four relied on in US plants. The flare tower and gas scrubber had been inoperable for five months prior to the disaster but in any event the scrubber was designed to handle only one quarter of the pressure which had built up in the tank and the tower one quarter of the volume of gas. Carbon steel valves, which corrode when in contact with acid were used to save money. Water sprays were set too low and could not reach the gas.

The US parent company (Union Carbide) argued that this was a Badiouan 'event' or 'rupture', without precedent, not easily anticipated and certainly not planned. But perhaps it had more the quality of an 'endplan', - a destiny born of contempt for the poor, distant, and unknown - an outcome written in the blueprints, recoverable after the event through these digital cyanotypes made in 2010.

3. Endplan: Evidence recoverable after the event and which reveals the event to be immanent in the blueprint. 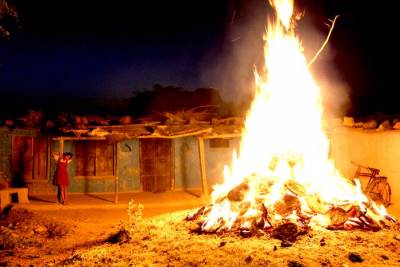 Pinney made two research trips to India in 2008. In January he visited Mumbai, Madhya Pradesh, Delhi and Kolkata. In September he visited Delhi (where he lectured at Jamia Millia Islamia University, the Indira Gandhi National Centre for the Arts, and Jawaharlal Nehru University), Madhya Pradesh, Mumbai and Bangalore (where he gave a Tenth Anniversary Lecture at the Centre for the Study of Culture and Society). In 2009 he made three visits to India to research in Madhya Pradesh (Aug-Sept), and to contribute to the Kovalam Literary festival(Oct) and a Pukar conference on Gandhi's Hind Swaraj (Dec). He also gave lectures and conference presentations at Lisbon, Open University,Cologne,Toronto, Copenhagen, Minnesota and Northwestern. 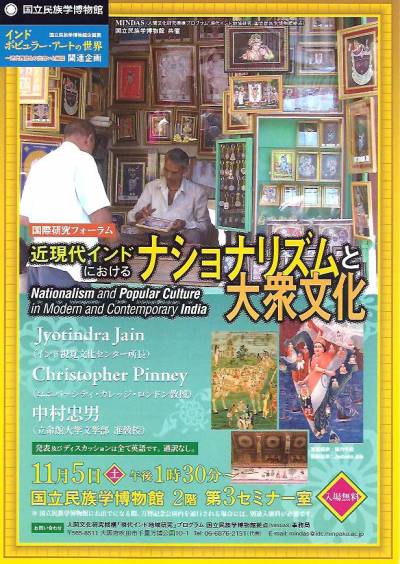 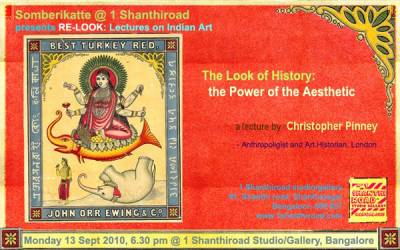 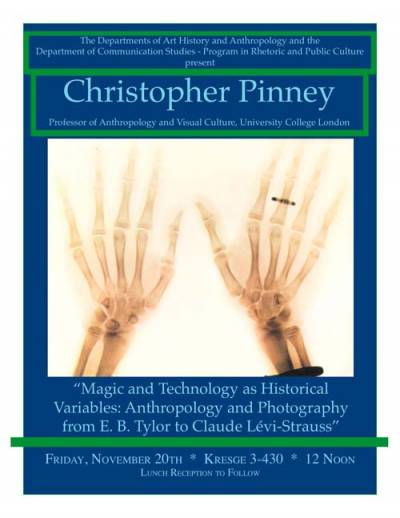 Time Out Mumbai and Time Out Bengaluru interviews are available here and here. 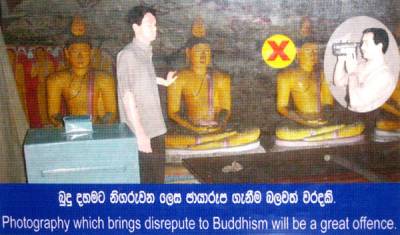 9th October 2015, " I Love the Smell of Napalm in the Morning" Keynote Lecture at HISTART Istanbul

3rd October 2015 public lecture "Is There an Indian Way of Photography?" at Gardner Center for Asian Art, and Ideas Seattle Art Museum

23rd June 2015 "Concluding Comments" in "From Home Movies to Homs: The Past and Present of Amateur Media" (UCL/Birkbeck collaborative project at Birkbeck Cinema)

June 4-5, 2015 Presented paper and acted as discussant in workshop "Political Cosmologies: Global and Contextual Categories in the Study of India" at Max Planck Institute, Gottingen.

8th May 2015 "Copying and De-Synchronizing" in Mobility and Method: Visual Cultures of Ethnography and Travel in series "South Asian Photographs Across the Disciplines", Yale University.

6th May 2015 "I Love the Smell of Napalm in the Morning" keynote at UCL student conference "Aesthetics and Ethics: An Inquiry into their Relationship"

12 February 2015 "On Envelopes, Margins and Medium-Format: the Material History of an Indian Photographic Studio" [Archives and Forms of Knowledge series organized by TORCH & Ertegun House], University of Oxford

28th October 2014 "Ganga and the Cellphone: On the Civil Contract of Photography in India" Department of Art History, Cornell University

25th October 2014 "For an Ethnosociology of Sculpture and Photography" in "Photography and Sculpture: The Art Object in Reproduction" at the Getty Research Institute, Los Angeles

21st June 2014 Plenary Lecture "Disentangled Photographs: How to Do the Ethnography of World-System Photography" at the Photographic History Research Centre, De Montford University

12th June 2014 "Ganga and the Cellphone: The Rise of Wondrous Realism" ; and a discussion with the creators of the Travelling Cinema Project, Amit Madheshiya and Shirley Abraham in Moving On: South Asian Screen Cultures in a Broader Frame, University of Westminster Centre for Indian Media

10th June "The Pictorial Turn at the Border", keynote at Visuality and Territoriality in South Asia The Oxford Research Centre for the Humanities, University of Oxford. 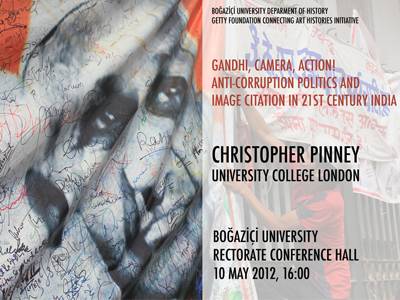 12th, 13th, 14th September 2011, lectures series on "The Indian Work of Art in the Age of Mechanical Reproduction" at Jnanapravaha, Mumbai 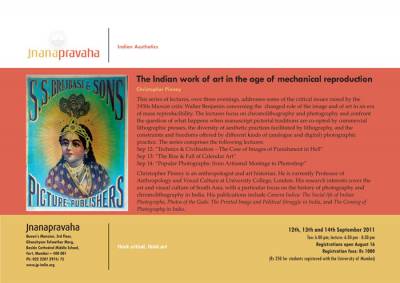 Oct 8th 2010 "">Magic and Technology as Historical Variables: Anthropology and Photography from E. B. Tylor to Claude Levi-Strauss", Department of Anthropology, LSE 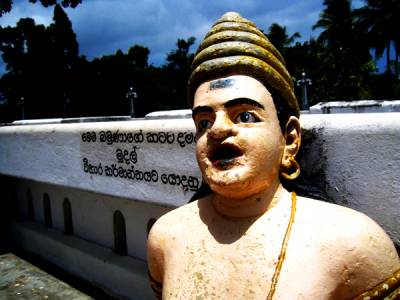 May 26 2009 "The Colonial Dromosphere: Speed, Transmission and Prosthesis in Colonial India", plenary lecture at University of Lisbon Centre for English Studies:

12 June 2009 "Manifestation and Media: The Aesthetics of Plenitude in central India" in conference on "Trance Mediums and New Media", University of Cologne, Institute for African Studies

November 12th-13th, "Zoom: the anxiety of photography in India", in "Private Eyes" conference, University of Copenhagen

18-20th December, "Bombs, Knowledge and Amulets: Hind Swaraj and the Shadow of Tilak's 1908 Trial", Pukar and Jnanapravaha, Mumbai "Hind Swaraj a Century After" conference. Interview in Time Out Mumbai here. 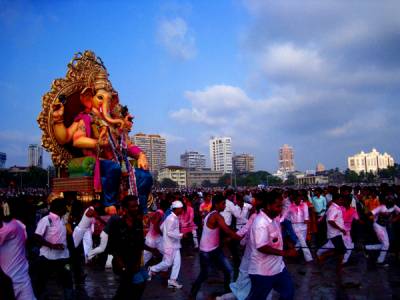 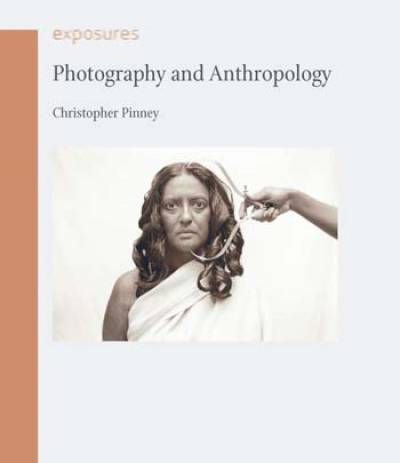 "Epistemo-Patrimony: Speaking and Owning in the Indian Diaspora" in special issue of Journal of the Royal Anthropological Institute co-edited with Nayanika Mookherjee Aesthetics of Nations: Anthropological and Historical Approaches 2011, S192-206.

"Must we be forever condemned to study territories rather than networks?" Trans Asia Photography Review 2010 online. 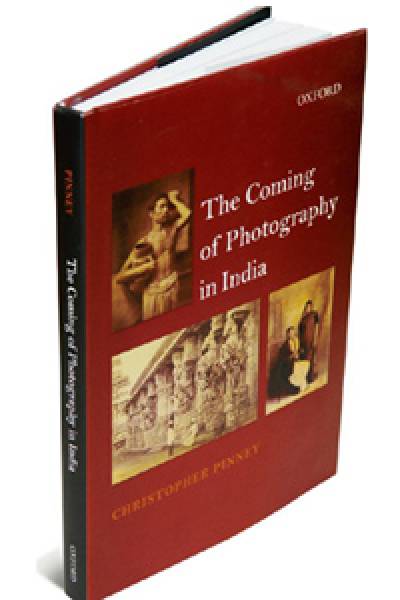 "The Prosthetic Eye: Photography as Cure and Poison" in Matthew Engelke ed. The Objects of Evidence: Anthropological Approaches to the Production of Knowledge special issue of Journal of the Royal Anthropological Institute, 14(s1), pp. s-33-46.

He is keen to work with doctoral candidates on a range of issues including South Asia, visual culture, and postcolonialism.

Konstantinos Kalantzis
Visualizing Identity on the Margins of Europe: Photography and the Geographies of Imagination in contemporary Sphakia, Crete 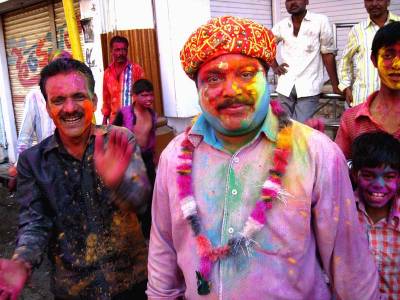 Hoi-Yan Yau
Search for Individual Agency: the Use of Japanese Adult Videos in Taiwan

Shaila Bhatti
Exhibiting and Viewing Culture, Curiosities and the Nation at the Lahore Museum

Chris Wright
Photography and Memory in the Solomon Islands 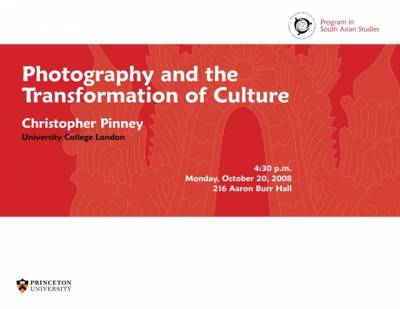 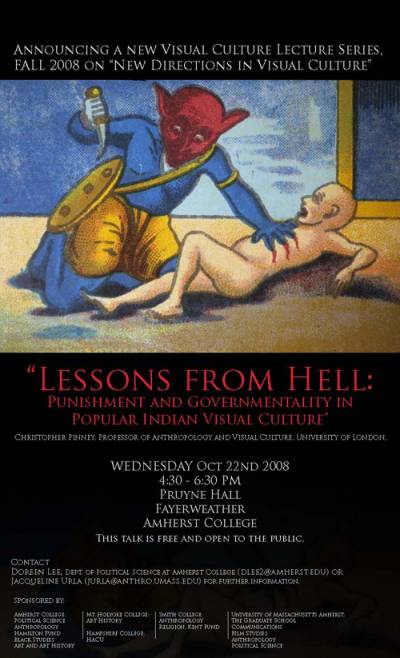 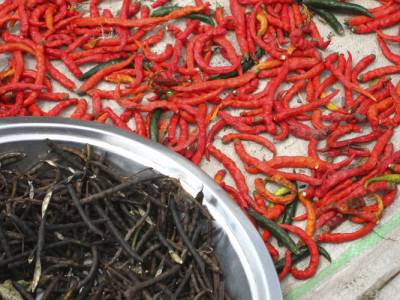 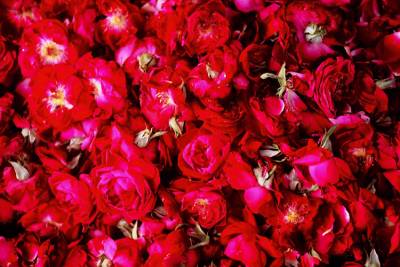