Mohammad El-Gendi is an undergraduate student in the Faculty of Laws and, as an ASER Facilitator, assisted the UCL Department of Philosophy after it received unsatisfactory feedback from students. 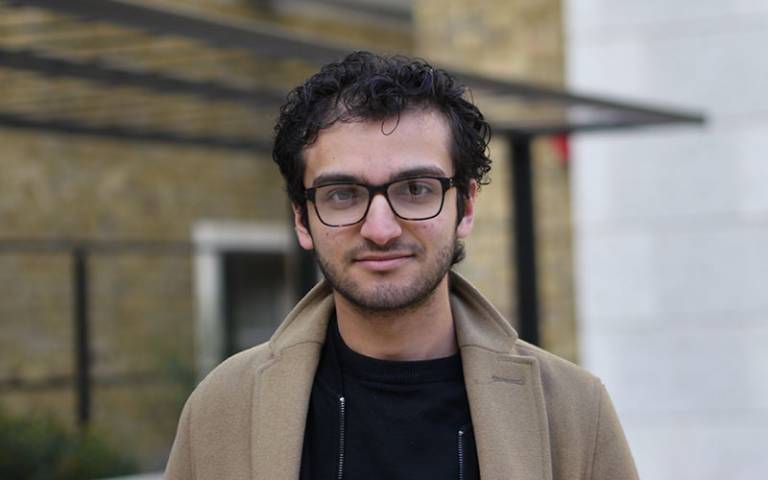 When UCL's Department of Philosophy wanted to explore the reasons behind low scores in the National Student Survey (NSS), they called on students for assistance.

With the help of an ASER Facilitator, Law student Mohammad El-Gendi, they worked with their students to identify, discuss, and find solutions for many of the issues in the department, particularly around assessment and feedback.

With Mohammad’s support, and with staff and students working together in partnership, their NSS scores improved last year, with overall satisfaction improving to 89% (from 70% the previous year) and 'Assessment and Feedback' score improving significantly to 77% (from 44% the previous year). The department were one of UCL's main success stories from the NSS results in 2017.

We spoke to Mohammad to find out how he became an ASER Facilitator and how he helped the UCL Department of Philosophy.

“I’ve always been very keen to make a difference. As a student, I felt the best way I could serve this personal obligation was through getting involved in representation at UCL and other mechanisms for ensuring students’ voices are heard.

Between 2015 and 2017, for instance, I was elected as the Faculty Student Academic Representative for Laws, as well as a member of the Academic Board (chaired by the President and Provost of UCL) and a Union Council member.

Why did you get involved in ASER and how did you hear about it?

The roles mentioned above were very enriching and allowed me to work directly with my Department to bring much needed policy changes. However, I also felt I could have a more direct impact outside my own Department.

This is why, when the opportunity to act as a Facilitator came along, I was instantly sold and applied. I have been doing this role for two years now - first with the Philosophy Department (covered in this interview) and currently with the Physics and Astronomy Department.

What did you do to facilitate change in the UCL Department of Philosophy?

I initially set up an informal chat with the respective staff to introduce myself. It was an opportunity to set out a plan for the process and understand the issues highlighted by the department from the NSS results they received.

We agreed the best way to understand the students’ perspective was to sit down and talk with them. This led to me organising (with support from the Representatives) a focus group open to students within the department to come and voice their opinions. We had a very good turnout of students who were keen and passionate to share their experiences and recommendations on how the department can change its policies.

This was really an opportunity to ask questions and have an open dialogue. Having had the initial meeting with staff, and understanding the issues, I could ask focused questions and get detailed answers. The subject matter of the focus group was not restricted and covered several things, but the following topics were the main issues discussed:

The focus group allowed me also to have discussions with students by offering counter-solutions or arguments to their points. For instance, if a student was not happy with a certain aspect of teaching, I would often provide counterarguments that the staff might express. By doing this, the discussions were more back and forth rather than unilateral and one-dimensional.

After being able to understand the perspectives of both the department and the students, I needed to sum it all up and provide recommendations for the department to implement.

This was arguably the most difficult aspect because it required me to do justice to the views of the students and make sure that their views were properly expressed. It would be disheartening for students if, by not expressing their views accurately as possible, the department misinterpreted the issue and so the wrong change was made in response to it.

I wrote a detailed report expressing exactly what the issues were and how they might be best resolved. I addressed each of the different aforementioned issues and provided as much detail as was necessary to make the point clear. One of the Representatives also presented the findings to the department in their SSCC meetings, which helped to convey the points orally.

What impact has this facilitation had on the department of Philosophy and its’ students?

Upon receiving Mohammad’s report, the staff started to make changes in the department to address the issues raised by the students, often following the recommendations made by Mohammad and the students of Philosophy. You can read more about what they did in the associated case study, and view the short video below.

Dr Luke Fenton-Glynn, Senior Lecturer in Philosophy, and one of the leading staff members involved in the project commented:

“I'm very grateful for all Mohammad’s efforts on behalf of the Philosophy Department and its students. Pleasingly, our NSS scores improved markedly last year, with overall satisfaction improving to 89% (from 70% the previous year) and our 'Assessment and Feedback' score improving to 77% (from 44% the previous year). Mohammad played a huge role in this turnaround - and I'm sure the department and its students will benefit for many years from the work he did with us.”

How were you supported as an ASER Facilitator?

The role is supported through the UCL ChangeMakers programme. The team there provided training and support and were able to show me exactly what I needed to do and what my timeline was. Most importantly, they assigned me the department to work with. I undertook the role in Philosophy with another student, who I was paired with during our training session for the role. Having not done the role before, it was a great comfort to have someone else who could help, support and provide suggestions.

Additionally, when liaising with the relevant staff, namely Dr Luke Fenton-Glynn, we were introduced to the Student Academic Representatives for the department. They were invaluable to the entire process, as students and representatives of the department, they had a strong rapport with the student body already. As such, all communications were made through them. For instance, when advertising a focus group students could attend, it was the representatives that undertook such tasks. They were extremely focused and dedicated to the role despite not being directly involved (i.e. being a part of the ChangeMaker process).

What would you say to a student considering becoming an ASER Facilitator?

Absolutely go for it!

This role has given me a great sense of self-worth. I’m really proud to have been a part of such an important and crucial mechanism of the governance and continued improvement of the world-class education UCL provides.

Though you are expected to be proactive and self-reliant, you’re not alone during this process; Abbie and Sandra in the UCL ChangeMakers team have been a great help whenever I’ve needed it."

What is ASER and who are ASER Facilitators?

ASER facilitators are students from another department, who help the Student Academic Representatives and departmental staff to work together to develop the departmental ASER action plan, particularly on assessment & feedback projects.

You can apply by 15 June to become a Student Quality Reviewer or an ASER Facilitator: find out more on the Students' Union website.

I'm very grateful for all Mohammad’s efforts on behalf of the Philosophy Department and its students. Pleasingly, our NSS scores improved markedly last year, with overall satisfaction improving to 89% (from 70% the previous year) and our 'Assessment and Feedback' score improving to 77% (from 44% the previous year). Mohammad played a huge role in this turnaround - and I'm sure the Department and its students will benefit for many years from the work he did with us.”
Dr Luke Fenton-Glynn, Senior Lecturer in Philosophy
“

If you're a current UCL student, you can apply by 15 June to become a Student Quality Reviewer or an ASER Facilitator: find out more on the Students' Union website

How student feedback is shaping UCL

Read more about this from the department's perspective

The National Student Survey 2018 is open until 30 April 2018: tell us about your UCL experience

Penultimate year undergraduates: share your views and you could win £500 (closes 8 April)