A recent Internal Quality Review (IQR) report highlighted the scheme as an example of ‘good practice’. 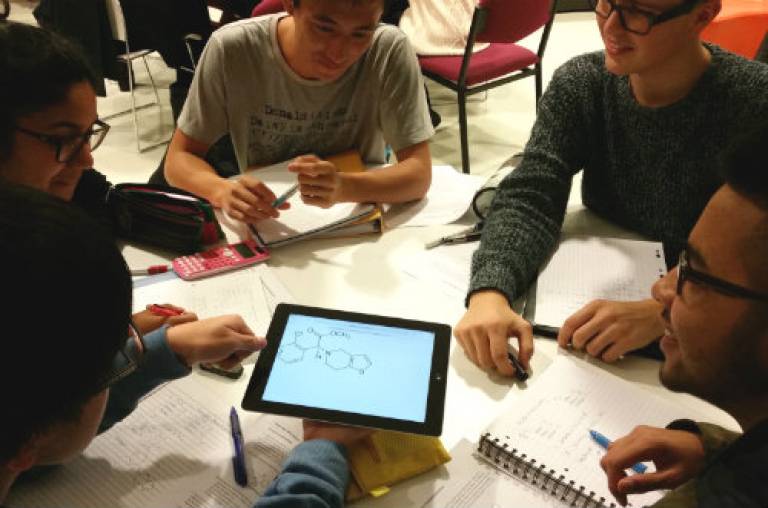 The UCL School of Pharmacy’s iPad lending scheme has allowed staff to ask students more challenging questions and has helped students make the most of classes, labs and workshops.

Responding to a change in needs

The department originally conceived the idea of iPad lending after the success of its laptop lending scheme which was developed in 2008.

Although the scheme continues to run, the team saw many rapid changes to technology and digital education as well as a decreasing amount of on-campus space and began to explore more compact options such as tablet devices.

In November 2013, the School launched an iPad lending scheme: as well as individual loans, administered by the department’s library, iPad’s were available for e-learning in large taught groups. There are now 95 iPads, five of which were donated by alumni, through the UCL Development & Alumni Relations office, and have the donors’ name inscribed on the back.

Students using iPads for a variety of reasons

Although many students have their own, the team have seen high take up of the scheme. Any student within the department is able to borrow one of the library’s iPads for a full day – borrowing within library hours.

The iPad automatically resets after each use, thanks to the department’s storage and charging machines.

Connected to EduRoam, the university’s wireless internet, students are able to use the iPad in lecturers, labs and workshops as well as for personal use. The team have noticed they are being used for a diverse range of tasks including downloading notes from Moodle.

Ensuring students all have what they need in workshops

50 iPads are used specifically in workshops.

This has enabled staff to teach knowing that students will have access to an Internet-ready device available with digital resources, including Moodle, Medicines Complete and the online British National Formulary (BNF), a pharmaceutical reference book.

They also have the latest specialist apps downloaded, to assist students with technical information including virtual models of organs and help with academic writing.

The students have between one and five iPads per table.

The scheme has relieved pressure on the department’s limited computer rooms and staff are able to use the iPad to challenge students, ask complicated questions and encourage discussion knowing there is access to an abundance of resources.

“We give all our students the chance to get a feel for working in a professional environment by using an iPad,” says Adam Phillips, E-learning Support Officer. “Most likely they will be expected to use the latest devices, such as tablets, in the pharmacy industry. For example, pharmacists doing rounds on hospital wards will likely use them instead of paper.”

Many students have commented on how helpful access to devices has been as the team regularly gathers feedback from short surveys.

“The general tone of the survey is very positive,” Peter Field Enquiry Services and Information Skills Manager, says. “Our scheme is a dynamic service informed by student feedback, most of which is focused on very specific suggestions for improvement about specific apps and software.”

Alongside this, the School’s staff have access to eight iPads which the team are planning to use to help them take attendance and registration for classes.

This would make registering attendance quicker and easier for staff and students. With more complete records, staff can intervene earlier where attendance seems to be incomplete. There are plans to roll this out in the new academic year, September 2016.

Looking ahead, the team feel that it’s difficult to predict how the scheme will develop. “Many students simply use their smart phones. In recent years they have become bigger and more sophisticated,” Adam says.

The team recently supported the Royal Free Hospital, part of UCL’s Faculty of Medical Sciences, in setting up their five iPads for video tutorials and has also helped the UCL Engineering Department to manage their iPads used by staff for student assessment.

The team are very happy to speak with colleagues interested in setting up a similar scheme and with those who already run a scheme and would like to benefit from knowledge sharing.