Dr Andrew Cook (UCL Institute of Cardiovascular Science) discusses the way he uses video to 'tell the story' of heart morphology with video equipment and his technique. 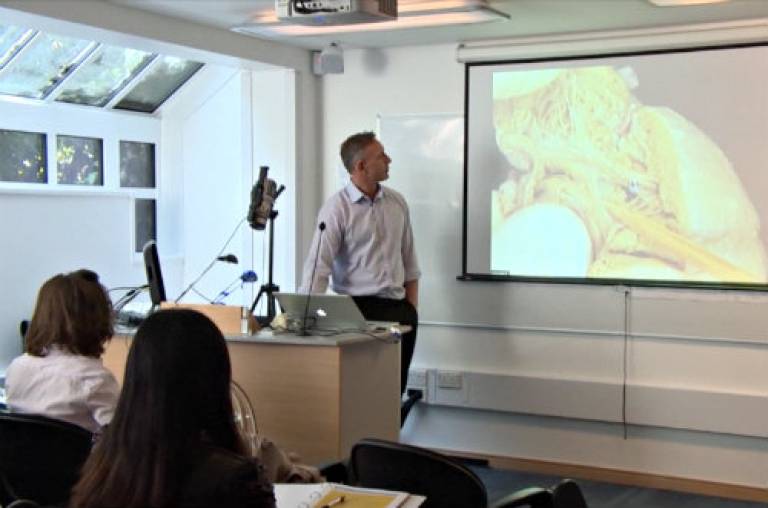 This interview is part of the ‘Lecturers on Video’ research project for Digital Education and Digital Media. The project, conducted in 2015, investigated how and why lecturers use video and what their future video requirements are for successful student teaching. A questionnaire was developed and an education producer, Dr Mike Howarth was commissioned to produce the content for the UCL Lecturers on Video research project.

"It is easier to build up the story using video. You can start off with the shots of a heart for instance and you can close in on particular aspect of the heart. As you are doing it you can explain the features that you're showing.

For me there's more of a flow to the lectures, to the talk, if you're using video rather than still images. In the ‘old’ days we used still images, snapshots of a heart, and the problem was that you had to spend a lot of time orientating people on each slide.

We often combine video with our object-based learning

We get the participants to look at hearts in an object-based way afterwards to reinforce the video. We could use other methods but I find it very difficult now actually to move back to still images.

We can use a combination: we use pre-recorded video clips of the heart specimens. Then on the courses that we run, where we can have access to the heart material during the course, we also intersperse the video segments with live demonstrations.

They find the whole thing much easier to follow than if we used, say, still images or a series of still images. They like the use of video. It is just that it takes a while for them to get used to seeing the image and orientating themselves. But by the end I think it benefits them. They certainly get a greater 3-D perception with the moving image than they do with a still image.”

More in this series of video tips