Studying ‘abroad’ during the pandemic

Frances spent her year abroad studying at University College Maastricht. In her penultimate blog she talks about the COVID-19 pandemic and how this affected her time in the Netherlands. During the last blog in February, it seemed unlikely that the COVID-19 outbreak would result in the widespread lockdown measures that happened. Then, everything in the Netherlands was normal and there had only been a few cases. In hindsight, it was obvious that the pandemic would have an effect on studying abroad. The growing number of cases in Italy was concerning, as that meant it was likely travellers from nearby Germany would probably have been to Italy for skiing trips earlier that month. Despite this, the general feeling was not too concerned and normal life carried on.  As I wrote before, Maastricht had their carnival mid-February. The annual celebration is a culmination of the month’s long carnival period, with the final parade gathering together many local residents, students and travellers from across the country and from abroad. Usually there are enough people that shops that are closed board up their windows and the streets become covered in disposable plastic cups. Unfortunately and fortunately, the weather was bad and the soggy parade was quiet.

Over the next few weeks as the cases rose in Italy, the first cases in the Netherlands were recorded and over the border in Germany, including cases related to carnivals there. Still, it didn’t seem as if the crisis would affect me. I was too busy focusing on trying to finish the last few weeks of classes and planning a visit back to the UK at the end of March. Then signs started going up around the university promoting better hand hygiene. Soon after there were less paper towels for drying your hands in the public toilets. The rush to get toilet paper did not really happen there and people liked to joke that they were more sensible. I remember that around the start of March the UK and the Netherlands had the similar number of cases. As less people live in the Netherlands, this meant there was more cases per person but there was not as much panic, at least among the students. 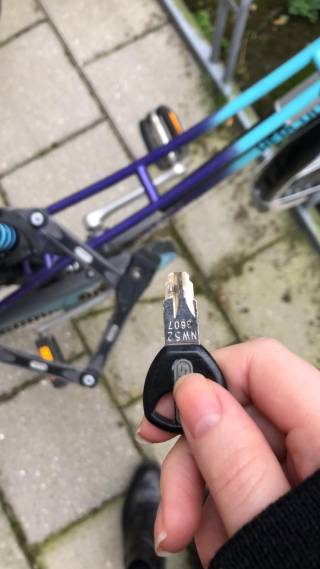 Towards the middle of March that changed quickly and each day seemed a lot more concerning. One Monday we were speculatively debating in our tutorial about whether the university would cancel classes and the next Monday I was packing my bags to leave. When UCL sent an email recommending we return to our homes, I did not immediately decide to leave. Although I had not used it, I had the perception that the health service was not going to be worse in the Netherlands than in England. It also felt like that I could wait out any lockdown, as it would only be a month or two, then I could finish some of my plans for the end of the year. After a few phone calls with my parents, I changed my mind. Two of my flatmates were British and two of them were French, all of them went home the same week that I did. A week or so before I left I borrowed my boyfriend’s old bike to buy vegetables at the market and the bike key broke inside of the lock. As far as I’m aware it’s still chained up outside my house and a lot of my other belongings I couldn’t fit in two suitcases were left behind. Packing up and the journey to the UK via the Eurostar was stressful, as well as quiet. Arriving in the UK pre-lockdown after seeing an empty Brussels was the most surreal experience.

Since the end of March, this meant I have been finishing studying abroad from my home in the UK. In spite of a time difference making the start of classes a bit confusing and the early morning classes even groggier, I have gotten used to the online timetable. My dog has also decided a few times that he would like to join in on meetings. The classes have usually been on Zoom but with the same students, topics and number of assignments. The final term ends next week and so far, the university has provided lectures, tutorials, online debates, Spanish classes, simulated EU negotiations and exams online. Certain experiences of studying abroad are still missing, but surprisingly a lot of the educational value remains. You cannot talk as much in classes but there is still the chance and a full schedule. In some ways, it could be a useful experience for working online in the future. I miss many things about living and while it was shocking to leave, I am lucky that it didn’t cause any serious problems for me. Fortunately, everyone has been put in similar situations during the lockdown.