George looks back on winter in Sweden with visits to Christmas markets and other parts of Scandinavia and looks ahead to his studies in term two. 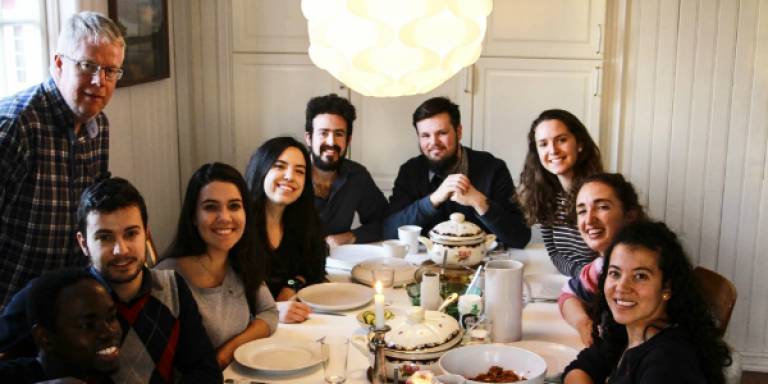 The winter in Sweden has been white and wondrous. As we never usually get much snow in England over Christmas, it has been incredible to be surrounded by a few feet of the stuff every day. Although I still haven't really enjoyed my courses at Uppsala University this second half of the term, the weather and general winter atmosphere has made the experience a lot more enjoyable and mysig (cosy). There have been many Christmas markets in small towns surrounding my city which I've been visiting with friends to sample smoked moose heart and warm glögg (mulled wine). At the market in Sigtuna I bought some reindeer meat sausages and goat's cheese for my family and I found some smoked moose steak in a small market in the middle of Uppsala. Needless to say, the family found them exotic!

In November I took a weekend ferry over to Tallinn in Estonia with a group of friends which was really fun. The ferry links from Stockholm are cheap and convenient – you can go from the capital to Finland, Mariehamn, Latvia and Estonia over one weekend, spend a day there and then come back on the Sunday. Whilst there, we visited a medieval style restaurant with a candlelit dining hall and a jug of water instead of a tap in the bathroom. The bear meat sausage was especially tasty and I washed it down with a litre of honey beer. We then went on a tour of the old city and got shown around all the historical sites. It was a great trip and only cost about 20 quid each!

In terms of studies, I have still been fairly demotivated and missing UCL because everything is a lot more laid back in Sweden and in my opinion, not as high quality in terms of education. I haven't really gotten on with the Swedish system, but thankfully I managed to change my courses for term 2 to mirror the kind of classes I was taking at UCL. Hopefully I will be more switched on starting in January and that's when I'll be starting to research for and work on my Year Abroad project.

For my project I am going to translate an old Norse saga (Hervarar saga) into modern Swedish and write an essay on the complications and difficulties of this, as well as the history of the saga and its physical existence. It's good because one of the original copies can be found at the Uppsala university library so I get to go in to the special reading room whenever I want and go through it. It's quite satisfying from the perspective of a history nerd to be able to read a copy of a legendary saga from the 1600s!

I have definitely adapted to the culture and society a bit more now so I feel more at home in Sweden, but it has been refreshing to be back in England over Christmas. I'll be taking back a box of mince pies with me because they don't exist over there (possible business opportunity?). The snow will probably last (and get worse) this month and well into February, which I am looking forward to, although it does get slightly old when you fall off your bike the first ten times due to wet ice. I'm planning on going back to Norway when my girlfriend visits from Brazil and most of my time will likely be spent hiding from the cold in the library.