The spacecraft will carry a payload comprising 10 separate instruments including remote sensing instruments and in situ instruments for observing the sun. Solar Orbiter was selected as the first element in the European Space Agency (ESA) Cosmic Vision 2015-2025 programme in October 2011.  Following the launch, which is planned for Ferbruary 2020, the Solar Orbiter spacecraft will orbit the Sun at ever closer distances, reaching 0.28 AU (1 AU – an astronomical unit – is the distance of the Earth from the Sun) by the end of the mission.  These near-Sun distances allow the spacecraft to orbit the Sun at close to the same angular speed of the solar rotation (~25.5 days), such that individual active regions on the surface will be beneath the spacecraft for an extended period of time.  The plane of the orbit will also be increasingly tilted, such that the spacecraft will reach higher and higher heliocentric latitudes (~34° by the end of the mission).

The SWA investigation is a major international hardware collaboration, led by UCL/MSSL (Principal Investigator: Prof. Christopher J. Owen).  In addition to the overall leadership of the suite, UCL/MSSL will provide the bulk of the hardware for the Electron Analyser System, one of the 3 sensor systems within the suite.  The Proton-Alpha Sensor and the Heavy Ion Sensor are led by partners in France and the USA respectively.  The central data processing unit, built in Italy, serves all 3 sensors and completes the suite. 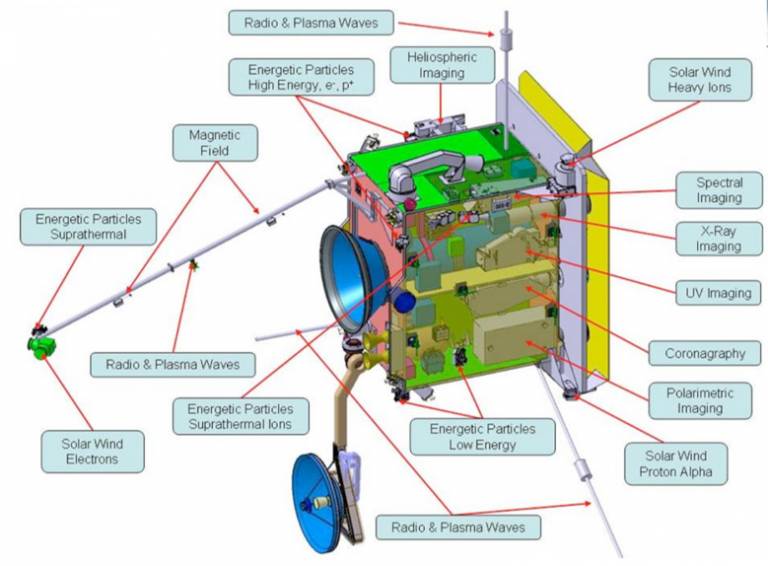 Requiring a heat shield to protect the delicate electronics and instruments from the full effects of the extreme environment it will face there. MSSL has a significant involvement in the Solar Orbiter mission on both the remote sensing and in-situ sides.