Solar Orbiter will explore the innermost heliosphere and unravel links between activity in the magnetic field-dominated regime of the solar corona and their consequences in the particle-dominated regime of the interplanetary medium.  These links will be revealed through analysis of observations of the Sun from a complement of powerful, high-resolution optical instruments, together with those from state-of-the-art instruments which sample, in situ, the properties, dynamics and interactions of plasma, fields and particles in the near-Sun heliosphere.  In addition, these plasma and field instruments have high temporal resolutions, and will thus resolve plasma kinetic processes in the solar wind at intrinsic scales. 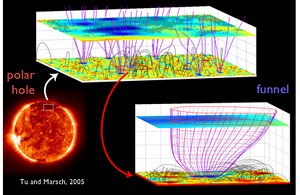 Q1) How and where do the solar wind plasma and magnetic field originate in the corona?

Q3) How do solar eruptions produce energetic particle radiation that fills the heliosphere?

Q4) How does the solar dynamo wo