DOT-HUB is an interdisciplinary research group focussed on the advancement of diffuse optical tomography for the human brain. Our group is built on decades of experience in fNIRS and DOT and is led by Dr. Rob Cooper, Prof. Jem Hebden, and Dr. Hubin Zhao 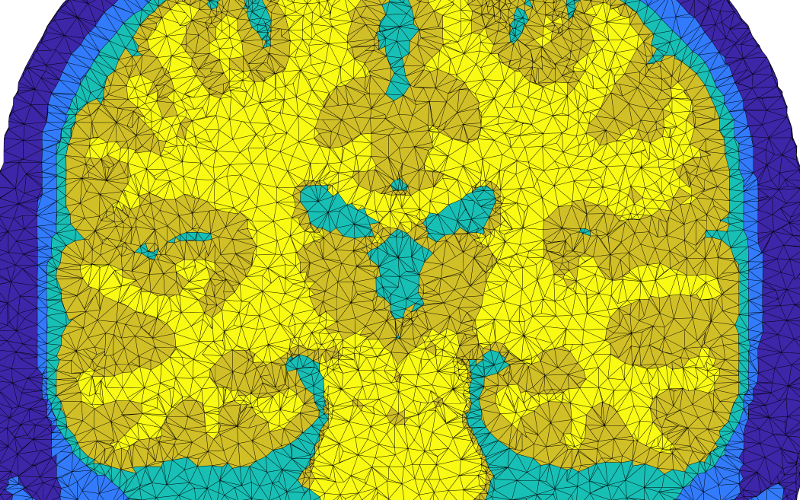 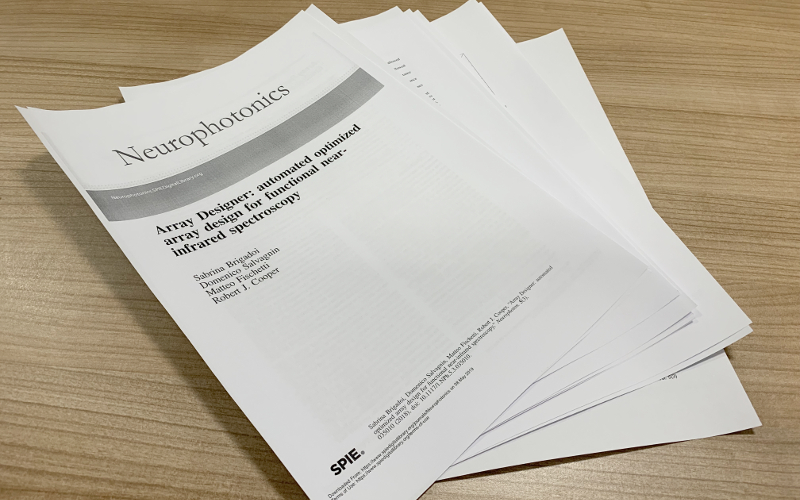 End of Year Summary, 2021
For obvious reasons, 2021 was another tricky year for data collection. However, the wonderful members of DOT-HUB have managed to make amazing progress none-the-less.

Back in January, Hubin and Lisa published the first paper describing the ANIMATE version 1 wearable HD-DOT system in Neurophotonics. Borja's paper on the use of fNIRS to assess functional networks in bilingual infants was also published around the same time. Addison's analysis of the response to spontenaoues and volitional laughter sounds in adults using fNIRS was published in Cortex and started a great conversation in the journal, with a series of letters published in response to the paper.  Hubin, with a big contribution from Julie, also set about compiling a review of wearable, integrated EEG-fNIRS technologies, which was published in Sensors and is Hubin's first paper as senior author. Liam published a paper in NeuroImage on the use of image reconstruction with low-density fNIRS, and Ernesto published the first detailed validation of the LUMO wearable HD-DOT system in adult brain imaging using a battery of visual stimuli:

On the conference front, DOT-HUB made significant contributions to ECBO 2021 (where we had a whole hour to ourselves in one session!) and to BioMedEng and the Virtual fNIRS conference.
We also has some great news in terms of career progression! Borja took up a post-doc at Cambridge with the Babylab on the Pipkin project, and is also working part time with Topun, Julie and neoLAB. Addison has also taken a post-doc role at the BabyLab, with Dr. Becky Lawson working on the Computational Neurodevelopment Project run by Dr. Becky Lawson (with Rob as a Co-PI).
In other great news, Hubin took a surprise lectureship post back at UCL! Based in Stanmore, but it means Hubin will continue to work within DOT-HUB as a PI!
Congratulations also go to Liam for winning an EPSRC post-doctoral fellowship, which means he too gets to stay within DOT-HUB but run his own project on functional networks in the developing brain.
Lastly, we are excited to welcome new MRes students Kui Wang and Yunjia Xia, who are working on a new approach to infant spatial registration, and PhD student Georgina Leadley, who is pushing multi-wavelength HD-DOT methods and applications.
Here's to an exciting (and healthy) 2022!

Read about our main areas of research and current projects below.

Newborn infants vulnerable to brain injury and often go on to develop cerebral palsy. Cerebral palsy is a group of permanent movement disorders that can severely limit the control of the muscles, and can have a devastating impact on quality of life. Cerebral palsy is also the most common form of childhood disability in Europe and every year, approximately 1,800 children in the UK are diagnosed with the condition. The early diagnosis of cerebral palsy is critical. While there is no cure for the condition, there are a number of treatments that can improve an infant's long-term motor ability. At present, the majority of infants with cerebral palsy are not diagnosed until 1 or 2 years-of-age. By this point it is likely too late for treatment to have the best possible impact. If infants with abnormal motor development could be identified early, these treatments would have the greatest chance of success. We think brain imaging can help understand and diagnose cerebral palsy. However, no current functional imaging available with the necessary precision, resolution, patient comfort, and motion tolerance.

The ANIMATE project is funded by the EPSRC and aims to develop a new wearable functional brain imaging technology to investigate the emergence of cerebral palsy in infants at the cot-side. The project is based at DOT-HUB, UCL and neoLAB, but depends upon critical collaborations with Prof. John Suckling (Cambridge University), Dr. Tom Arichi (Kings College London), Dr. Betty Hutchon (The Royal Free), Prof. Frances Cowan (Imperial College London) and industrial partners Gowerlabs.

Current research on this project involves many members of DOT-HUB, including Dr. Hubin Zhao, Elisabetta Maria Frijia and Liam Collins-Jones 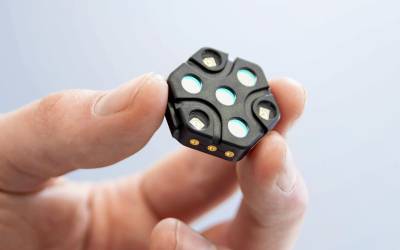 In collaboration with Gowerlabs, we are undertaking a series of proof-of-principal studies using the LUMO high-density diffuse optical tomography system.  These studies involve a range of experiments in a range of populations to test the performance of this new generation of technologies.

This work is being led by Dr. Ernesto Vidal Rosas and Elisabetta Maria Frijia. 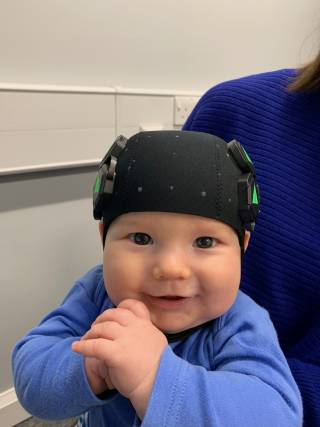 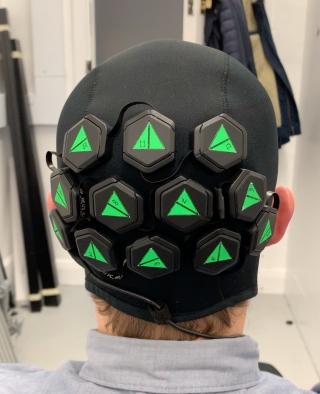 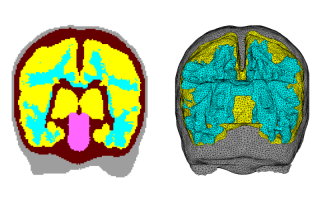 The infant head undergoes rapid structural changes on a timescale of weeks. Diffuse optical tomography (DOT) requires a model of photon transport from sources to detectors through a subject's head - and this requires structural information. A structural prior is a model of the head wherein tissues with different optical properties are delineated. Ideally, a structural prior would be produced using a subject's own MRI scan. However, necessitating an MRI scan for each subject undermines the benefits of DOT, notably its portability and its tolerance of motion that allows the infant brain to be studied in the awake state. At DOT-HUB we are developing anatomical models of the infant head using state-of-the-art MRI data from the Developing Human Connectome Project (dHCP) that can be used when modelling photon propagation within the head. At present we are developing a database of structural for infants aged 28-44 weeks post-conception and quantifying the effect on DOT image quality of using a structural prior from the database as opposed to a subject-specific structural prior. 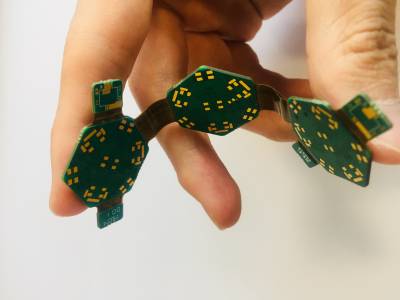 As part of the ANIMATE project, we have developed a neonatal-specific wearable high-density DOT module. It exploits flexible electronics to produce ultra-low profile, lightweight sensors that can be directly interconnected to form imaging arrays. By combining various modules together via in-built board-to-board connector, the system can be used to create wide range of ultra-lightweight, flexible HD-DOT imaging arrays. This will incorporate hundreds of emitters and detectors of near-infrared light to safely image the whole cortex of infant brain.