ADVIRC is a dominantly inherited bestrophinopathy which affects the Retinal Pigment Epithelium (RPE) cells of the eye. ADVIRC, which was first discovered in the 1950’s causes retinal degeneration, appears to affect eye development, and is very different from the other Bestrophinopathis. ADVIRC is a rare disease, thought to affect less than 1 in a million people. Patients are usually diagnosed with ADVIRC in the first decade of life.

How does ADVIRC affect the eye?

Patients with ADVIRC’s have a highly pigmented circular band present in the outer regions (periphery) of the retina, with a distinct border between the highly pigmented retina and normal retina. This so called, “hyperpigmented” band is a distinctive characteristic of the disease in all older patients.  Early in the disease ADVIRC affects the outer retina and there may be very little change in the appearance of the central retina, but as ADVIRC progresses it can affect the macular region, causing central vision loss. Other features of the disease include white/yellow punctate deposits, seen as dots or specks present throughout the retina, choroidal neovascularisation leading to bleeds in the retina, atrophy (death) of retina and scar formation. ADVIRC may also affect the development of the optic disc and the size of the retinal arteries. The image below is a schematic for ADVIRC: 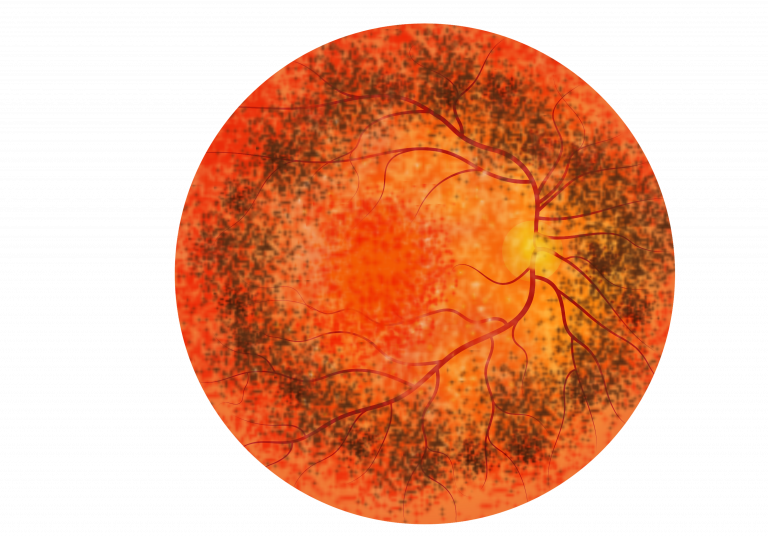 Patients with ADVIRC can have vision ranging from light perception to 6/6 on a Snellen chart at presentation, however, the majority of patients have vision which remains stable at least 6/12 measured on the Snellen chart until late in life. Typically, after a patient reaches their twenties, vision may remain stable and slowly decline with age. However, some ADVIRC patients can have a rapid decline in vision in the second decade of life.

Patients with ADVIRC are also more like to suffer from eye development issues, such as microcornea (a smaller cornea which is less than 10mm in diameter), hyperopia (being long-sighted), having a narrow anterior chamber angle (a risk-factor for acute angle closure glaucoma), formation of cataracts and nanopthalmos (having an unusually small eye).

Are there any complications associated with ADVIRC?

There are a number of complications associated with ADVIRC that can affect vision:

Swelling caused by fluid build-up, could also be a complication which if untreated could lead to vision loss.

Occurs when there is death of the RPE and its surrounding retinal layers which can lead to the choroid and even the sclera being seen through the fundus image due to the absence of pigmented cells.

A retinal detachment, where the retina peels away from the back of the eye is an eye emergency and needs treatment straight away. A sudden increase in floaters (moving lines and dots in your vision), flashes of light or a shadow over your vision are all signs of retinal detachment and should be treated immediately to prevent permanent vision loss.

Occurs when blood leaks into the vitreous humour, which could lead to a sudden loss of vision.

What are the treatment options for ADVIRC’s?

There is currently no medical or surgical treatment option available for ADVIRCs, or any of the bestrophinopathies, however research is ongoing and promising. Patients are encouraged to visit the many charities and support group which exist for those suffering from bestrophinopathies.

Many treatments are available for the complications of ADVIRC:

Anti-VEGF injections can be injected into the eyes of patients in a hospital setting by doctors to stop the growth of new blood vessels, with the aim of preserving vision.

The swelling causes by cystoid macular edema can be treated by injection of diuretics and steroids into the back of the eye.

Hyperopia (the ability to see objects at distance but close objects appear blurry) can be treated with prescription lenses and contact lenses.

Patients at risk of glaucoma receive regular monitoring to check the pressure within the eye. Glaucoma can be treated using eye drops during the early stages, and with laser treatment or surgery in later stages.

Photocoagulation therapy, where a laser is used to burn off or fuse together the retina can be used to treat chorioretinal atrophy.

Surgery to repair the retina is the main course of action if somebody suffers from a retinal detachment.

Surgical and laser treatment also are viable treatments for patients who develop a vitreous haemorrhage, although it can take months for the blood to clear.

Nystagmus can be alleviated to some extent with a host of treatments including Botox injections, however these may only temporarily relieve symptoms.

There are no cures for Microcornea and Nanopthalmos, instead treatment focuses on alleviating symptoms and reducing further complications.

Research into treatments for ADVIRC is ongoing. Patients are encouraged to visit the many charities and support groups for bestrophinopathies.