The retina is the light sensitive region of the eye and can be easily viewed by healthcare practitioners using light connected to a magnifying lens (an ophthalmoscope). A snapshot of the retina can also be taken using a microscope attached to a camera. This so called fundus image allows eye doctors to examine the health of the retina and identify any potential issues that may affect sight. The retina is transparent, allowing eye doctors to see the blood vessels supplying the retina. The eye is the only part of the body in which blood vessels can be directly viewed. Doctors can also use the fundus image to look at the health of the optic disc and the macular region.

The central area of the retina is known as the macula, (Latin for yellow spot). Within the macula a specialised indentation, called the fovea, contains the greatest concentration of cone photoreceptor cells, the cells responsible for detecting colour. This high concentration of cone cells allows for the fine vision needed to read, drive, watch TV and recognise faces. Next to the macula is a bright spot, the optic disc. The optic disc is the start of the optic nerve, where the electrical visual signal produced by the retina is carried to the brain to form an image. The optic disc creates our ‘blind spot’ as no photoreceptor cells reside here. 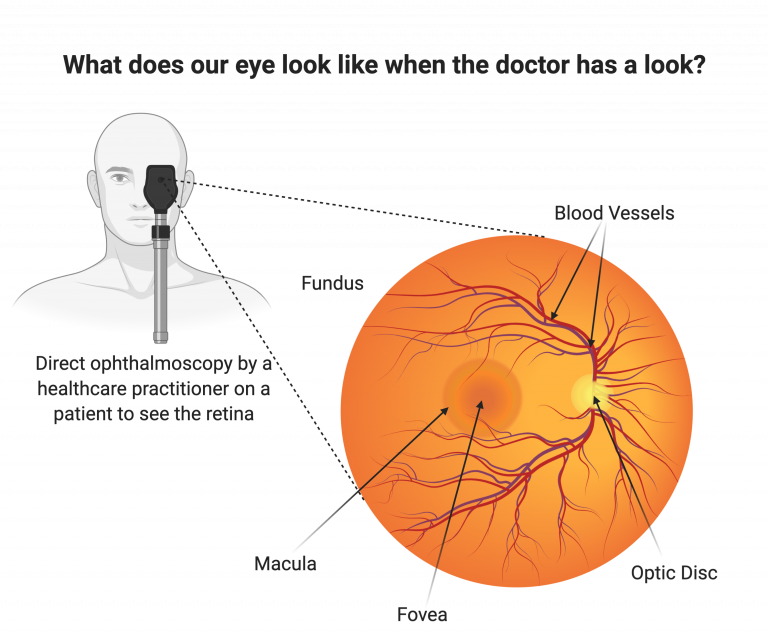 The retina is composed of 10 distinct layers composed of different cell types, with specialised roles. Light passes through all the layers of the retina before it reaches the layer containing the photoreceptor cells. The photoreceptor layer of the retina consists of light sensitive cells known as rods and cones. There are around 125 million rods and 7 million cones in our eyes. Rods are needed for vision in dim light/night time conditions, whereas cones work best in bright light conditions and are essential for distinguishing between colours and forming a clear accurate image. Photoreceptor cells are highly specialised cells that absorb light and, through a cascade of chemical signals, convert it into electrical information needed to visualise an image. 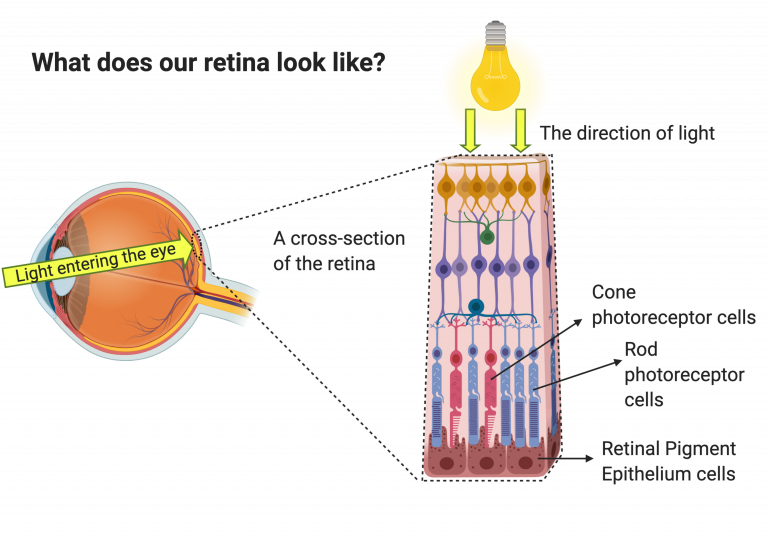 Beneath the photoreceptors is the retinal pigment epithelium (RPE). The RPE is a single layer of cells tightly joined so that they form a barrier between the retina and the underlying choroid. The RPE has crucial functions that are needed to keep the retina alive and enable photoreceptor cells to detect light.

In order to work effectively, the light absorbing parts of the photoreceptor cells need to be replaced daily. The RPE acts a recycling station for this waste material, collecting this debris in a process known as phagocytosis, before recycling the useful parts, which can then be reused. The RPE cells, ensure that debris does not build up underneath the retina.

The RPE are pigmented because they contain a dark pigment molecule called melanin. Melanin absorbs any stray light that may interfere with the visual image.

The RPE form a barrier between the retina and the choroid. The RPE is a single layer of cells underneath the retina. Individual RPE cells are tightly joined to their neighbours, producing an effective barrier that regulates the transport of nutrients, water and molecule solutes between the retina and choroid. This barrier also prevents the infiltration of new blood vessels from the choroid. When the RPE barrier is compromised during disease this can lead to choroid neovascularisation (growth of new blood vessels into the retina). 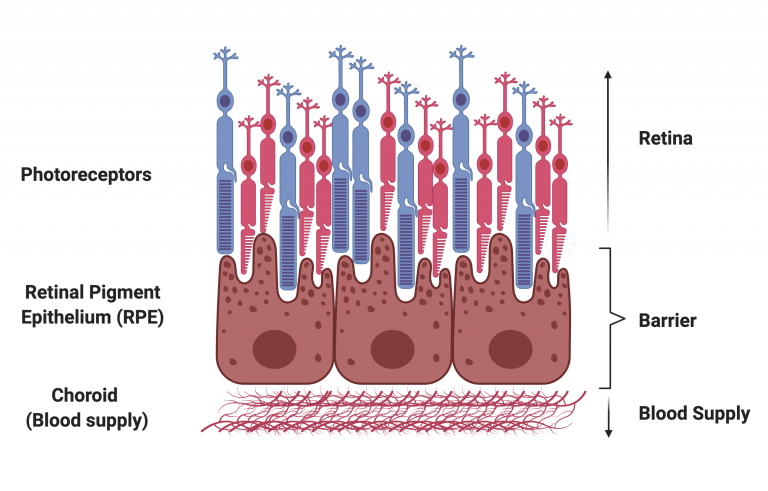 The RPE acts as recycle station, recovering key proteins from retinal waste before returning them back to the photoreceptor cells.

RPE cells are not light-sensitive, but they do help maintain the light sensitive photoreceptors in the retina. Without functional RPE, the photoreceptor cells become damaged and vision deteriorates. This phenomenon is seen in many diseases including age-related macular degeneration and inherited forms of blindness, such as bestrophinopathies.