According to his final will, dated 30 May 1832, Bentham left to friends twenty-six mourning rings made by John Field in 1822. Until recently only three rings were identified: one bought by the College in 1986, now displayed on the table beside Bentham's Auto-Icon in the South Cloisters at UCL, and another included in a portrait of José del Valle, a Guatemalan lawyer, economist, and politician (Catalogue, No. 37). In 1997 the ring left to William Tait, the Edinburgh bookseller and publisher, who published the edition of the works of Jeremy Bentham, under the general editorship of John Bowring, was bought at Phillips, the auctioneers, and was included in the exhibition, The Old Radical: Representations of Jeremy Bentham in 1998 (Catalogue, No. 36).

Three more rings have since been located. In 1999 University College received as part of the Denis Roy Bentham Collection, the mourning ring presented to Jean Sylvain van de Weyer (1802-74), a leading Belgian politician, and the Belgian Ambassador to London at the time of Bentham's death. In the same year another ring was brought to our attention by a collector in Middlesex. This ring was given to William Stockwell, a servant boy, who worked for Bentham, during the last years of his life. 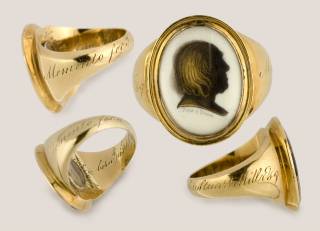 © UCL Digital Media Services
An image of the rings

In May 2007, the Bentham Project was presented with the mourning ring belonging to John Stuart Mill (above), and this artefact which connects the two most famous exponents of Utilitarian philosophy is perhaps the most treasured of all the rings. The ring was bought in New Orleans in May 2004 by Michael Phillips, who graduated from UCL in Law in 1970, and was made a fellow of UCL in 2002. The Bentham Project is most grateful to him for donating the ring to UCL.