Denis Roy Bentham (1923-99), having served in the armed forces in the Second World War, was employed by the Post Office in his hometown of Loughborough from his demobilisation in 1945 until his retirement in February 1983. He began collecting manuscripts and other memorabilia in the 1950s, and continued to do so until his death on 20 June 1999. Whatever his inspiration, he amassed a massive collection of rare books, manuscripts, prints, and other memorabilia, as well as mechanical toys.1 He was an inveterate collector - he retained not only all the correspondence he received, but the envelopes in which it came, as well as his shopping bills for the previous forty years. 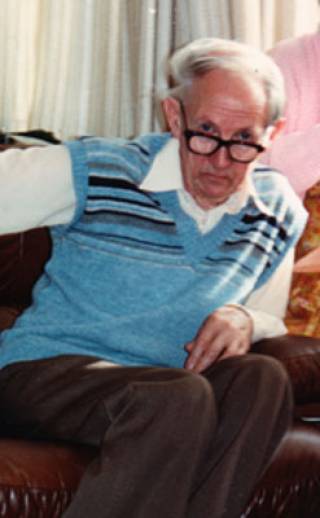 There is correspondence relating to John Bowring, Bentham's literary executor, and other well-known figures such as John Stuart Mill, as well as one of Bentham's mourning rings, and a lock of his hair. There is, moreover, a bundle of items relating to C.K. Ogden's interest in Bentham, dating from the mid-twentieth century.

It is not clear why Mr Bentham was so interested in Jeremy Bentham. He may at one time have thought that his family might be related to Jeremy Bentham, as his was the only family in Loughborough at the time with the Bentham surname. Perhaps he was also attracted to Bentham because of his own radical political leanings, being at one time a member of the Communist Party of Great Britain.

Mr Bentham would no doubt be described as something of an eccentric. However, one must recognize his outstanding and extraordinary achievement in making what must be by far the largest collection of Bentham material ever amassed by a private individual. The commitment and dedication over four decades beggars belief - all the more so when one considers that Mr Bentham did not have any formal education after leaving school. He was not systematically minded, and so never organized his collection into a formal catalogue: the impression which I had of his house was one of a rather friendly confusion. Nevertheless I'm sure that he knew where every single item was. He had a great love for his manuscripts, and was well known amongst dealers, having built up an extensive network of connections over the years. It is not without irony that on many occasions at auctions he outbid representatives from UCL for Bentham items. Yet the generosity of spirit of Mr Bentham was revealed in his willingness to share his manuscripts. He assiduously sent photocopies of his 'Benthamiana' to the Bentham Project, and where appropriate items of correspondence have already appeared in the volumes of Correspondence.It is not clear why Mr Bentham was so interested in Jeremy Bentham. He may at one time have thought that his family might be related to Jeremy Bentham, as his was the only family in Loughborough at the time with the Bentham surname. Perhaps he was also attracted to Bentham because of his own radical political leanings, being at one time a member of the Communist Party of Great Britain.

The bulk of D.R. Bentham's collection was disposed of at auction by Trevor Vennett-Smith, but the pride of the collection, the material relating to Jeremy Bentham, has been donated to University College London Library, by Mrs Eileen Wardle, the surviving sister of Mr Bentham, to form the Denis Roy Bentham Collection. A first batch of material was collected by Ms Catherine Fuller and myself on 8 September 1999 from the home of Mrs Wardle in Loughborough. Upon checking the photocopies of the items which Mr Bentham had sent to the Bentham Project, I discovered that around forty items were unaccounted for. I prepared a list of these items, which I sent to Mrs Wardle, who forwarded it to the auctioneers. The auctioneers managed to find almost all the items in question, as well as a number of additional items. Dr Colin Tyler and myself then revisited Mrs Wardle on 11 October 1999 in order to collect the remaining material. In addition, a large number of printed books, including a full set of those Collected Works of Jeremy Bentham which had appeared at the time of Mr Bentham's death, were also donated to UCL.

I visited Mr Bentham in February 1999. He lived in a modest 1930s semi-detached house at the end of a quiet cul-de-sac about half a mile from the centre of Loughborough. This house had been acquired new by his mother and father, and he lived there with his parents until their death, whereupon he inherited the house. The parents regarded Mr Bentham as somewhat unworldly, and so had attempted to put the house in an excellent state of repair so that the son would not need to worry about it. He remained a very impractical man, though when I visited him he was pleased to be able to tell me that he had just had the windows replaced with double-glazing, and had much of the interior of the house repainted. He also used a microwave with which to provide me with lunch! He was a small, wiry man, who seemed very fit, though his sister later informed me that he had angina. He showed me a number of his manuscripts, as we sat in his front room with the curtains almost drawn, with a dingy electric bulb glowing over the table which dominated the room, and the old gas fire just about alight. When it was time for me to go, he walked me through the town centre to the local bookshop, where he proceeded to buy a letter from Bentham to C.S. Cullen, and a number of prints of Bentham. If this was intended to impress me, then it certainly did! I promised I would return later in the year to see him, when he said he would show me other items in his collection.

A catalogue of the Collection has been prepared by Mr Oliver Harris of the Bentham Project, in consultation with Ms Gill Furlong, of the Rare Books and Manuscripts Library, UCL. The manuscripts and rare books, and the Ogden materials, are deposited in the UCL Library, the mourning ring and lock of hair in the Strang Print Room, and the modern scholarly books in the Bentham Project.

I would like to acknowledge the generosity of Mrs Wardle in her gift of the material to UCL. The Denis Roy Bentham Collection will keep alive the memory of her brother, and of his incredible, and unlikely, contribution to Bentham scholarship.