About the Bentham Project 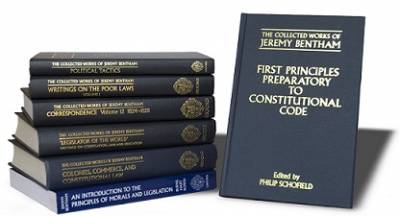 The Bentham Project, based within the Faculty of Laws at University College London, has the principal aim of producing a new critical edition of The Collected Works of Jeremy Bentham, making fully available for the first time the complete writings and correspondence of Jeremy Bentham (1748–1832)—utilitarian philosopher, legal and political reformer, codifier, man of letters, and social scientist—whose extensive corpus of manuscripts, covering all manner of subject-matters, was written over the course of several crucial decades in British and world history.

The case for producing a new edition of Bentham's works rests partly on the importance of his thought, and partly on the inadequate and incomplete fashion in which his works were previously published. His writings are remarkable for their range, originality and influence. He was one of the greatest reformers, perhaps the greatest, in the history of English law. He was a legal philosopher of major importance, being one of the founders of the theory of legal positivism. In ethics he provided the classic exposition of the utilitarian theory which has been a major strand in moral philosophy since the eighteenth century. In political thought he was important both as a critic of established doctrines such as that of natural law, and as the originator of one of the main theoretical justifications for democracy. In the fields of public administration and social policy, he arguably had more influence than any other thinker on the process of administration and social reform in Victorian Britain. In economic thought, his ideas about the measurement of utility lie at the root of modern theories of cost-benefit analysis and welfare economics. He has been recognized, too, as a pioneer in other fields ranging from international law and the birth control movement to motivational psychology and deontic logic.

In 1968 when the first two volumes of the new Collected Works appeared, Maurice Cranston wrote in The Guardian: `Of all the great theorists of the Age of Reason, Jeremy Bentham has hitherto been the most neglected'. This neglect was attributable in part to the unsatisfactory nature of the only collection of his works which then existed, brought out by his disciple Sir John Bowring in 1843, eleven years after Bentham's death. This edition was unattractive in format and so closely printed as to be barely legible. Moreover, it omitted a number of works that had been published in Bentham's lifetime (notably those concerning religion), as well as many substantial works which had not been published but which survived in manuscript. The memoir of Bentham contained in the last two volumes, which was described by Sir Leslie Stephen as one of the worst biographies in the English language, included only a fraction of his correspondence. Much of the editing was of very poor quality, and several of the works included by Bowring were translations into English of French versions of Bentham's writings which had been edited and published in the early nineteenth century by his Genevan follower, Etienne Dumont.

Dumont's recensions had a very wide circulation and were largely responsible for giving Bentham an international reputation; but although based on Bentham's manuscripts they departed from them in various ways and presented his ideas in a somewhat simplified form. The policy of the Bentham Project is to return to what Bentham himself actually wrote, for as Professor D.D. Raphael said in The Times Literary Supplement, 27 September 1974: `The more we come to know his writings (as contrasted with the presentation of his thought by his contemporary editors, Dumont and Bowring), the more clearly we see that Bentham was a powerful and subtle thinker.'

The task of producing the new edition is a daunting one. It involves the exploration of a very substantial body of manuscript material, the principal collections being those in University College itself, and in the British Library. With regard to Bentham's correspondence, which has never before been comprehensively collected, material from a much larger group of archive collections has to be assembled and annotated.

In addition, for works published during Bentham's lifetime, contemporary editions must be collated, and decisions of a complex character taken in regard to the authority to be ascribed to various versions of the texts. It is envisaged that when completed the edition will comprise approximately eighty volumes, of which fourteen will be devoted to Bentham's correspondence. Such an edition will, it is hoped, make available a fuller and more inclusive view of Bentham's thought and of his contribution to the science of man and society than has been possible hitherto.

Supervising the Project is the Bentham Committee, established in 1959 as a committee of the Council of University College London. The Committee has been chaired successively by Lord Cohen, Lord Robbins, Professor H.L.A. Hart and Professor W.L. Twining. The present chairman is Professor J. Wolff.

Since 1968, thirty-four volumes of the new Collected Works have been published under the auspices of the Bentham Committee.