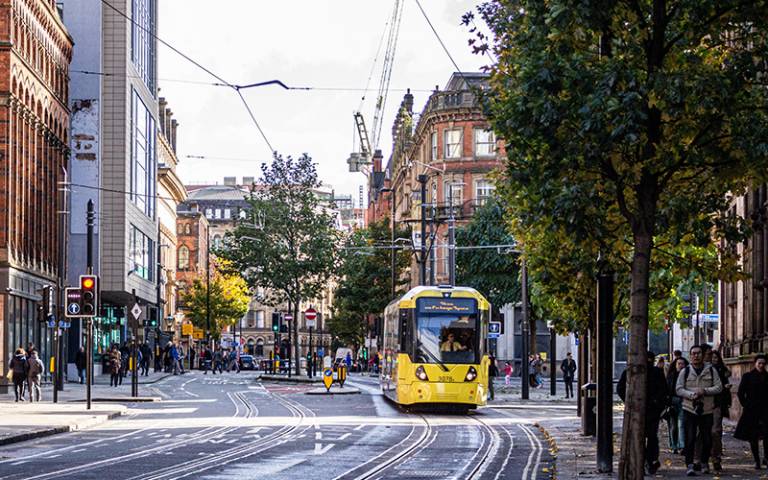 UCL Institute for Innovation and Public Purpose has been working closely with the Greater Manchester Combined Authority (GMCA) since late 2018 when Professor Mariana Mazzucato served as a commissioner for the Independent Prosperity Review. Over the past two years IIPP has supported GMCA through the PELICAN project, during the city-region’s implementation of the 5 Year Environment Plan. The plan uses a mission-oriented approach for clean growth, developed with IIPP.

In January 2021 Prospect magazine published a special report on The Green Recovery, opening with an article by Mayor of Greater Manchester Andy Burnham. Burnham focuses on the approach championed by IIPP’s work through the PELICAN project: the need to connect the COVID-19 and climate crises, and orienting the local economy’s recovery efforts toward the city’s carbon neutrality ambition in a way supports equitable urban rejuvenation.

IIPP Head of Green Economy and Sustainable Growth Martha McPherson also contributed to the report with a piece on the need for a ‘just transition’:

‘As we come up against the triple threat of the healthcare crisis, the economic emergency and the unfolding climate crisis, workers’ groups of all types should have a genuine involvement in shaping the green jobs agenda. The framework of the “just transition”—in which there are specific re-training routes developed for workers in polluting industries—should be a guide for the UK’s green industrial revolution.’

The GMCA hosted a workshop with IIPP in mid-November 2020 which explored the initial findings from the PELICAN project with GMCA’s local partners, who are collaboratively implementing the mission-oriented approach. The workshop was attended by IIPP Deputy Director Rainer Kattel, Martha McPherson, and IIPP Senior Research Fellow in Cities, Climate and Innovation Ryan Bellinson. Professor Kattel spoke on the opportunities to build new partnerships and accelerate the progress of the mission-oriented approach, now that Greater Manchester’s missions have begun to be implemented.

IIPP has also contributed to an updated version of Greater Manchester’s Independent Prosperity Review – One Year On. The review, published in September 2020, assesses the progress Greater Manchester has made since the initial report’s launch and analysed the potential economic impacts of COVID-19 for the city-region. IIPP shared analysis of this report to more broadly consider how mission-oriented innovation could be utilised as an approach by governments to respond to the climate crisis and COVID-19 recovery.

IIPP is continuing to work closely with the GMCA as they enter the second year of implementing their clean growth mission.

IIPP’s PELICAN project focusses on the city systems across the world that are on the frontline of climate change, and city problem owners occupy a pivotal role in the green transition. In particular, the PELICAN project enables IIPP to work closely with the city-region of Greater Manchester to demonstrate, at city level, the Mission-Oriented Innovation (MOI) approach to clean growth developed by IIPP.

For more information on the PELICAN project, please contact: