The event explored the role of time in making space, with Carol Mavor giving an enchanting critical performance and architect-composer Duo revealing a new interdisciplinary architecture. 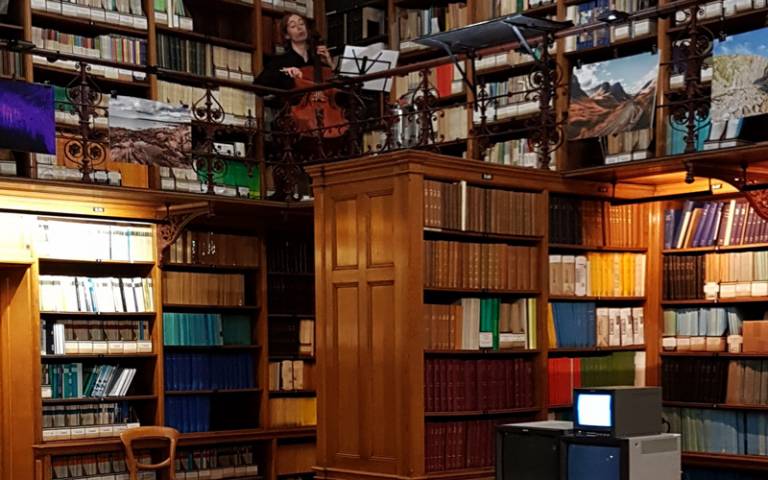 Bartlett School of Architecture (BSA) doctoral students brought together writer and filmmaker Carol Mavor and architect-composer collaborators Steve Chance and Scanner at the Royal Academy of Arts for an exciting evening examining the relationship between time and space.

The fully-booked Time | Making | Space event on 7 December was launched with an exuberant contextualising introduction by host Ruth Bernatek, PhD candidate and co-founder of the doctoral initiative Sound Making Space at BSA. Ruth’s talk outlined the impact of time on architecture through animating urban forces, weathering and our dynamic experiences of inhabiting spaces.

Steve Chance, of London’s Chance da Silva Architects, and electronic composer Scanner (also known as Robin Rimbaud) used sound, image and word to co-present their joint north London project Vex. Inspired by Vexations, Erik Satie’s 1893-4 short enharmonic musical composition, to be repeated 840 times, Vex is a house of stacked cylindrical forms and a looping musical composition made for each other.

The conversation with Mavor, Chance and Scanner illuminated the role of repetition – through rhythm, echo, reiteration, recall and resonance – in creating a sense of spaciousness by maintaining a durational in-between, rather than dividing time in linear fashion by measure.

After a Q&A, and during a drinks reception in the library adjacent to the auditorium, a piece composed by Matthews specifically for the space was performed on violin and cello, while a trio of video monitors screened a work by Hölsgens, in which phenomenologies of physical distance and a temporal lag between people are articulated and explored.

See more news, events, blogs and publications from PhD students at the Bartlett

PhDs at The Bartlett School of Architecture

Find out more about the School’s MPhil/PhD programmes