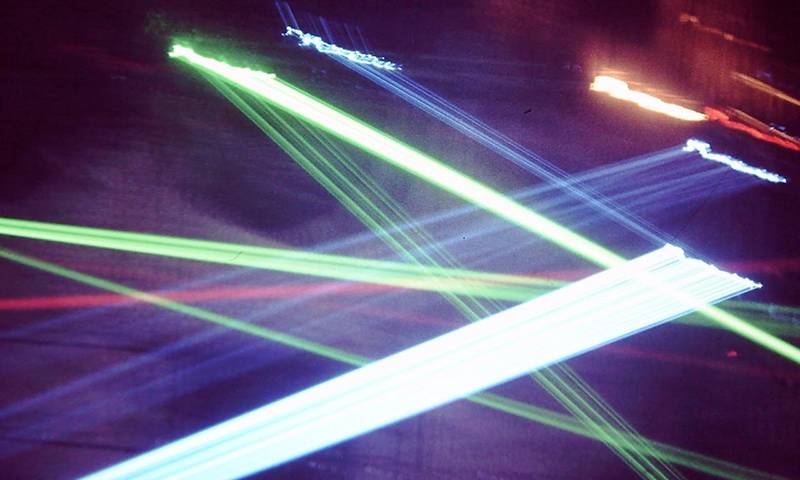 My doctoral research contributes to an understanding of the material and cultural presence of music in architecture, its history and design in the twentieth century, by addressing the polytope projects: a series of large-scale interactive multimedia works of ‘light, sound and movement’, performed between the years 1967 and 1978, and conceived by the architect and composer, Iannis Xenakis (1922–2001).

Literally translated the word ‘polytope’ means ‘many places’ (poly-topoi). There are five realized polytopes, which were performed in Québec, France, Greece, and Iran. For each polytope, Xenakis uses cutting-edge technology to construct temporary ‘invisible architectures’ from light and sound within pre-existing physical architectures or on historical and archaeological sites. He organizes ‘polytopian’ space using using vast networks of steel cables, flashes, lasers and loudspeakers, live and electroacoustic music. Although the spatial network of each polytope is articulated differently, they all stimulate dynamic experiences that transform the spatial identity of the site; sound is used both to explore the acoustic qualities of the pre-existing space but also, alongside light, to create a new spatial effect.

The primary objective of the research is to advance an understanding of Xenakis’ unique conception of sound and space in the polytope performances, and to determine the wider relevance of these audiovisual works as a subject of study for architecture. Based on archival material and site-specific research, I will evaluate evidence to suggest potential legacies of the polytopes that exist unacknowledged in the architectural histories of the 20th and 21st centuries, specifically modern auditory spaces and post-1945 soundscapes of ‘spectacle’. To assess the importance of polytopes for the interrelated fields of architecture and music, primary case studies are critically explored through themes of echo, space, place and event (time).

The project moreover is grounded in a historical and theoretical investigation of the nexus between cultural histories of modern sound and listening practices, post-1945 developments in experimental acoustic technology. At the same time, I set out to address pertinent questions concerning the nature of sound archives, and what they represent as a resource or material, within architectural history and theory.

Ruth Bernatek is a PhD student in Architectural History and Theory at The Bartlett. Her research addresses the complex relationships between music and architecture in the ‘Polytope Projects’, a series of large-scale multimedia installations conceived by the composer and architect Iannis Xenakis, between 1967 and 1978. Taking an interdisciplinary approach to research, she draws on her academic background in Art History, and training as a classical musician. Ruth is a tutor for the History of Art Department at UCL, and co-founder of the doctoral initiative Sound Making Space at The Bartlett. Her PhD is funded by the London Arts and Humanities Partnership.