Bartlett film-makers on top of the world 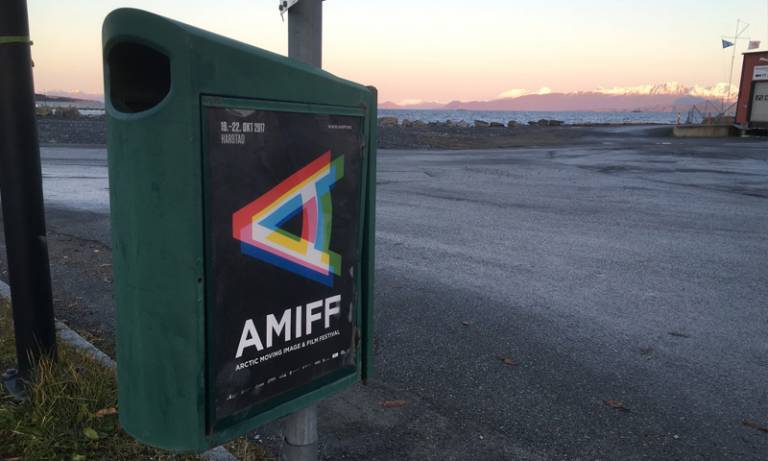 Fresh from her work with the Bartlett Film+Place+Architecture Doctoral Network and the Architecture Film Festival London, Andersen curated a screening of films by British filmmakers engaging with the built environment. Alongside White Mountain (2016) by Emma Charles, the screening included Ollie Palmer’s film Scriptych (2016). With funding from the Bartlett Doctoral Conference Fund, both Palmer and Andersen – Bartlett PhD candidates in architectural design – were present at the festival, in Harstaed, Norway, on 19th to 22th October 2017.

Palmer made Scriptych (2016) in collaboration with Simon Valastro when he had an artist residency at Palais de Tokyo in 2015 – 2016. The film captures a live performance at the Paris Opera Palais Garnier, where two dancers are equipped with embedding sensors, which measures their movement and control both music and the words spoken aloud in real time. Filmed from above, the couple’s communication becomes increasingly fragmented as the piece develops, posing questions about the location of meaning in messages and movements, and the impossibility of communicating true intent. Scriptych (2016) formed an integral part in Palmer’s PhD thesis on scripted performance, completed in 2017.

The screening focused on architecture and film. In the specific context of the Arctic Moving Image and Film Festival, the conversation revolved around the way artists making films can think about the architecture and built environments in their work. Palmer’s work opened for questions regarding control and technology, discussed in detail during the Q&A chaired by Andersen. Andersen’s own film, Journey to Italy (2016), was screened as part of the open call, themed transformation. Forming a central role in Andersen’s PhD thesis focusing on the window in the life and theory of Christian Norberg-Schulz, the film is based on a five-day train journey between Norway and Italy. Considering the window of a train as a quite specific, and highly mobile site where both thinking and life can take place, the lens captures changing landscapes, climate, architecture and light, where the use of MRI (magnetic resonance imaging) depicting and moving through a human foot uses this alternative imaging technology to create alternative, even conflicting views of mobility and spatial orientation. Andersen’s film project was funded by the Bartlett Doctoral Research Projects Fund.