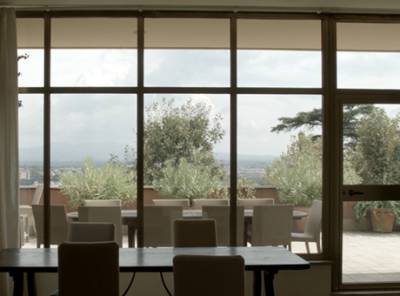 The window is an architectural element, which relates to the human needs of air, light and view (Loew, 2007), but through its frequent and varied use as a multifaceted concept and metaphor, its meanings go far beyond its physical, spatial definition, and can involve notions of insight, transition, framing or even the photographic process (Hellman, 2013).

This research builds upon this multifaceted understanding of the window as a flexible concept, appearing both in language and in our physical world (Eckmann, 2007) to investigate the role of the window in the life and writing of the Norwegian architectural historian and theoretician Christian Norberg-Schulz.

I am interested in exploring how this understanding of windows relates to a Norwegian cultural context, where he argued nature is “everywhere close and strongly felt” (Norberg-Schulz, 1986, 5).

Aiming to draw new attention to Norberg-Schulz’s authorship and the role of windows in his life and work, and in order to find new ways of discussing identity in connection with natural surroundings, I adopt a practice led research methodology, using film-making, accompanied by discussions in a more traditional written academic format.

As the window operates both as my object of study, and as my research tool, it works both as a frame and opening onto Norberg-Schulz’s life and authorship, while simultaneously drawing critical attention to my own positioning as a researcher, but also as a ‘follower’ of Norberg-Schulz, exploiting the potential of critical spatial practices to “challenge criticism as a static point of view located in the here and now” (Rendell, 2010, 18).

Anna Ulrikke Andersen holds a MA degree in Architectural History from the Bartlett School of Architecture and a BA in Art History and Media Studies from the University of Oslo. In her PhD in Architectural Design, she is using filmmaking as a practice led methodology to investigate windows in the architectural theory of Christian Norberg-Schulz.

Her interest in ways in which creative practice and academic thinking can meet and inform each other is a recurrent theme in her work. Questions she has encountered at the university has been explored through the production of films, like The Spirit of the [Natural] Place (2013) and Pies i Kot (2009), as a participating artist in the Norwegian artist coalition Smitte, or through the production of Circus Universe, a comic book in four issues (2008–2011).