The UCL Institute of Archaeology History of Archaeology Research Network brings together a critical evaluation, examination and presentation of archival material and object collections.

The history of archaeology is a growing area of research not least because of the increased importance of digitising collections and making them publicly accessible. There are a series of current developments in this field, but the UCL Institute of Archaeology is particularly well placed to develop research because of the depth and breadth of its archival holdings and collections.

The Institute is one of the earliest archaeology training institutions in Britain, and a key player in the development of archaeology as a profession. Its past has fixed its current position as the largest and one of most well-known archaeology departments in the world. The Institute's focus on archaeology, museum studies and cultural heritage will add multiple perspectives to research in the history of archaeology, and facilitate contacts with many different cultural institutions, including museums, university archives and learned societies.

The IoA History of Archaeology Research Network comprises a strong inter-disciplinary element; including strong links to the history of science, art and museum collections, social and cultural history, architecture and tourism. It also provides a valuable route for public access to archaeology, enhancing the quality of archaeology's impact on the public.

Its long-term aims are to:

The potential for the history of archaeology to contribute to public awareness of and appreciation for archaeology is enormous. The Institute's collections are partially the result of generations of archaeologists leaving personal and fieldwork related material to the Institute specifically because of its place at the forefront of archaeological research.

In order to capitalise on this, and highlight the breadth and depth of the Institute's history, its collections and archives are the foundation of this new research network. Its goal is to develop a publicly accessible database of its collections, both material and documentary, showcasing the Institute's facilities, research, staff and students while revealing archaeology's role within a wider social, economic and political historical context. 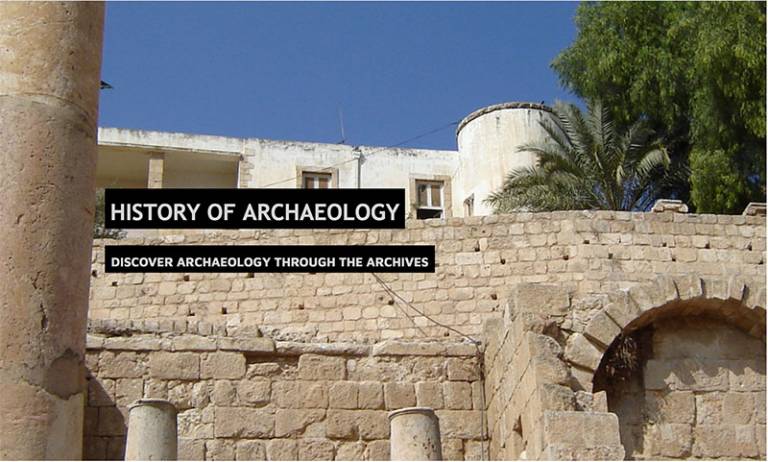 UCL Centre for Humanities Interdisciplinary Research Projects (CHIRP): Award of a Small Research Grant 2013-14  for a project entitled Filming Antiquity.
The project will involve the digitisation of excavation films currently held in the UCL Institute of Archaeology, an interdisciplinary symposium with screenings of a sample of the digitised films and discussion and the construction of an online archive of these films and supporting materials.