Overview of the EPICure studies

This pages gives an overall picture of survival and later health problems in extremely preterm children to summarise all of the EPICure studies up to date in 2011. 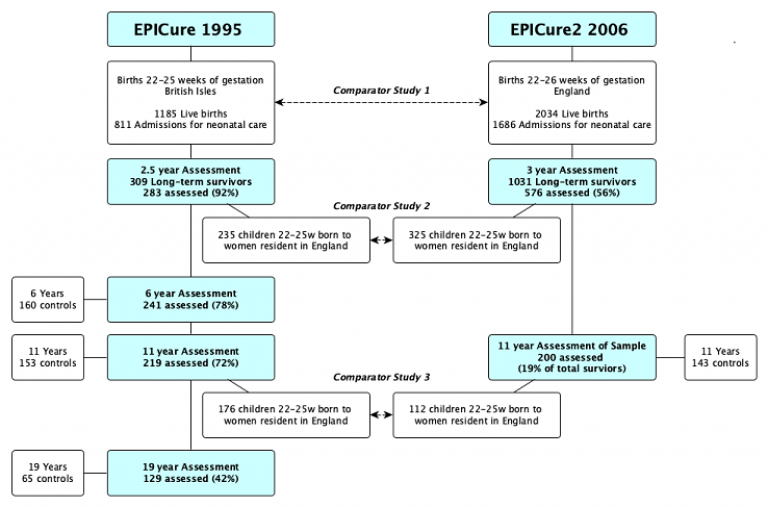 Survival after birth before 27 weeks of gestation:

As neonatal care has improved the chances of survival have improved but for the smallest children there has always been a point beyond which survival is unlikely.  Doctors monitor survival at very low gestations because we need to give parents accurate information about a group of babies for whom the risks are high.

In the first EPICure study we showed that survival was unusual before 24 weeks in the UK in 1995.  What we did not know at the time was whether there had been a decision to provide active care or whether a decision had been made that the risks were too high and the doctors and midwives would simply make the baby comfortable after birth and not intervene.  Some parents quite rightly prefer this option.

In the second EPICure study in 2006 we had much more information on whether the baby had a heart beat when labour or delivery commenced, what decisions had been made about active care and many more babies were transferred before they were born with their mother to specialist units for care.  We can be much more specific in our information to support counselling because of this.
Survival for births of 24 and 25 weeks has risen significantly between 1995 and 2006 as is shown in the graph – we have also indicated where a decision was made for comfort (i.e. no active care) rather than intended care.  Babies born at 26 weeks of gestation have higher survival still. 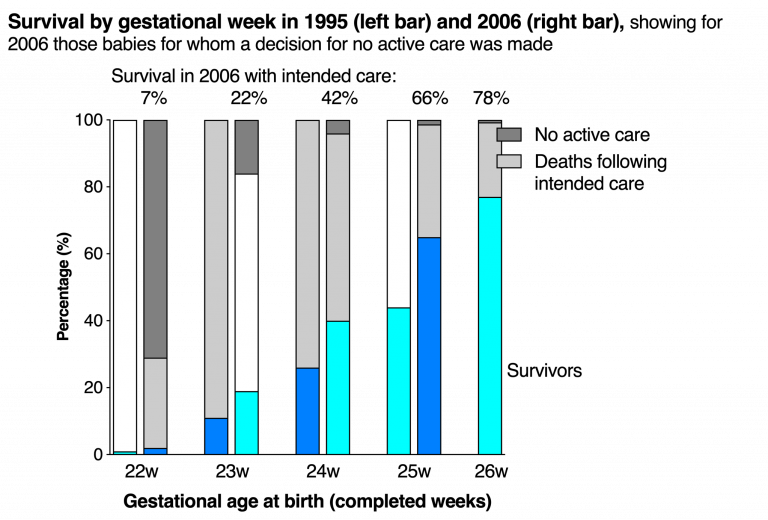 These are the risks for babies at birth if they are born alive.  Once babies are admitted to the neonatal unit their chances of survival are higher and we can combine with the most recent data from 2016 to show that survival has continued to increase since EPICure2 (see Figure below). 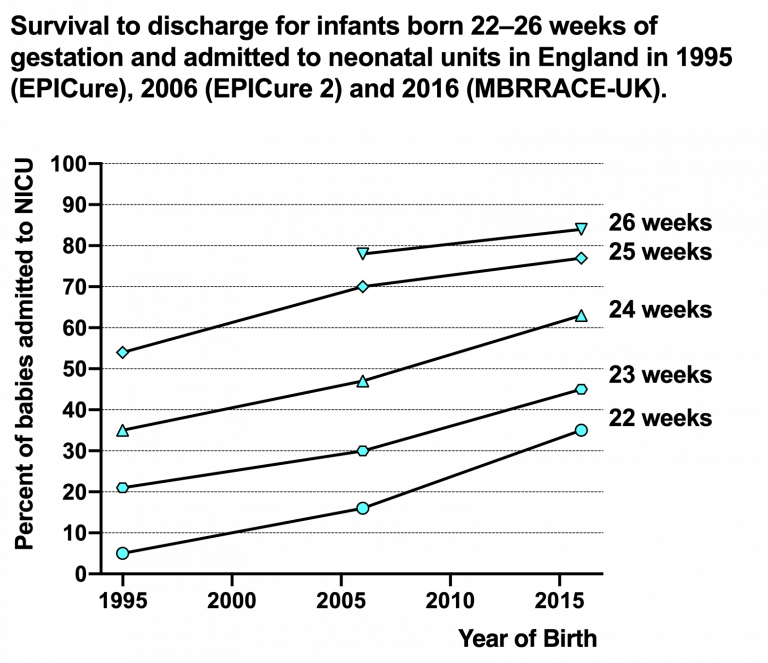 Most babies die in the first week after birth and therefore babies who are alive at seven days have approximately doubled chances of survival as relatively few babies die after this age, although some unfortunately do.

There are a few babies who die later on but these are the exception - only 10 in over 1000 babies discharged home died before 3 years of age in 2006 – and these babies usually have other associated problems.

Now we have results from EPICure 2 we can describe the overall outcome from different stages in the pregnancy and birth process from the start of labour or delivery, through birth to admission for neonatal care, as shown in the table below.   In some hospitals, survival may be different from the figures shown but the chances of a outcome without severe or moderate disability are likely to be very similar. The data should be interpreted with current survival data. 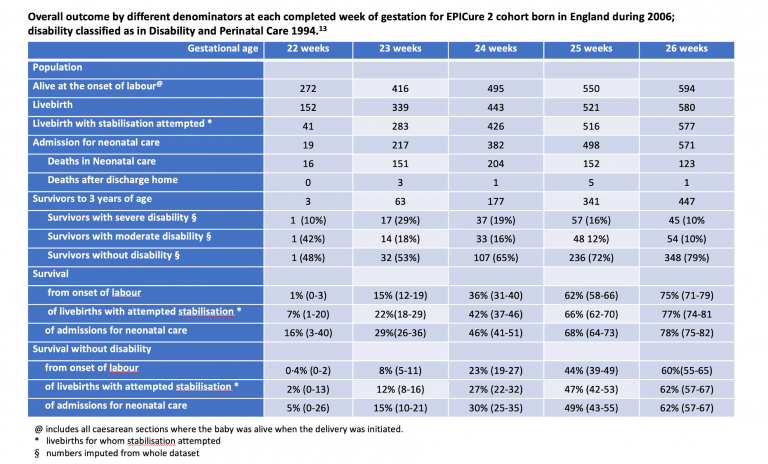 Providing up to date information for parents about early outcomes is challenging as the data change all the time. However, the recent publication by BAPM was developed by parents and professionals together to give a balanced view of this difficult area. This is publicly available here together with a useful infographic summarising risk here. Data from EPICure must be read in conjunction with these papers to provide a neutral and parent-oriented view of the outcome for this vulnerable group of babies.

The main challenges for children born extremely preterm growing up:

Children born at extremely low gestational ages face a range of risks as they grow up.  Not all babies have problems and for half of the children there are no health problems or only minor problems (for example, special needs at school to help with classwork, squints and need to wear glasses).

Although the chances of cerebral palsy at around 20% are relatively high compared to the normal population (2-4 per 1000 births), most children with cerebral palsy have mild associated disability and attend mainstream school, with only 7% have severe associated problems.

A large proportion of children will need some help at school – around 2 in 3 in our study, although the proportion who go to special schools is only around 1 in 8.  The main problems seem to be associated with attention in the classroom (not usually hyperactivity), and from other studies problems with short-term or working memory and slow processing of information – hence the finding in our 6 year study that it is better to break tasks into sequential steps rather than all together in the classroom.

Overall behaviour problems are found in just over 1 in 4 children. Inattention remains the commonest problem for extremely preterm children, and some children get anxious and worried with this.  Some children show symptoms like autism but it is very different from the autism we see in non-preterm children and often occurs with other disabilities.  Children who grow up without serious health problems rarely develop major behavioural problems in our experience.

Extremely preterm children tend to have more chestiness than their full term classmates which is related to asthma, and children take more medicines to help prevent wheeze and cough.  This seems to be because the lungs have difficulty in reaching their full development after such early births.  Major illness with chest problems decreases as the child grows up but the risks stay through to adult life.

Although growth is slow up to six years, we have shown that height and weight are showing some catch up over later childhood and that most extremely preterm children are going into puberty at the same time as their classmates. Final height as adults is a little reduced compared to their peers but there has been some catch up in terms of weight at 19 years.

More details on all of these can be found in the publications.