UCL Urban Laboratory has published the eighth issue in the Urban Pamphleteer series, bringing together voices who are pushing forward debate on the role of skateboarding in effecting urban and social change. 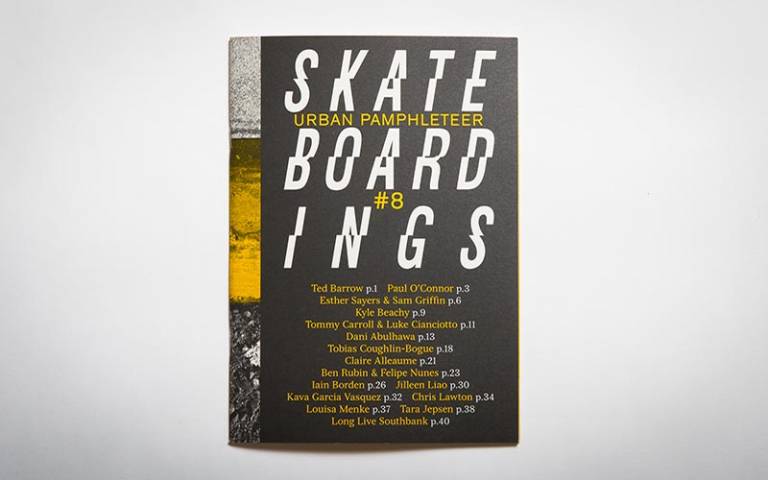 Urban Pamphleteer is a publication series produced in collaboration between UCL Urban Laboratory and Central Saint Martins, University of the Arts London. Each issue addresses a theme and set of questions that have recently surfaced in urban debate, framing contemporary challenges historically, and bringing together a diversity of text and visual contributions, written in an accessible way, to address audiences who are affected by the topics raised and/or are in a position to enact change.

Urban Pamphleteer #8: Skateboardings gathers together activists, artists, and educators who show nuance on the effect skateboarding can have to positively influence social and urban change. The lived experiences of skateboarders of colour, of diverse genders and sexualities, of different mobilities and class backgrounds, intersect with the politics of their everyday lives and negotiations with public and private space. With this in mind, the issue asks: What does a skateable space look and feel like, and for whom? Does skateboarding benefit from accessible urban design, and if so, why? Can skateboarders be good partners for cities?

The issue was guest edited by Thomas Callan-Riley and Sander Hölsgens, with series editors Ben Campkin and Rebecca Ross, and design by Guglielmo Rossi. The print edition will be launced and distributed later in 2020.