Following the postponement of the Get Together event last year due to the coronavirus pandemic, the Queen Elizabeth Olympic Park welcomed back over 3,000 local people keen to take advantage of free taster sessions at Timber Lodge on Sunday 8 August. 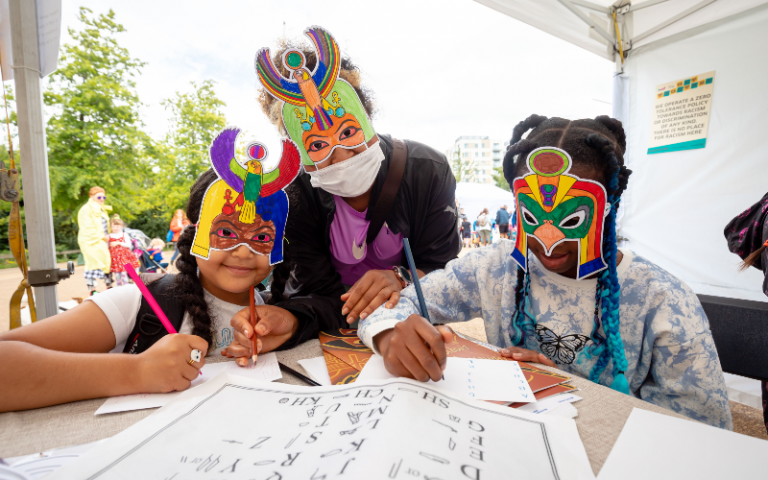 The London Legacy Development Corporation (LLDC) put on the event with support from its East Bank partners, including the BBC, Sadler’s Wells, UAL’s London College of Fashion, University College London (UCL) and the V&A, as well as Foundation for Future London.

Visitors discovered Ancient Sudan with the help of UCL who introduced participants to the Petrie Museum and its objects.

Through activities co-developed with five UCL Masters’ students, the UCL team demonstrated how to play mancala – an ancient board game of strategy played with dried beans – and provided the more creative types with an opportunity to take home a souvenir by helping them design their own mask of King Aspelta, Queen Madiken or the sun-God Ra.

In addition to handling objects through 3D printed replicas of objects from the Petrie Museum, the participants also learnt to write their own name in Hieroglyphs; the students even designed a ‘selfie-frame’ which had a hidden message in hieroglyphs that older children could work out.

Taster sessions for children also included the V&A’s Build Your Own City and Let Your Imagination Run Wild while UAL’s offering of designing and making a collage and tote bag was also a big hit.

There was also a nod to the Park’s east London roots with those wanting to perform themselves given the chance to map out their version of the East End on a teacup as well as playing a card game that helped those who took part brush up on their rhyming slang.

Despite the Government’s easing of Covid restrictions last month, this year’s event was scaled down from the larger gathering seen in previous years so that those visiting would feel more comfortable.

The aim next year is for the event to accommodate a much higher number so even more people can enjoy an even wider variety of exciting and engaging activities on the Park.