Iain Borden, Professor of Architecture & Urban Culture at the Bartlett School of Architecture, UCL, is one of the world’s leading academics of skateboarding. Here he celebrates the successful start of the City Mill Skate initiative around the development of the UCL East campus. 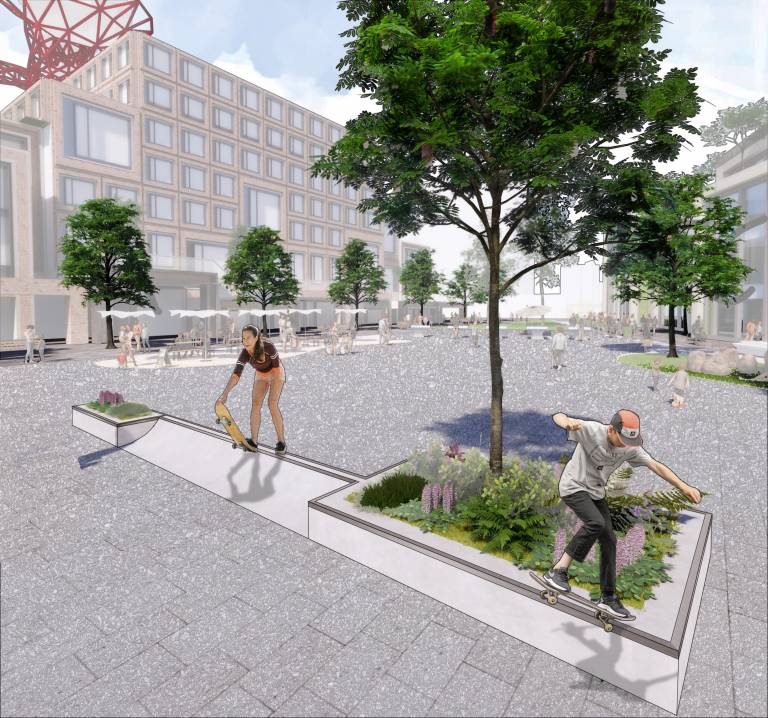 When we think of our new UCL East development, we think of our students, staff, programmes and research, and the wonderful buildings that will house them. But what of the spaces in-between these buildings, and what of the communities who live nearby – how will our new university realm be open to everyone, and how can we promote diversity and inclusion? In short, how can we start to break down the university walls and help make UCL East into great public space?

These are difficult questions, and there are no simple answers. But one possible clue is coming from what might at first seem an unlikely source: skateboarding.

Ever since skateboarding’s origins in the 1960s, skateboarders have been enthusiastic users of public spaces, turning everyday pavements, ledges and planters into objects of physical exhilaration and personal joy. Today there are around 750,000 skaters in the UK, and they are a pretty diverse bunch – skateboarding often attracts far more varied participants than most other physical activities. Head to a famous skate space, such as the Undercroft skate space at London’s Southbank Centre, and you will see riders of all ages, ethnicities, backgrounds and abilities, all riding in the same space together. Furthermore, this group is strongly associated with creativity, with many photographers, film-makers, writers, poets, graphic designers and musicians springing out of the skate scene.

UCL has already engaged with the skate community in numerous ways. For example, last year, we worked with the Smithsonian Institute to produce the Innoskate one day festival of skateboarding and creativity. Held in the open courtyard outside the UCL’s Here East building, Innoskate attracted hundreds of riders and their families. One notable feature of Innoskate was the substantial participation of “adaptive” riders – such as skateboarders who are blind or have prosthetic limbs, or who use special WCMX wheelchairs. Specially designed and fabricated ramps were created by Bedir Bakar, a student on the Bartlett School of Architecture’s MArch Design for Manufacture programme.

In 2018, two PhD candidates from the Bartlett School of Architecture, Thom Callan-Riley and Sander Hölsgens, inaugurated the Pushing Boarders event, an annual exploration of skateboarding and diversity involving riders, academics, city planners, NGOs, designers and activists. A second event was held in Malmö in 2019, and a third is on the way.

In my book Skateboarding and the City (Bloomsbury 2019), I provide a comprehensive account of its history, politics and contemporary practices.

So what are we doing to engage with these issues, and how are we building on the skate-related research and community-oriented projects that have already been undertaken? How might all of this feed into UCL East? 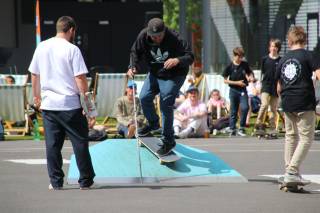 For over a year now, City Mill Skate has been building a diverse community of skateboarders around the UCL East site, and has covered everything from skate lessons, design and making workshops, DIY build test projects and more. During the pandemic lockdown, City Mill Skate revised its face-to-face workshops into a series of make-at-home model making kits, where skaters of all ages and abilities imagined what they saw as a great “skate dot” – a small piece of the urban realm that can be great to skate and – equally importantly – be integrated into the landscape. A short film, What is City Mill Skate?, explains it all, and a vibrant Instagram account helps link it all together.

Funded by UCL East Public Art Programme, and with direction from Sam Wilkinson (UCL Public Art) and myself at UCL Bartlett, City Mill Skate is being led by two people: Dr Esther Sayers, Head of the MA Arts and Learning programme at Goldsmiths College, and who has recently taken up skateboarding herself; and Sam Griffin, a graduate of the UCL Slade School of Fine Art, and a long-time skater, activist, skatespot builder and curator. Both are local East London residents, and have strong connections with the communities in and around UCL East.

Through City Mill Skate, we hope to make a number of modest yet significant alterations to the design of the public spaces around the UCL East buildings. This way, we believe that skateboarding, in its own unique way, will help make these spaces into even more enjoyable and welcoming places for everyone, whether from UCL or beyond.

There are also potential benefits even further afield. While a handful of cities – such as Melbourne, Seattle, Malmö, Nottingham – have started to realise the enormous potential within skateboarding to help unlock and enrich our public spaces, too many cities, developers and building owners still remain cautious and uncertain. As perhaps they should, for up to now skateboarding has been largely confined to either purpose-built skateparks or has been seen as a transgressive interruption of everyday city spaces. But as these other cities and our pioneering skate-related work at UCL have all shown, things don’t have to be so divisive or exclusive. If we are willing to be bold, creative and disruptive – qualities which UCL has in abundance – it is possible to build inclusive public realms, and with skateboarding being a dynamic contributor to this process.

At UCL East, and with City Mill Skate, we have a chance to put this into action. Not just for ourselves and our neighbouring communities, but to show others how this might be done. Indeed, the national and international governing bodies for skateboarding – Skateboarding GB and World Skate – have recently been talking to us about this project, and are very keen to join us on our journey. For now, City Mill Skate is highly local, but maybe, just maybe, might turn out to be very global.