From 2015 onwards, we ran a series of consultations open to UCL staff, UCL students, the general public, and east London communities. Over 4,100 people were consulted across pop-up road shows and exhibitions at UCL and in various locations across five east London neighbourhoods.

The early work on the UCL East academic vision happened in tandem with public consultations on the proposed Masterplan for UCL East.

Following the submission and validation of our three 'Reserved Matters' planning applications, we provided a final public consultation update by email:

The UCL East programme is committed to making decisions through a bottom up process. It regularly consults with members of UCL’s leadership team, the academic community, faculty teams and the staff and student population to consult on the business case, academic vision and wider design plans.

The process to develop the academic vision for the campus was initially led by Steve Caddick, then Vice-Provost (Enterprise), and afterwards by Professor David Price, UCL Vice-Provost (Research). In 2015, UCL staff, across all departments and faculties, were asked to bid for research, teaching, and public engagement space for Phase 1 of the campus. Over 60 expressions of interests were submitted.

These ideas were developed, consolidated and subjected to rigorous peer review in 2015 and early 2016. The shortlisted proposals were then discussed in an all-staff consultation in March 2016.
These proposals have subsequently been grounded and led by dedicated Faculty Leads, with contribution from over 100 academic staff from across UCL. We now have a set of exciting and innovative academic activities for Phase 1, led by, and bringing together, academic staff from across the Faculties of Arts & Humanities, Built Environment, Engineering Sciences, Life Sciences, Population Health Sciences, Social & Historical Sciences and the Institute of Education. You can find further information about the academic activities on the Academic Vision page.

Since 2016, under the leadership of the Academic Director, and with support from the UCL East programme team, representatives from these faculties have worked together to further develop a shared academic vision for the campus, as well as a set of common themes that unify and integrate the proposed activities.
As we continue to plan for the campus, and develop our ideas in more detail, we continue to consult with UCL staff, students, our partners, and members of the local community.

The Academic Leadership Group was set up in March 2016, bringing together the academic leads of all of the proposed activities as part of the final academic scenario for UCL East. It met roughly monthly from March until autumn to work up an integrated academic vision for the campus.

On 17 December 2018, academics whose activities will be based at Pool Street West attended a workshop, also attended by colleagues from UCL Planning, Communications and Marketing and UCL Culture, to further develop the vision for the Future Living Institute.

UCL East has presented to the Academic Board a number of times including presenting to both the Board and the Governance Committee of the Board in 2016, attending a Special Academic Board Meeting on UCL East in 2017 and sharing information via the Provost in 2018. From 29 November 2018 UCL East held monthly drop in sessions for Academic Board members, along with an email inbox to log and respond to queries raised by members.

UCL East Steering Group is a widely-consultative assurance group which consults on aspects relevant to the entire programme. The Steering Group has met roughly every 6 weeks since December 2016. Steering Group see the approved minutes from UCL East Executive meetings.

The Education Task Group, established in September 2016, works to develop the educational offerings at UCL East. It ensures the UCL East Academic Vision is embedded into all educational offerings. Since January 2019, the group has been scrutinising the academic programme proposals going into the Marshgate and Pool Street West buildings.

Established in January 2017, the Critical Friends Group provides UCL East with a broad range of expertise from across UCL, including (but not limited to): architecture, space planning, engineering, landscape, biodiversity, sustainability, etc. It also includes potential users from the different faculties involved in UCL East.

The UCL East Critical Friend Group has been responsible for providing engagement and scrutiny for the design aspects of the Pool Street West and Marshgate build in terms of both shell & core and fit-out designs. The group, comprised of subject matter experts in the field and other interested parties from across the university, advises on key design choices.

If you would like details of the dates UCL East presented to these bodies, please contact the UCL East programme office.

Faculty communications, led by our academic leads, from 2016

As well as attending UCL East governance meetings, the Academic Leads have co-ordinated, led and spoken at a regular series of meetings to ensure that their faculties are involved and able to provide sufficient input and challenge.

If you would like details of the meetings our leads have spoken at within their faculties, please contact the UCL East programme office.

Connecting with the wider UCL community

A number of events and presentations have been held to connect with people from across UCL.

In October 2016 we established the UCL East Engagement Network (formerly known as UCL East Public Engagement Task Force) with representation of practitioners from across UCL. The group meets termly.

In addition, we have held a number of UCL East roadshows, workshops and showcase events. These have included user group sessions and away days with those involved in Pool Street West, roadshows for faculties, the Students Union and central teams such as UCL Estates and the Planning Team. All staff were invited to attend the East Bank Launch Event in June 2018 at which the Mayor of London presented and at the UCL East Showcase Event in June of the previous year, 268 people were invited, internal and external to UCL, and 7 UCL Faculties participated in the activities.

We value the input of students to the programme and have sought to involve the Student Sabbatical Officers in our process. We have done this through:

UCL East regularly communicates through all-staff and all-student channels, to ensure everyone is kept informed about the programme’s progress.

Early communications about the programme were covered in news articles, supported by detailed yearly updates, we have linked to these below:

Since 2014 we have been featured in the all-staff newsletter (TheWeek@UCL) and all-student newsletter (MyUCL). These features range from advertising the different parts of the consultation process, to providing the results of these consultations, requesting feedback, giving updates on progress and providing the latest news. We have had 13 articles in TheWeek@UCL from September 2017-September 2018, including:

UCL East will be an open, accessible and engaged university campus. To start a conversation with us and find out more, contact our team at: ucleast@ucl.ac.uk. 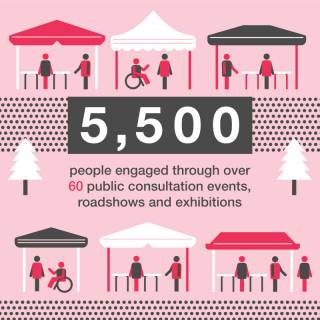