Neil Roberts describes how he and colleagues in the Ear Institute created a series of interactive demonstration videos that help students understand clinical procedures. 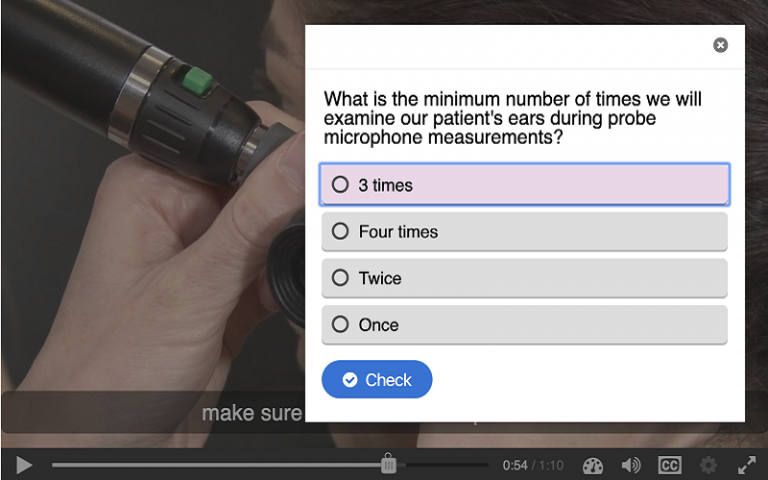 Students on the Audiological Science with Clinical Practice MSc need to show competency in practical, clinical areas based on the British Society of Audiology’s (BSA) requirements for clinical practice.

Here, they explain how and why they went about it:

We created a series of video demonstrations of how to perform various clinical audiology techniques, for example, how to use clinical equipment to perform hearing-related tests in patient treatment.

We used the interactive features of the H5P Moodle activity to include pop up quizzes, summaries, notifications, true/false statements and images with hotspots in the videos. Some quizzes were optional, others you had to complete to continue watching the video. H5P Interactive Activities can be made within Moodle by anyone who is enrolled as a Course Administrator, Leader or Tutor on a course.

Students watch the videos and use them to complete a learning activity, such as writing out a patient instruction script, before attending the practical sessions. They then build on this learning in the practical sessions, by peer reviewing each other’s scripts in class before carrying out the procedure themselves.

Our videos show two demonstration types: Taking an Ear Impression and Taking Probe Microphone Measurements.  Rather than having one long video, we broke each one down into bite-size sections – one for each part of the procedure. Each of the videos had 7-10 interactive activities within them and they range from 50 seconds to six minutes in length.

The interactive elements of the videos are highly valuable as they reinforce the students’ knowledge about the key stages of the procedure, and provide an essential part of the scaffold necessary for supporting learning as students move between understanding the theory and performing a clinical procedure on real people. “

How we created the videos

Knowing what the H5P activity had to offer shaped how we created the videos from the the outset. Because we could add interactions, we didn’t need to rely on voiceover to explain everything – we could present this information in a more engaging way. For example, where previously we would have run through a list of required equipment in the video, we instead created an image with clickable hotspots. Students could then click on an item to learn all about it.

The tool wasn’t too difficult to learn and, being based in Moodle, we could develop the videos from anywhere. We set to work!

The hardest part was agreeing on a date when we were all available for filming! We settled on recording each set of videos over two afternoons in late summer. It took just 30 minutes to set up lighting, microphones and two cameras. We used Lecturecast Personal Capture to store the recordings. A few follow-up photographs were needed for the image hotspots activity. 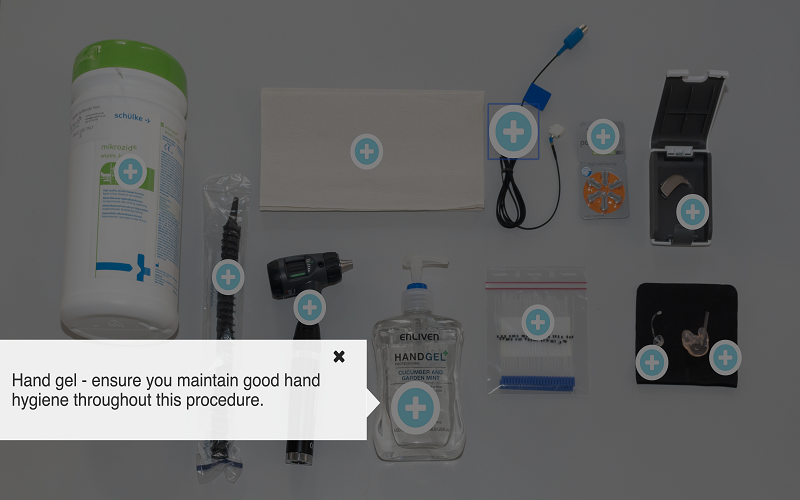 I sat with Hannah to showcase the type of activities available and how best to use them. Hannah then took around 20 minutes per activity to select and add the interactions that best suited the content.

We uploaded and tested the final videos H5P in October.  We released the videos to students in the week before their practical sessions, so they had time to view the demos before they attempted it themselves.

Impact of the videos

Students have so far reported that they find the videos very useful. It was heartening to see from the statistics that the majority of students had viewed the material. Not just that, but those who viewed them, watched all of the videos within the set. Many videos were viewed more than once so students were coming back to them again. Hannah has reported:

The videos have meant that students are prepared before they attend practical sessions and so I do not need to do live demonstrations in class. This means that the students are able to spend all their allocated lab time practicing the skills themselves.

Staff are also more confident with using new learning technologies. Hannah reported that the more she used the H5P tool, the more creatively she used the interactions and improved the resources for students.

We plan to get more targeted feedback from students on what they found worked well and where any improvements could be made. The videos that had the most repeated views may be the scenarios that students have the most difficulty with, but we want to better understand this.

We have three more sets of videos in the pipeline to be released in the new term  – all using the H5P tool’s features. They are a fantastic teaching and learning resource.

If you want to know more about using H5P to create interactive learning resources, you can: