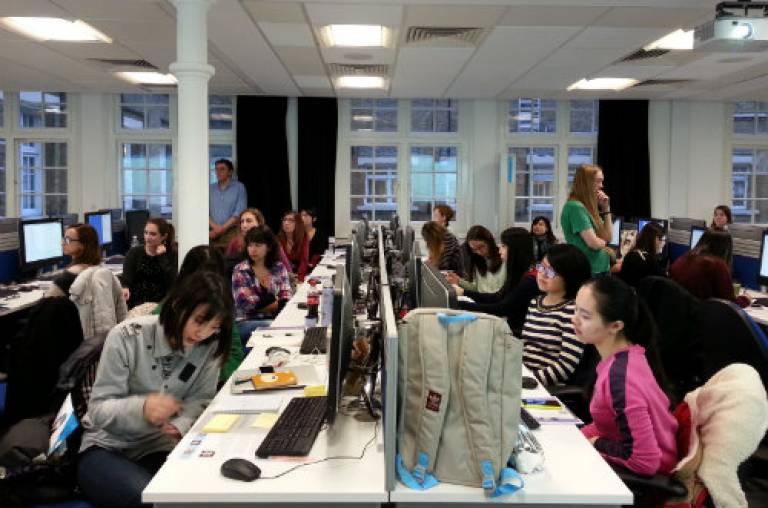 UCL Centre for Translation Studies (CenTraS) ran an event for 36 postgraduate translation studies students, all new to editing Wikipedia, to learn how to contribute to the online encyclopedia anyone can edit.

The event was jointly organised by

In this account I’ll focus on practicalities, which I hope will help anybody thinking of running one themselves.

For an event like this the choice of subject needs to be something that is both underrepresented and that participants can relate to. Given that the people in this case were almost all women and enrolled on a programme with a technical and medical focus, women’s health was a good choice.

To learn the concepts, the editing basics, think through some edits and actually make them in the article, Wikimedia recommend a minimum of 4 hours.

Our translatathon was organised around the students’ timetables between 2 - 7pm (five hours went incredibly fast) divided between the basics of Wikipedia editing, choosing an article, a presentation on why translating Wikipedia matters, and a final round-up.

Students were asked to complete an hour’s self-paced training from Wikipedia on the basics of editing, but were reassured that if they couldn’t, that wouldn’t be a problem.

After a discussion about encyclopedias, Roberta introduced the basics of Wikipedia editing.

She contrasted Wikipedia’s article pages with their respective Talk Pages (where editors discuss the content of the article), and each user’s own User Page (personal, no need for neutrality or referencing).

The first words students wrote on Wikipedia were “I am learning to edit Wikipedia” on their own User Pages. This isn’t just a random sentence – it signals to other Wikipedians who may be watching out for disruptive acts or unusual practices that the author is inexperienced and should be treated hospitably.

Another helpful thing for new Wikipedians to do on their User Page is to add the text {{new user bar}} and then save – this template then presents a list of links to help and general orientation which the user can remove once they know the ropes.

There are some particular practices for translating Wikipedia.

For example any Wiki user should include a brief edit summary before they save, but for translation this is the place to cite the original article. “Translated from [[:en:title of article]]” is the customary way of referencing.

The Talk Page (something every article has, used by editors to inform each other about plans and discuss dilemmas) is useful for noting sources, too. By the end of that session, students knew how to get into edit mode, how to make a link, how to reference, and some Wikipedia etiquette.

Next students identified articles to work on from the English Women’s Health category.

They checked whether the article existed in their target language Wikipedia, and whether it could helpfully be developed through translation. Then, to avoid working on the mainspace (live article), they copied  one section of the English article into their Sandbox (a sub page of a user’s personal page which can be used for for drafting and testing).

It soon became clear that you need to work in the Sandbox of your target language Wikipedia so that when you make internal links in the usual way (surrounding that page’s title in double brackets) it will refer to that Wikipedia, rather than the English one (not all Wikipedias have a sandbox but it’s easy to create a bespoke one from your User Page by appending a forward slash (/) and the word Sandbox).

Then, to avoid students inadvertently overwriting each others’ edits, the 30 or so students working in Chinese used a shared document to note which article and section they were working on (again, if we’d had a Wikimedia event page we’d have used that – but instead we used a Google Doc).

It’s usual for Wikimedia editathons to include a presentation from a subject expert about the topic of the day. Ours was from Fabian Tompsett who introduced the 288  Wikipedias with reference to the article on ebola. Thanks to the work of Wikiproject Medicine, the ebola article emerged as a trusted source during the 2014 outbreak, with translation continuing to play a vital role.

Then we returned to editing. A number of translation-related queries were discussed, such as which were the best resources to find reliable medical terminology or how to deal with the translation of bibliographical references in across languages.

There was marked trepidation when the time came to move the work from the Sandbox to the mainspace, because students were worried that their work wasn’t perfect. The Wikimedia volunteers reassured them that it’s in the nature of a wiki is for articles to start small and be refined over time, often by several different authors. Again, explaining works in progress is where the Talk Page and Edit Summary come in.

Finally, Wikipedia articles each have a sidebar listing its counterparts in other languages, so the last thing we did was to make sure this included links to and from the new translated material.

I chatted with some of the students to find out what they made of the translatathon.

One told me that she uses Wikipedia a lot when translating – particularly comparing the English version with the version in her target language – and that she wanted to “give something back”. She also mentioned that it was exciting to be able to publish something on such a prominent site. Being familiar with HTML, she found editing very straightforward. But as one of the students who had completed the self-paced training in advance she had found herself at a loose end during the first part of the session, and suggested providing more advanced training for people in her position.

Another student who used Wikipedia very frequently was conscious that many of the articles in her language were inadequate and was interested in making improvements. Even as a self-described non-technical user she found Wikipedia editing straightforward. The one thing she said she’d like to change about the translatathon was more clarity about exactly what students would achieve at the end (for example “at least one paragraph translated”).

A third student told me she felt very motivated to practice translation on Wikipedia in the future. As well as the realisation that some of the women’s health articles are underdeveloped on Chinese Wikipedia, she was excited about writing on such a visible site and inspired that people in China would be be able to read her work.

The Wikimedian volunteers were great. Contributing on the day with suggestions, one-to-one assistance and the occasional bit of troubleshooting were:

Wikimedia evaluated the event with a feedback questionnaire.

Wikimedia are supporting a working group on teaching translation through Wikipedia editing.