Teaching Greek for Beginners with 'A Night at the Petrie Museum'

The two-hour session was part of the ‘Greek for Beginners A’ module and aimed to combine academic learning with innovative methodologies and object-based learning. 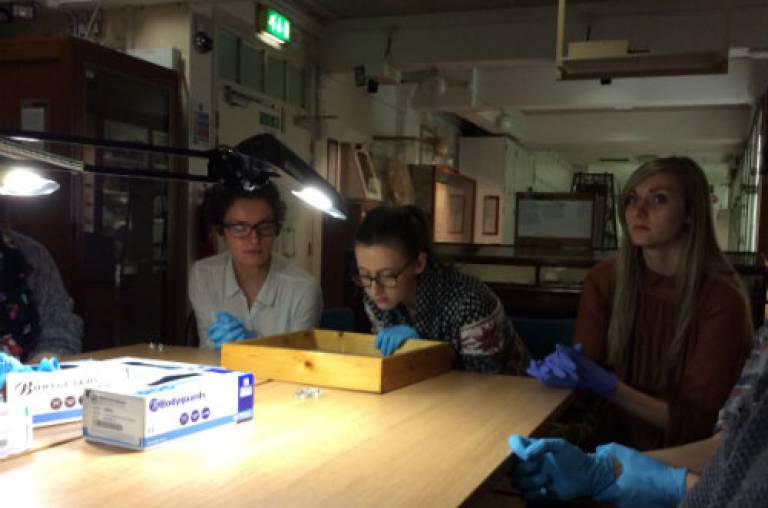 During a visit to the Petrie Museum our students had the chance to apply their knowledge by transcribing real ancient artefacts from Roman-Egypt, while at the same time being introduced to a specialist area of research.

The ‘Night at the Petrie Museum’ was a special class held by the Department of Greek and Latin which aimed to introduce and promote object-based learning as an innovative methodology for teaching ancient languages.

In this special class we also had the chance to use the app ‘Tour of the Nile’ which allowed students to inspect artefacts from the collection in augmented-reality (3D) with the aid of iPads.

The two-hour session was organised by Dr Antony Makrinos with the help of PhD students Danae Bafa and Tzu-I Liao, to take place at the Petrie Museum.

The experience would be unique since it transferred the class outside the borders of the classroom, thus allowing the students to explore the material culture of Roman Egypt and to apply their knowledge of Greek through reading ancient artefacts.

Ten objects were carefully selected and presented (from amongst a collection of over 1,000) ranging from mummy labels, to stamps and ostraca, as well as school-papyri containing grammatical phenomena, already covered in our classes.

Studying these objects, our students felt closer to their ancient predecessors and realised they had more learning habits in common than previously thought.

They were also able to decipher some challenging handwritings and even detect some ancient spelling errors.

Afterwards, the students were very excited to use the augmented-reality app of ‘Tour of the Nile’ which was created by the Museum in order to allow a virtual manipulation of two dimensional artefacts of its collection by transforming them into 3D.

After the visit was completed, student feedback showed how the session significantly boosted their confidence as alongside their peers they were able to transcribe artefacts on the spot after only three months of classes.

Also, the students stressed that they loved the blend of classics and technology and that the visit had created an incentive for them to pursue further studies in a related subject and to even apply for volunteering at the museum. Overall, our students were really engaged with this special class and all expressed a hope to attend a similar event in the future.

We hope that the ‘Night at the Petrie Museum’ and object-based learning become a tradition not just for Beginners’ Greek classes, but also for other modules that could exploit UCL collections. After all, what could be more fulfilling for our students than actually experiencing their studies by bringing to life the ancient world?