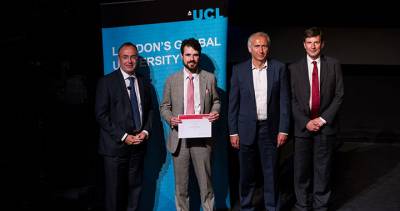 In March 2014, after an appearance on Newsnight to discuss developments in the 'Big Bang' story, Dr Hiranya Peiris and her colleague, Honorary Research Associate Dr Maggie Ederin-Pocock, were the subject of a Daily Mail column suggesting that both UCL scientists were selected based on their gender and race.

This was because, the column explained, "Newsnight's Guardian-trained editor, Ian Katz, is keen on diversity".

In response to the prejudices expressed in the Daily Mail, the Media Relations team organised a co-ordinated reply between UCL Physics & Astronomy and senior UCL colleagues upholding UCL's commitment to mutual respect.

Their actions sent a clear message throughout the university, the scientific community and beyond that UCL is an inclusive environment that defends staff members' rights to respect across all platforms and to the highest level.

The rapid response organised by UCL Media Relations resulted in a far wider range of media coverage criticising the attitude taken by the Daily Mail. In particular, the scientific community were resoundingly positive about UCL's actions in supporting its researchers in the public eye.

Dr Peiris's discussion of the incident and its consequences is available on THE website.

Her responsibilities include handling admissions and boards of examiners, reporting for 482 students and optimising UCL quality assurance processes for 25 programmes of study.

Over the years, Ms Gosai has continually exceeded expectations in all areas of work.

She led an internal review of key areas of administrative support services within the EDI and has implemented significant improvements to its processes for admissions, assessments and examinations.

Ms Gosai also consistently provides invaluable support for the EDI's administrative staff, including those for whom she is not directly responsible.

She was also a central figure in leading a long-term internal review to identify issues with the quality of students' results data and has since assisted with the processes that followed this inquiry.

Not only does Ms Gosai ensure that the ever-changing goals of the EDI are met efficiently, but is regarded by her colleagues and students as always doing this in an open, friendly and mutually supportive manner.

In June 2014, a team of nine working within UCL Careers debuted a new programme for the pilot Employability Global Citizenship Summer School.

The programme is intended to increase the employability of final and penultimate year students while ensuring that Global Citizenship attributes are evident in the way that this is achieved.

The team worked together to produce a high quality event containing a large amount of new material, amounting to 40 workshops presented over the course of two weeks.

They also contacted and facilitated approximately 90 instances of employer engagement across the event.

This was entirely the result of the manner in which the team worked together, gathering ideas from all members regardless of seniority or professional background.

The team adapted to the different skill sets each staff member provided. For example, those who are more creative looked at course content alongside those who have more experience of what will work from a logistic point of view.

The success of this strategy was a particular achievement given the intense time restrictions under which they were working. Additionally, this event is the largest ever organised by UCL Careers.

Through weekly meetings, the core team reviewed work and recognised and celebrated the success of particular members. This proved to be an encouragement to staff and a useful way of identifying the progress of the project.

Details of the programme can be found on the Global Citizenship website.