Evaluating the first time use of 3D printing in a hospital setting for the preparation of personalised therapies for paediatric patients suffering from MSUD.

This work was partially supported by Innovate UK as part of the Medicines manufacturing round 2: challenge fund (15953). The Authors would also like to thank the Engineering and Physical Sciences Research Council (EPSRC) UK for their financial support (EP/L01646X).

Maple syrup urine disease (MSUD) is a rare metabolic disorder with a worldwide prevalence of 1 in every 185,000 live births. However, certain populations display a significant overexpression of the disorder where incidence is reported to be 1 in every 52,541 new-borns.

The first-line therapy for MSUD involves a strict dietary leucine restriction and oral supplementation of isoleucine and valine. The dose administered to patients requires strict tailoring according to age, weight and blood levels. In current clinical practice, however, practitioners still have to prepare extemporaneous formulations due to the lack of suitable oral treatments for MSUD.

Herein, we evaluate the first time use of 3D printing in a hospital setting for the preparation of personalised therapies with the aim of improving safety and acceptability to isoleucine supplementation in paediatric patients suffering from MSUD. 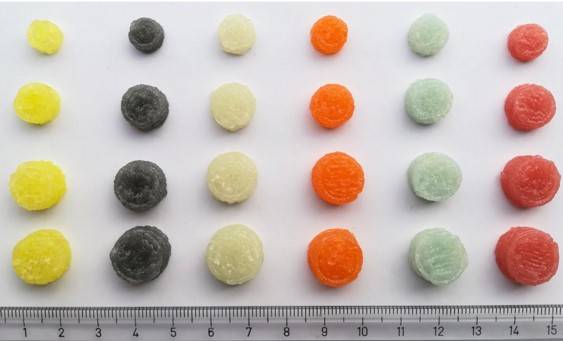 This investigation was a single-centre, prospective crossover experimental study. Four paediatric patients with MSUD (aged 3–16 years) were treated at the Clinic University Hospital in Santiago de Compostela, Spain which is a MSUD reference hospital in Europe. The primary objective was to evaluate isoleucine blood levels after six months of treatment with two types of formulations; conventional capsules prepared by manual compounding and personalised chewable formulations prepared by automated 3D printing.

A secondary investigation was to evaluate patient acceptability of 3D printed formulations prepared with different flavours and colours. Isoleucine blood levels in patients were well controlled using both types of formulations, however, the3D printed therapy showed mean levels closer to the target value and with less variability (200–400 μM).

The 3D printed formulations were well accepted by patients regarding flavour and colour. The study demonstrates for the first time that 3D printing offers a feasible, rapid and automated approach to prepare oral tailored-dose therapies in a hospital setting. 3D printing has shown to be an effective manufacturing technology in producing chewable isoleucine printlets as a treatment of MSUD with good acceptability.