Supporting MSSL's space instrumentation projects and carries out research and development into the underlying physics of detectors and instrument systems. 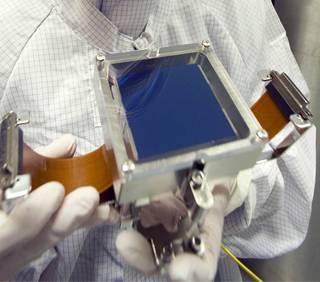 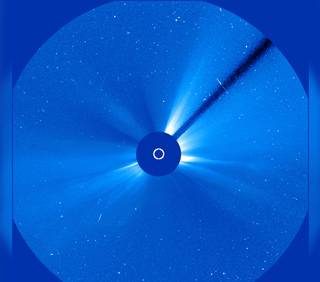 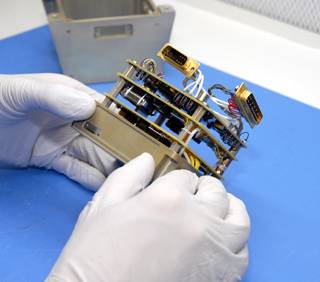 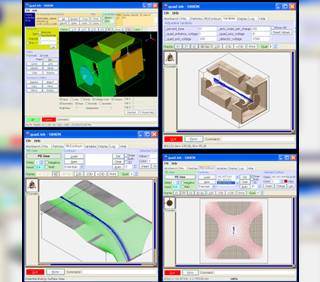 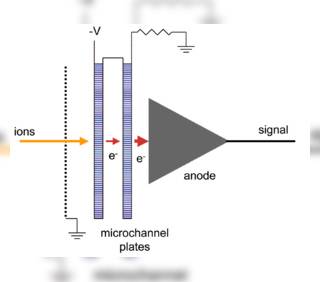 Direct detection of electrons with a CCD

CCDs (charge coupled devices) are the detectors more commonly found in digital cameras, but instead of light we have been using them to detect electrons.  The e2v CCD64 is a special back illuminated, ion-implanted CCD that was developed as an x-ray detector, but that we have found to be a suitable detector of electrons of low keV energies.  For more details see Direct detection of electrons with a CCD.

Direct detection of electrons with a APD

The trend of new generation electron detector design is still moving towards lighter, lower power, more compact, wider energy range and higher detection efficiency. As the core part of the instrument, the detector is being continuously improved. The traditional structure consists of an Analyser + CEM/MCP detector + charge sensitive pre-amplifier (e.g. A121). This is a mature and successful design. However the CEM/MCP detector requires very high voltage (> 1000V) to achieve high gain. Due to the limit of the high voltage (HV) power converter design, the converter is usually bulky and has a poor efficiency. The charge sensitive pre-amplifier is also very noise sensitive and adds very high requirement in readout electronics design.

To replace the CEM/MCP and remove or simplify the HV converter, various silicon detectors like CCDs and APDs (Avalanche Photo-Diodes) have been studied and tested. Recently the fast development of a MPPC (Multi-Pixel Photon Counter - also called Silicon Photo Multiplier) has attracted great interest. We're studying and testing the characteristics of a MPPC from Hamamatsu to verify its potential as a new silicon detector of electrons.

The high energy particles in the near-Earth environment can cause many problems - to spacecraft, communications and infrastructure.  These problems affect satellite electronics especially badly in the South Atlantic Anomaly, a region several hundred kilometres above the coastline near Brazil where the high-energy particles that make up the radiation belts travel particularly close to the Earth.

At MSSL, the detectors group is working on a small, low-resource design of a silicon-based instrument to detect these energetic particles (in the MeV energy range), capable of analysing the energies, direction and type of incident charged particles.  This will be optimised for low Earth orbit environments and could be used in future space weather applications.

As a demonstration of certain elements of this detector, a highly reduced version will be flown on UCLSat, a 2U CubeSat in the QB50 constellation.

The continued trend in plasma instrumentation is towards smaller, lower resource instruments with improved performance.  There is increasing demand for larger numbers of instruments for multi point magnetosphere/space weather measurements as well as for smallsat based missions. For these to be cost  effective/ possible they have to be small.

So far we have been simulating possible geometries in SIMION 8 (charged particle optics simulation software) and are prototyping a cylindrical geometry based design.  The prototype is ~2x2x1cm and is held next to the IPA instrument in the image below.  CATS (Conceptual And Tiny Spectrometer) is a possible concept instrument based on our findings. CATS - Conceptual and Tiny Spectrometer

As a practical demonstration of the technology CATS will be the analyser on the PoleCATS student sounding rocket experiment.

SIMION (sim ion) is software used to simulate the electrostatic fields inside plasma analysers. This enables virtual electrons and ions to be flown through the fields and tracked.

We have built extension toolkits to this with IDL which allow the instrument parameters of plasma analysers to be extracted from these simulations. Further extensions we have developed, allow for highly automated modelling of different analyser geometries, with highly detailed outputs. This is described further here. 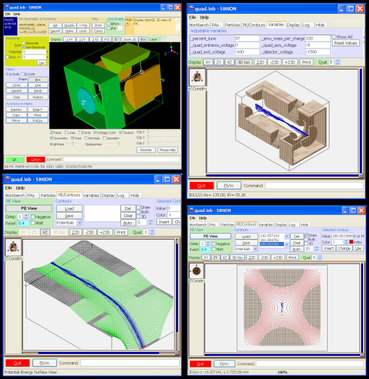 Geant4 is a tool-kit that employs the Monte Carlo technique to simulate particle transport and interactions within a user-defined instrument assembly. This powerful technique is used for the detailed design and modelling of ground and space-based instruments.

Geant4 is also used to estimate the effects of highly energetic charged particle radiation on the instrument's subsystems. This type of radiation is encountered in regions such as the Earth's Van Allen belts, during Solar Particle Events and in Galactic Cosmic Rays which permeate the entire solar system. Over the course of a mission the radiation that penetrates through the instrument degrades the performance of its electrical components and can lead to catastrophic breakdown. Thus it is important to estimate these effects beforehand to mitigate the risk. Several applications exist, based on Geant4, that are used for this purpose: Spenvis, SSAT and MULASSIS.

Research is under-way to develop electron sources to test the electron response of various plasma instruments.

One of the most versatile and common source of electrons is that produced by photo-cathodes which are irradiated with UV photons. These sources can span the energy range from a few electron volt to several kilo-electron volt. We currently have two such systems in place.

An alternative source is also being developed which involves shining UV light onto a Multi-Channel Plate (MCP). This source benefits from the high gain of an MCP and thus has a high flux output however the beam energy is typically only up to several 100 eV.