As part of SAS processing a linear aspect correction for each individual image is computed and applied. Detected sources are compared to the USNO-B1.0 source catalogue and a correction in RA and Dec is converged upon by source matching. The correction is further refined after observation images are mosaiced. Fields with too few sources (N < 4) or offset solutions that yield an rms difference > 1.0 arcsec between detected sources and USNO matches are rejected during the screening process. The best-fit offsets for the remainder are displayed in Figure 1. 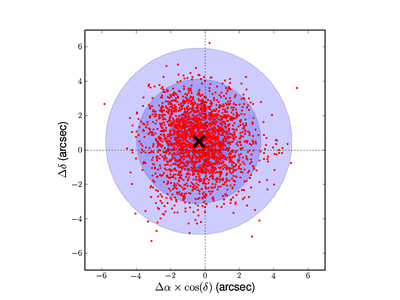 Fig 1: Using source correlations between the XMM-OM and USNO-B1.0 catalogues, systematic corrections are applied to the recorded XMM pointings and source positions. The above plot summarizes the full sample of offsets applied in both the RA and Dec directions (red dots). The black cross is the mean correction and the blue circles represent 1-, 2- and 3-σ radii from the mean. This plot was made using XMM-SUSS.

The directionally-averaged root-mean-square dispersion of the offset distribution is 1.81 arcsec which places a characteristic value on the stability of XMM-Newton pointing. The black cross represents the mean of the plotted sample and it does not occur at the origin, indicative of a systematic offset in spacecraft pointing, <Δαcos(δ)> = −0.36 arcsec and <Δδ> = +0.50 arc sec.

Figure 2 provides the distribution of angular offsets between individual sources and their best USNO matches. The red population are sources before astrometric correction, the green distribution is the same sources after the best-fit corrections are applied. The most common offset after correction is 0.3 arcsec. 50% of detected sources are within 0.7 arcsec of their counterparts. 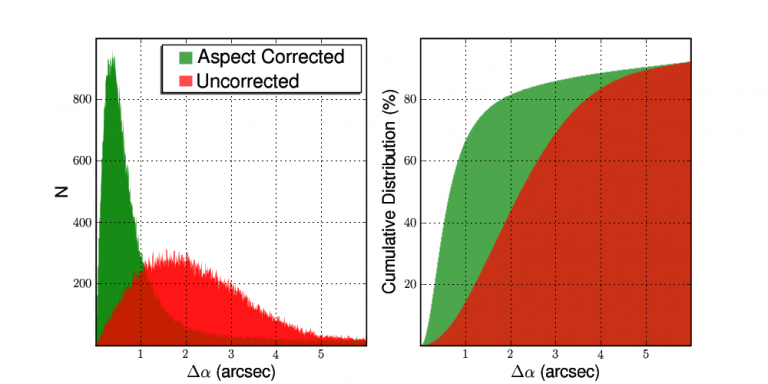 Fig 2: Left: Distribution of angular offsets between all detected source and their most likely matches in the USNO-B1.0 catalogue before (red) and after (green) the astrometric correction. Right: The same sources presented as a cumulative distribution. These graphs were made using XMM-SUSS.

10% of catalogued sources have no USNO counterpart within a distance 5 arcsec. At separations > 5.5 arcsec the aspect corrected and uncorrected distributions are essentially identical. This is a consequence of the OM sample reaching deeper than USNO-B1.0.