Debye is a mission proposal for ESA’s F-Class programme. Debye is a thermal electron telescope that will study electron heating in plasma.

The launch is planned for 2028, and it will fly to the Lagrange point L2, which is located on the nightside of the Earth.

Listen to an interview on the Debye mission given by Daniel Verscharen at the 2018 AGU Fall Meeting: https://archive.storycorps.org/interviews/an-interview-with-daniel-verscharen/

Debye will answer the science question “How are electrons heated in astrophysical plasmas?”

Understanding the energy exchange and transport in plasmas is key to understanding the energisation and acceleration of particles throughout the universe. Therefore, our science question and objectives are critical outstanding problems for all fields of plasma physics, reaching from astrophysics to laboratory plasmas.

The main spacecraft will carry the following instruments:

The deployable spacecraft will carry only one instrument:

The Debye mission instrumentation is provided by an international team of experts in space plasma physics. The following organisations provide hardware support to Debye: 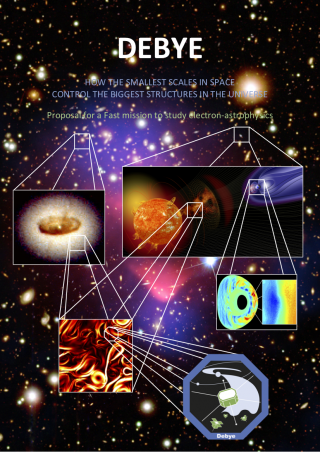