The Hebrew and Jewish collection comprises chiefly rare books and pamphlets on a wide variety of Jewish topics. The collection is of national and international importance.

It includes an extremely rare 14th century Castilian Haggadah, a 16th century Mahzor and 8 incunabula including a 1489 edition of Summaripa’s Martyrium Sebastiani.

The rare book collection comprises the Mocatta, Gollancz, Wolf, Solomons and Myers libraries and dates mostly from 16th-18th centuries. The subjects covered are chiefly liturgies, Bibles, commentaries, editions of Mishna, works on the Cabbalah, sermons, polemical tracts, service books, grammars and dictionaries. Some examples of titles from the collection include: Burnet's The conversion and persecution of Eve Cohan (1680), George Foxe's A visitation to the Jews (1656) and Prynne's A short demurrer to the Jewes (1656). Also of note is a service book of the Roman rite, printed in Bologna in 1537, on vellum with gold initials. 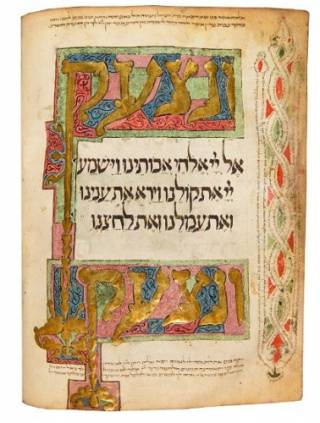 The Jewish pamphlets collection covers a wide range of subjects from the field of Jewish Studies, particularly Anglo-Jewish history, Zionism, British Mandate Palestine and the State of Israel as well as liturgy. The pamphlets date from 1601 onwards, and are in English, Hebrew and a number of other languages. Many of them are held in very few libraries, while some are extremely rare.

There is also a substantial collection of Yiddish pamphlets.

UCL Special Collections also holds on deposit a substantial number of items from the library of Judith Lady Montefiore College.

The core of the collection was the Library of the philanthropist, scholar and community leader Frederic David Mocatta, deposited in 1905 by the Jewish Historical Society of England.

The libraries of Sir Moses Montefiore, Moses Gaster, Hermann Gollancz, Israel Abrahams and Lucien Wolf were added before enemy action in 1940 destroyed much of the collections, apart from the rare books and manuscript material which was stored safely in the National Library of Wales. The main library collection was rebuilt from many sources, including the Salomons collections from the Guildhall Library, the collections of Asher Myers and Alexander Altmann were added later.

The majority of the collection is catalogued and can be searched via Explore. To browse the records for the Jewish pamphlets collection, conduct a search for JEWISHPAMPHLETS, without spaces, on Explore.

A selection of the most significant Jewish pamphlets, principally from the Mocatta and De Sola collections, has been digitised and is available to browse on the UCL Digital Collections website.