Printed, manuscript and archival collections of Hebraica and Judaica which are of national and international importance.

The collection can be searched in Hebrew or English. 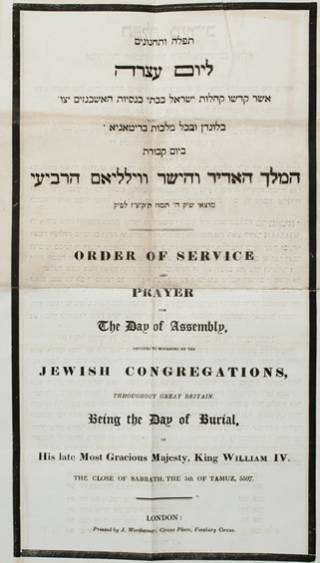 UCL Library Services holds printed, manuscript and archival collections of Hebraica and Judaica which are of national and international importance, including several significant pamphlet collections.

These collections formed part of the Mocatta Library, which was jointly founded by UCL and the Jewish Historical Society of England in 1906, after the philanthropist and bibliophile Frederic David Mocatta left his vast library to the Society. Mocatta's collection was enriched by other donations and purchases in the early 20th century, becoming one of the finest and most comprehensive Jewish Studies libraries in the United Kingdom. Tragically, the library was destroyed by bombing in 1940; only the rarest books, pamphlets and manuscripts survived, having been moved to Wales for safekeeping.

However, the library was quickly re-constituted through donations from many individuals and organisations, including the Jewish collections of the Guildhall Library, and the extensive libraries of the journalist Asher Myers and the American scholar Cyrus Adler. It continued to be enlarged after the war; notable additions to the pamphlet collection came from the libraries of the historian Albert Hyamson and the Canadian rabbi Aaron David Meldola de Sola. The Mocatta Library was merged with UCL's other Jewish collections in 1990.

The pamphlet collections cover a wide range of subjects throughout the field of Jewish Studies, particularly Anglo-Jewish history, Zionism and liturgy. The pamphlets date from 1601 onwards, and are in English, Hebrew and a number of other languages. Many of them are held in very few libraries, while some are extremely rare.

In 2016 UCL Library Services embarked on a project to digitise a selection of the most significant Jewish pamphlets in the collection, principally from the Mocatta and De Sola collections. The pamphlets are searchable in both Hebrew and English.