These images from the archives of UCL are some of the earliest evidence of Japan's first contacts with the west, between the missions of the early 1860s and the full Meiji restoration of 1868. 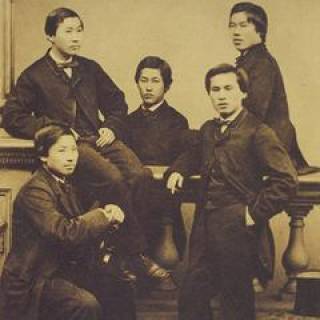 In 1863, five young Samurai students of the Choshu clan were smuggled out of Japan and travelled to England. At this time, Japan was a closed society, where travel abroad was a capital offence.

The students were placed into the care of Alexander Williamson (1824-1904), professor of Chemistry at UCL, and his wife Emma. UCL was still the only university in the UK that accepted students irrespective of race or religion, and four of the Choshu group studied analytical chemistry under Williamson.

Ito Hirobumi eventually became Japan's first Prime Minister in 1885. He established the cabinet system of government in Japan and drafted the constitution of 1890. The other students made similarly significant contributions to the transformation of Japan, in government, finance, the railways and education, from feudal society to world power.

Two years after the Choshu group's arrival, 19 young samurai from the Satsuma clan followed, 14 of them enrolling at UCL. They too went on to hold major positions in Japanese public and commercial life. Mori Arinori, for example, became Japan's first minister of education, and Machida Hisanari the curator of Japan's oldest museum - now the Tokyo National Museum.

The images collected here from the archives of UCL are some of the earliest evidence of Japan's first contacts with the west, between the missions of the early 1860s and the full Meiji restoration of 1868, in which Ito played such a vital role.